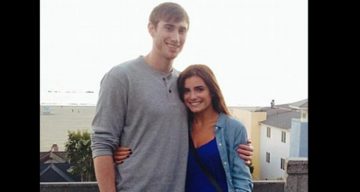 NBA star, Gordon Hayward made the smartest move of his life when he married his girlfriend, Robyn. The couple has two lovely daughters and are a very happy family. While Gordon is out on the basketball court, Robyn supports him at home with the kids.

They Got Married Quickly

Robyn Hayward’s maiden name is Van Vilet. It is not known how they met, but they both went to school in Indiana. When Van Vilet graduated from high school, Hayward was 23 years old. They dated for about five months before realizing that they wanted to spend their lives together. They got engaged on Christmas Eve and shared the news on Robyn Hayward’s Instagram account. The couple got married on May 24, 2014 at St. Simon the Apostle Church in Indianapolis. On June 6, 2015, they welcomed their first child, a daughter named Bernadette Marie Hayward, into their family.

She was a Volleyball Player

On July 11, 2016, Robyn and Gordon Hayward welcomed their second child, another daughter named Charlotte Margaret Hayward. Robyn decided to become a full-time mother while Gordon played basketball. However, he is not the only athlete in the family. Robyn was a star on the volleyball court during her time in high school at Indianapolis Bishop Chatard. They won the state championship in the 2012 season thanks to Robyn’s excellent skills on the court. Though Robyn Hayward’s height is only 5’5″, she was an amazing defensive specialist. She was ranked the number four player in Indiana during her senior season. Unfortunately, she did not pursue collegiate volleyball.

Philanthropy Runs in Her Blood

Robyn Hayward has always been a philanthropist, handing out food to the needy with members of her church. She likely gets this from her family, who work with a school in Magdalena, Guatemala, teaching students carpentry, art, baking, and several other skills. Hayward attended at least one year at a cosmetology school after graduating from high school in 2013.

Ash Wednesday:: if you're not Catholic and wonder why the heck we do this I can explain.. we don't wear our ashes to proclaim our holiness but to acknowledge that we are sinners that are always in need of repentance and renewal! #yaylent #neveraperfectcross

Robyn Hayward absolutely loves her little girls. This is very evident from her Instagram account. Robyn Hayward’s Instagram account is full of pictures of her two daughters, as well as pics of her doting husband with their girls, and the family spending time together. It is obvious that Robyn and Gordon Hayward have put the well-being and happiness of their family above everything else.