Friends celebrates 25 years on the pop culture landscape on September 22, and could it BE any better? Well, Google sure did it! Much like it Thanos-snapped the web to celebrate the release of Endgame, the search giant has created special Easter eggs for the Friends anniversary. If you haven’t done your weekly ritual of searching at least one Friends character for the heck of it, here’s what you need to be looking forward to.

The One with “The Rachel”

Jennifer Aniston’s legacy from Friends was that iconic, unmistakable haircut. So if you look up Rachel Green on Google, you can find a version of her haircut under her images.

Clicking on it will redirect you to Google Images with pictures of The Rachel. You know, in case you want to show your hairstylist what you want before the Friends 25th anniversary party.

The One with “Pivot!”

If you can’t resist yelling “Pivot!” every time you move a chair, you’re going to love Ross’ Easter egg. His legendary couch-moving scene from season 5 tops his “We were on a break!” and three-divorce jokes.

And Google has taken it up a notch with the famous beige couch from this scene. Clicking on it will “pivot” your page askew until the couch icon snaps in half. A bonus is Ross’ soundbite yelling “Pivot” with each click.

The One with Monica’s Cleaning Supplies

Life would be great if we had a cleanliness-obsessed friend like Monica who knew how to get that ketchup stain off the couch. It’s only right that Monica’s icon is a bucket of suds.

Click on the bucket and a magic sponge cleans Monica Geller’s name until it’s sparkling. Perfect for the high-maintenance queen.

The One with the Fowl

Chandler took a while to warm up to the chick and duck he and Joey had as pets. Who can forget Chandler introducing his feathered friends to Baywatch and the comfort of the La-Z-Boy recliners?

There are just too many iconic moments for Chandler to pick from! But Google did him justice with the recliner icon, which introduces us to Yasmine and Dick, the chick and the duck, waddling around the page.

The One with the Smelly Cat

Phoebe Buffay is a pop icon and “Smelly Cat” is the comedy anthem of the ‘90s. Don’t @ me. Her guitar icon is the perfect representation of Central Perk’s resident songstress.

Clicking on the guitar triggers an animated smelly cat stinking up your screen to the sounds of Phoebe’s best rendition of “Smelly Cat.” The background laughter in the soundbite makes this even better.

The One with All the Food

There’s only one universal truth that holds up in our world, and that is, Joey Tribbiani doesn’t share food! Google gave him his most favorite food, a pizza slice, which leads to a rain of more food for Joey.

That is, until Joey’s hands gather all his food, yelling “Joey doesn’t share food!” You’ve been warned!

The One with Our Favorite Phrases

It might seem like a missed opportunity to not use quotes like “We were on a break” and “How you doin’?” but Google has a special offering for all the popular phrases from the show.

Google “Friends glossary” and you’ll be greeted by the show’s most famous terms, including “moo point,” “unagi,” “on a break,” “woopah,” “hand twin,” and more. 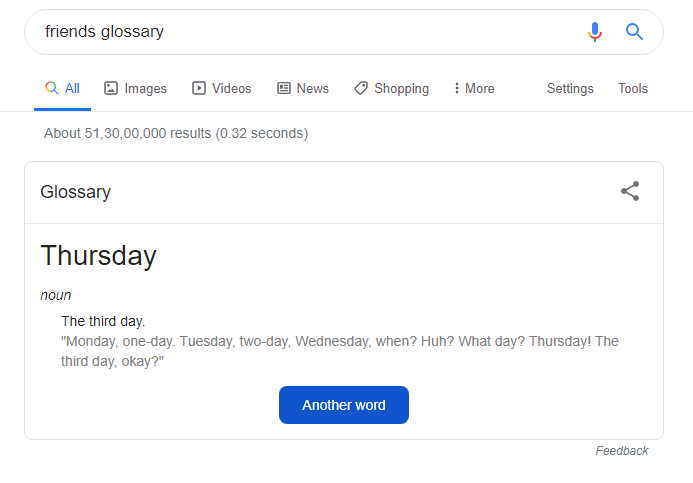 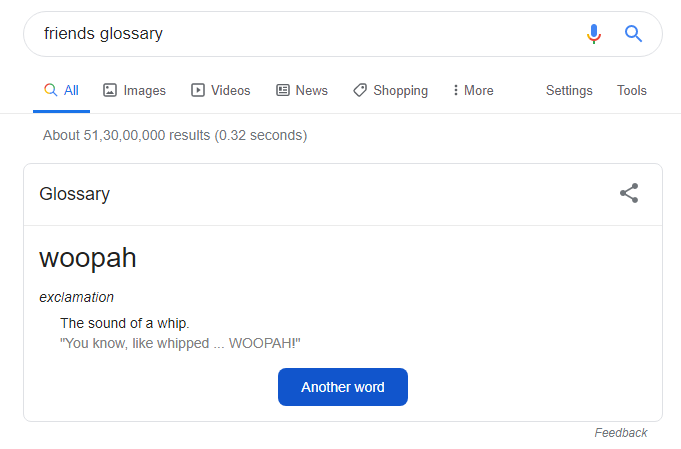 The real and unreal meanings of each word, with a hint of Chandler-brand sarcasm and the correct usage of the term from Friends itself makes this glossary the best nostalgic tool.

Hey @Google, loved the Friends Character name search thing you are doing. It is funny and nostalgic.#Friends #Google

Happiness is: clicking on that guitar on Google ❤#Phoebe #FRIENDS