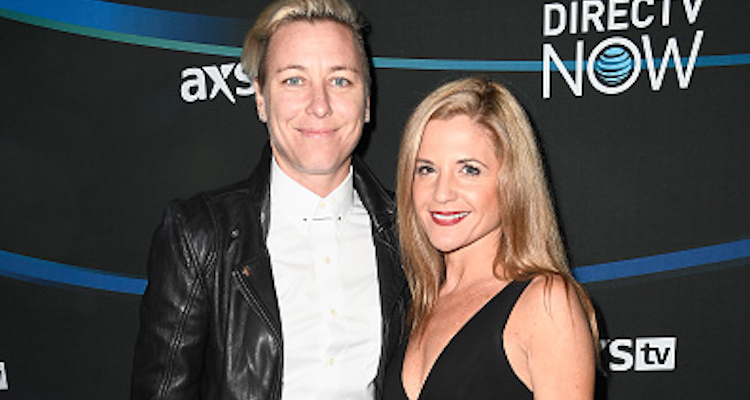 Here come the brides! If you haven’t heard already, Glennon Doyle Melton and Abby Wambach got hitched on Sunday. In a time of political controversy, a bit of wedding news might just be the welcome distraction people need. We know you’re dying to learn more about her, so here’s your chance to get to know Abby Wambach’s wife.

Glennon Doyle Melton’s net worth is estimated to be $4.0 million, due to her best-selling books and her blog called Momastery. She’s referred to as a “Christian mommy blogger” and has written books such as Love Warrior and Carry On, Warrior. She’s also the founder of Together Rising, which is a non-profit group that has raised millions for families around the world through its Love Flash Mobs, which have changed online generosity.

My beloveds – please never give up on love. Life could surprise the hell out of you. Trust me- you might just wake up one morning and find yourself smackdab in the middle of heaven. I love my wife. LOVE WINS. @abbywambach #DoyleWambachAF

On Sunday (May 14), retired USA soccer star Wambach, 36, tied the knot with blogger and author Melton, 41. On Glennon Doyle Melton’s Instagram, the newly weds shared a kiss as Wambach wore a red velvet blazer, while Melton wore a silver bejeweled dress. In a second Instagram post, Wambach was pictured wearing a black hoodie with the phrase, “Christian Mommy Blogger’s Wife” on it.

“My beloveds- please never give up on love,” Melton wrote in the caption. “Life could surprise the hell out of you. Trust me- you might just wake up one morning and find yourself smackdab in the middle of heaven. I love my wife. LOVE WINS.”

The couple confirmed they were dating in November last year and revealed the news on Melton’s Facebook page, announcing their engagement in February.

“Feels like the world could use all the love it can get right now,” she wrote. “So today, I’m going to share with you my new love.”

Glennon had three kids with her ex-husband —son Chase and daughters Tish and Amma— and she spoke to them about her homosexuality and what it meant to her.

“Figuring out my stance on homosexuality felt like a life and death decision,” she wrote in a 2013 post on her blog Momastery. “I know my Jesus, I love Him, and I think if he needed me to believe that homosexuality was a sin, He would have mentioned it.”

She added that she hoped that her coming out would help her three children feel emboldened to be truthful with themselves and others.

Melton wrote, “When Craig and I sat them down to tell them about Abby I started by saying: ‘In our family, we live and tell the truth about who we are no matter what, and then love each other through it — and I’m about to show you how that’s done.’”

Some of you may not be aware of Wambach’s DUI arrest that forced her to confront her substance abuse, but it’s one of the many things that she and Melton had in common. In a Facebook post via People, Wambach took full responsibility for her car crash and gave a heartfelt apology.

“That night getting arrested was one of the best things that has ever happened to me. Because if I don’t get so publicly shamed and publicly humiliated, I don’t think I wake up,” she added. “I think I was asleep for a lot of years. Asleep to the pleas from my family and friends, and even myself, to get help. So that night I was humiliated enough to wake up.”

Melton struggled with drugs early on in her life and used it as a way to cope.

“For twenty years I was lost to bulimia and alcoholism  and bad love and drugs,” Melton said in her blog Momastery. “I suffered. My family suffered. I had a relatively magical childhood, which added an extra layer of guilt to my pain and confusion.”

She added: “My best guess is that I was born with an extra dose of sensitivity to love and pain. I didn’t want to walk through the battlefield of life naked. So when I was ten years old, I made up my own little world called addiction and I hid there for decades. I felt safe. No one could touch me.”

It was the birth of her children that gave her the wakeup call she need and now both women have been sober ever since their battles with drugs.

Congratulations to the newlyweds and we wish them the best!

Amma was our yoga instructor this morning. Happy Mother's Day and Namaste, beloveds! Thank you @amybpaulson !