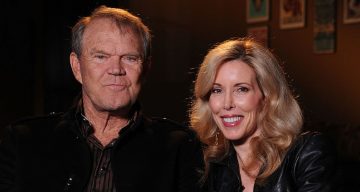 Glen Campbell was a colossal and legendary figure in country music starting in the early 1960s until 2012, when he was diagnosed with Alzheimer’s disease. Campbell was married four times and had eight children with his wives. At the time of his death, Campbell was married to his fourth wife, Kimberly Woollen. The “Rhinestone Cowboy” and “Wichita Lineman” singer left behind a treasure trove of rich original music.

Country music lost one of its biggest stars with Glen Campbell’s death on August 8, 2017, at the age of 81. Campbell was a  singer, songwriter, musician, actor, and television host who shot to fame in the mid 1960s with hit songs like “Gentle on My Mind,” “I Wanna Live,” “By the Time I Get to Phoenix,” and “Wichita Lineman.” He won four Grammy Awards in 1967 for his songs “Gentle on My Mind” and “By the Time I Get to Phoenix.” Campbell reportedly died of complications due to Alzheimer’s disease in Nashville, Tennessee, almost six years after he was diagnosed. He left behind his wife Kimberly Woollen, three ex-wives, eight children, and 10 grandchildren. Keep reading for some details about Glen Campbell’s wives right here.

How many wives did Glen Campbell have? Throughout his long and productive life, the country singer had four wives. He had been married to Kim Woollen since 1982 until the time of his death. Campbell married his first wife, Diane Kirk in 1955 at a very young age. At the time, he was only 17 years old, and she was 15 and pregnant. Campbell said that he married Kirk because he “believed in taking responsibility” for his actions. Their child died early in its infancy, but they stayed together and later had a second child, a daughter named Debby. But their marriage did not last long after that, and they divorced in 1959. By all accounts, the divorce was without any lasting bitterness.

Campbell got married for the second time in 1959. His bride was Billie Jean Nunley, a beautician from Carlsbad, New Mexico, and the marriage lasted for almost 16 years. According to People magazine, it was Nunley who divorced him. The couple had three children from their marriage: Kelli, Travis, and Kane.

Without missing a beat, Campbell married for a third time in September 1976. This time it was to his friend, Mac Davis’s ex-wife, Sarah Barg. Campbell told People at the time, “I can’t be alone. We’re going to get married as soon as all the papers are in.” They had one child named Dillon, but the couple later divorced in 1980, just three weeks after Dillon’s birth.

Campbell then met Kimberly Woollen on a blind date in 1981, when she was a Radio City Music Hall Rockette. Campbell was 46 years old and Woollen was just 24 when they tied the knot in 1982. It seems that Campbell worked very hard to make this marriage work and hoped this would be his happily ever after. “I pray this is it. I believe it is,” Campbell said in an interview regarding Woollen. Woollen brought some much-needed peace to his otherwise tumultuous life, and they had three children together, Cal, Shannon, and Ashley, who later joined their father’s touring band in 2010. All of Glen Campbell’s kids were important to the singer. He was raised as a member of the Church of Christ, but later joined a Baptist Church in Phoenix with Woollen. In a 2008 interview, the couple revealed that they followed Messianic Judaism for almost 20 years.

Woollen took care of Campbell until the final moments of his life. In 2014, he was moved to an Alzheimer’s care facility so that he could get better and professional medical care. After his death, his daughter Ashley Campbell gave a heartfelt tribute to her father saying, “I owe him everything I am, and everything I ever will be. He will be remembered so well and with so much love.” Rest in peace, Glen Campbell.