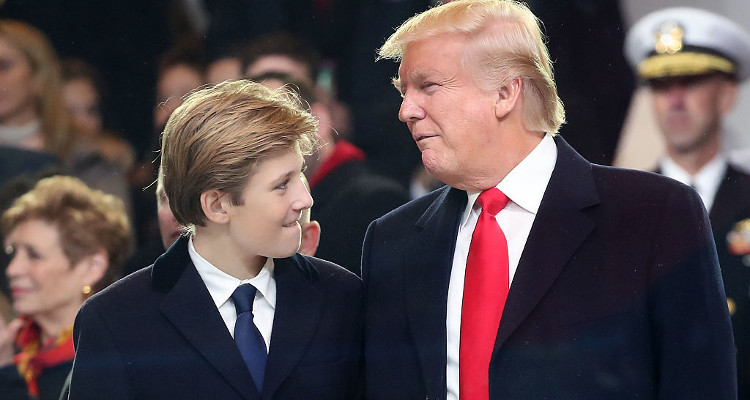 The Internet has exploded with searches for Barron Trump’s alleged “neurological disorder,” after SNL writer, Katie Rich was suspended for calling the 10-year-old “the country’s first homeschool shooter.” Ouch.

Donald Trump was sworn in as the 45th President of the United States on January 20, and millions of viewers tuned in from all across the globe to watch it happen. As all eyes were glued on Trump, some unwarranted attention was given to President Trump’s 10-year-old son, Barron Trump, and memes of his reactions at the inaugural events went viral almost overnight. The trend began in November 2016 when then-President-Elect Trump gave his acceptance speech, and a sleepy and confused looking Barron groggily stood on stage beside his parents. Since then, the youngest heir to the Trump fortune has become the butt of unpleasant jokes circulated by Internet bullies. The latest in the line of insensitive digs targeted at Barron Trump was the tweet from SNL writer, Katie Rich, who was immediately suspended following her offensive comments towards the innocent child. Here is everything you need to know about Barron Trump’s wiki, age, photos and net worth, and the Internet’s unhealthy obsession with Barron Trump’s “neurological disorder” and “autism.”

As Donald Trump took the oath of office, a Twitter storm exploded after Saturday Night Live writer, Katie Rich tweeted out, “Barron will be this country’s first homeschool shooter.” Following a social media outcry, the 33-year-old was suspended from the show indefinitely by NBC, and her name was taken out of the credits that aired after SNL on January 21. The show has gone after Trump countless times, with Alec Baldwin donning the controversial billionaire’s persona for skits based on the presidential campaign. However, it seems that one SNL writer took things a tad too far, by making callous and insensitive remarks about Barron, who is merely an innocent child and has no control over his father’s decisions as president.

I sincerely apologize for the insensitive tweet. I deeply regret my actions & offensive words. It was inexcusable & I'm so sorry.

The tweet sparked a national debate about the actions of Katie Rich and whether Barron was to be blamed for his father’s mistakes. The writer in question subsequently deleted the tweet, and quickly changed all her social media settings to private. On Monday, January 23, Rich resurfaced on Twitter and apologized for her “offensive words,” saying that she regretted her “inexcusable” actions. She was hired as a writer for SNL in December 2013, and has been nominated, along with her fellow cast members, for a Writer’s Guild Award last year.

President Trump has lashed out at SNL in the past, following his comical portrayal in the parody of the presidential debates in October 2016. After Trump’s first press conference as the President-Elect, Alec Baldwin reprised his role mocking Trump. The next day Donald Trump addressed the parody and tweeted out, “NBC News is bad but Saturday Night Live is the worst of NBC. Not funny, cast is terrible, always a complete hit job. Really bad television!” 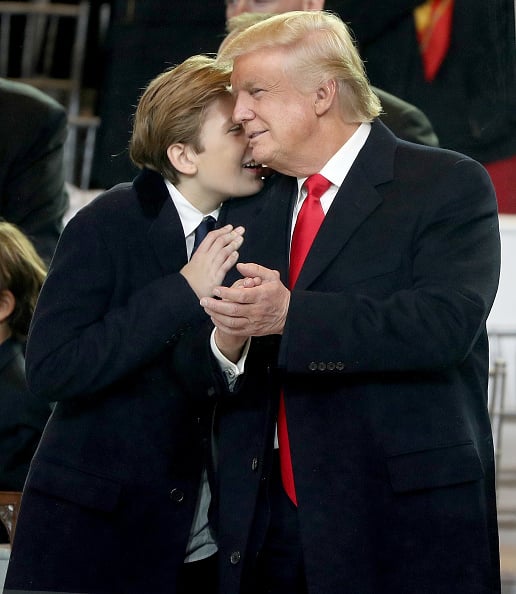 Since President Trump’s acceptance speech on November 9, 2016, social media has heavily gone after Barron Trump, making him the target of unpleasant jokes and memes that have gone viral. Hundreds of memes and tweets criticizing the 10-year-old have been shared thousands of times, calling out his reactions to his father’s presidential duties during public events. Overlooking the fact that Barron is just a child, online bullies subjected the youngest Trump to a series of cruel taunts, speculating that he was suffering from a neurological disorder and was on the autism spectrum; possibly even on the high-functioning end with Asperger’s Syndrome.

The shocking rumors surrounding Barron Trump’s mental state escalated when people took to social media calling the 10-year-old child “odd,” “different,” and “autistic,” simply because he is Donald Trump’s son. Adjectives used to describe Barron include him having “dead eyes,” “serial killer looks,” or being just plain “creepy.” It seems unfair that the child is being subjected to such horrendous levels of cyberbullying, simply by virtue of being Trump’s youngest offspring. This is unjust, unwarranted, and ideally Barron should be left to his own devices like any other child. 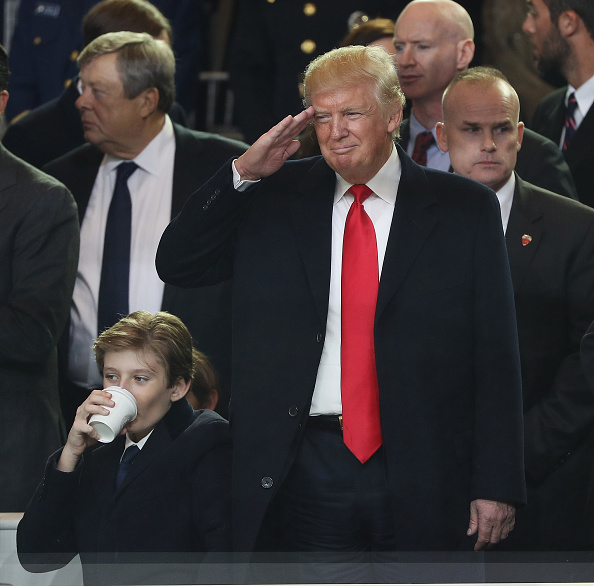 It can easily be pointed out that Barron was born into his family, it wasn’t a choice. There’s no doubt that being Trump’s son is a double-edged sword; while Barron is swimming in the lap of endless luxury and extravagance, he is also forced to make televised public appearances until 3:00 a.m. (Many remember the Internet going crazy because he was falling asleep at his father’s victory ceremony, but maybe forgot he was only 10 years old!) The ridiculous allegations of Barron being on the autism spectrum stemmed from photos and videos of him looking bored and disinterested during the inaugural events, or simply playing peek-a-boo with his baby nephew. Again, he’s a 10-year-old boy, probably more consumed with video games than politics at this point in his life. Then again, what 10-year-old boy isn’t?

The hurtful sentiments have been echoed by thousands of social media users across all platforms, who are frantically Googling “Barron Trump neurological disorder,” in an attempt to find out more. The fact of the matter is that Barron’s behavior mirrors that of any other child, and the hordes of self-proclaimed medical experts are basing their accusations on information from bullies.

If the situation wasn’t bad enough already, certain celebrities have also chimed in, including Modern Family star, Julie Bowen. The 46-year-old actress was slammed for poking fun at President Trump’s son in a series of tweets using the hashtag “Barron for President.” She posted multiple photos of Barron fixing his hair and doing other things while sitting behind his father, implying that he was confused about how Trump could run an entire country. Bowen found herself in hot water after captioning her posts with statements like, “I think Barron is on his Gameboy. Can’t say I blame him.”

The award-winning star plays the role of Claire Dunphy on Modern Family, a mother of three precocious children with wildly different personalities. In one post she wrote, “Barron, a voting majority shares your horror,” while captioning another, “When your dad is boppin’ his head to the Mormon Tabernacle Choir.”

When your dad is boppin' his head to the Mormon Tabernacle Choir. #dadshame #barronforpresident

Also Read: Barron Trump Wiki: Age, Net Worth, School and Everything You Need to Know

Bowen even chided CNN for cropping Barron out of a shot and received widespread backlash for her posts. While she may have intended to share the Instagram posts in good faith, Bowen was criticized for victimizing the child, despite being a mother of three young sons herself. After the social media storm, Bowen defended herself by saying how she loved that Barron was “a kid being a kid,” and was “just trying to keep it light.”

.@MyraLisa I love that Barron is a kid being a kid. My kids would be a horror show at a public event! Just trying to keep it light.

Meanwhile, Hillary Clinton’s daughter Chelsea Clinton, tweeted out in support of Barron saying he “deserved the chance every child does-to be a kid.” Although the tweet garnered Chelsea Clinton plenty of support for publicly calling out haters, she simultaneously faced backlash for the tweet’s political undertones after posting, “Standing up for every kid also means opposing @POTUS policies that hurt kids.” The thinly-veiled insult (targeted at President Trump) did not go unnoticed by his supporters, who were quick to point out how she seized the opportunity to push an agenda. 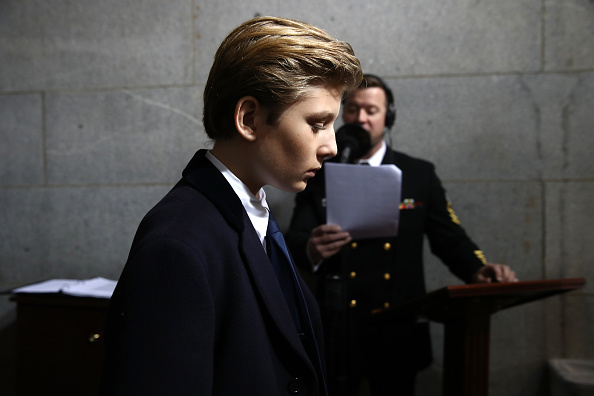 Chelsea Clinton was only 12 years old when her father was inaugurated in 1991. At the time, her appearance was hurtfully mocked by both SNL and talk show host Rush Limbaugh. There is a long history of the media passing rude and inconsiderate comments about presidential children. Ranging from racist comments about Sasha and Malia Obama to calling Chelsea Clinton “the White House dog,” it is truly unfortunate to see adults picking on children, and it’s about time we abandon this cruel tradition and leave young Barron Trump alone.