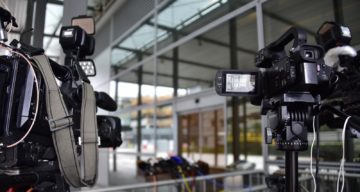 Gina Glaros has been a favorite personality among Louisville, Kentucky residents, who have been watching her on WDRB-TV since 2016. So when the news anchor announced she is leaving the Fox affiliate in 2021, they were sad to see her go. Her announcement was met with several questions from her social media followers. They want to know why she is leaving WDRB, where she is going next, and if she will continue to live in Kentucky. Here’s what Gina Glaros had to say.

Gina Glaros was born on July 13, 1987 in Ohio, but grew up in Indiana. Her parents, Greg and Cynthia Glaros, and younger brother, Jonny Glaros, continue to live in Indiana.

While she was a student at Indiana University–Purdue University Indianapolis, she interned at the Indianapolis station, WTHR 13. She graduated with a BA in communication studies and journalism in 2010.

Glaros started as a producer at Comcast soon after graduation. She also worked as a reporter at Indiana-based stations.

Glaros left her home state in 2016 to move to Kentucky. She had been an anchor on WDRB News in Louisville since then.

The station canceled Glaros’ segment, Gina on the Job, during the pandemic. Last week, Glaros’ colleague and meteorologist, Katie McGraw, had left the station.

She stated that she will be helping her family run their longtime business. In case you’ve missed, Glaros is a bonafide “Ice Cream Connoisseur,” since her family has been in the frozen treat-making business for decades.

Greg and Cynthia Glaros opened their first ice cream store, Handel’s Homemade Ice Cream, when Gina was 13. Gina was a shift manager, trainer, advertising model, and spokesperson for Handel’s from 2002 to 2010.

Greg is the president of GG Ice Cream, Inc., the company that owns and operates Handel’s locations all over Indianapolis. Gina will probably help him run the business for a while.

But that means we won’t be seeing Gina Glaros on television anytime soon. She nonetheless assured her fans she might take up the opportunity to work for a station in Indiana.