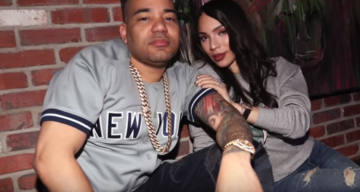 Never talk smack about a man’s family! That’s what Desus Nice and The Kid Mero learned earlier this morning when they were guests on the hit radio show, The Breakfast Club. DJ Envy’s wife was the topic of an earlier discussion on Desus&Mero and fans couldn’t believe what they were hearing.

Did you miss what Desus and Mero said about DJ Envy’s wife? Do you know who DJ Envy is married to? Her name is Gia Casey and clearly, her husband’s got her back! Since the heated argument about the things Desus and Mero said about her on their show, fans have been digging to try and learn more about her. Don’t worry because we have what you need with our Gia Casey wiki.

Who Is Gia Casey?

Gia Casey, age 40, and DJ Envy (who’s real name is Rasshaun) were high school sweethearts and have been married since 2001. The couple have five kids together: daughters Madison, London, and Brooklyn and sons, Logan and Jaxson.

Casey has always been a devoted mother and wife but her marriage became strained when her husband publicly admitted to an affair in 2013. It garnered a lot of bad publicity for the couple and DJ Envy opened up about his mistake on more than a few occasions. The woman’s name was Erica Mena and he came out publicly in 2013 to admit the affair.

Since the, Envy and Casey have worked on their marriage and they seem to be doing very well. At one point, they even hosted their own podcast together called The Casey Crew. Today, the two seem to be better than ever!

If you’re looking for personal pics of DJ Envy’s wife, then her Instagram account (gia_casey) is the right place to be.

She has 272k followers and has posted over 1,000 photos, which usually involve her family and a lot of fashion. It’s the best place to reach her if you need to say hello or just to compliment one of her many stunning pics.

So, What Exactly Did Desus and Mero Say?

On an episode of the late night show Desus&Mero, the hosts poked fun at an appearance made by DJ Envy and Casey on the daytime talk show, The Real. But many of their jokes were made at Casey’s expense and DJ Envy did not take kindly to their banter.

In the clip, they implied that Casey didn’t go through with the divorce because she was too busy cashing “DJ Envy’s checks.” They even made a couple digs at Envy himself.

But this morning, on The Breakfast Club, DJ Envy decided to let them both know how he truly felt about the things they said.

“You can talk about me all day, you can make jokes at me, but when it comes about my wife and my family, it’s a little disrespectful,” he said.

He also said that, as a married man with children, Mero should know better than to make those comments.

“You should know that immediately…[my wife thought] it was absolutely disrespectful…never my wife or kids,” he continued.

DJ Envy also commented that his wife has always made her own money and has known him forever. In fact, at one point she was the breadwinner of the family!

“My wife has known me since 15, before I had a dollar. She’s making more money than me. So to insinuate that she was there for a check or she was good with Envy’s check, is a disrespect to me and her.”

In other words, they implied she was a gold digger! Awkward, much?

Desus apologized and said he and Mero had “no malice” when they made their comments on their show. Roasting the person in the spotlight is one thing but many believe that the family is off limits. But then others believe that it’s fair game since they are connected to someone famous.

It’s no surprise that DJ Envy was mad about the joke, especially since his marriage was once strained by his cheating.

There’s no telling who the hosts will roast next but let’s just hope that they’ve learned to keep DJ Envy’s wife and kids out of it!