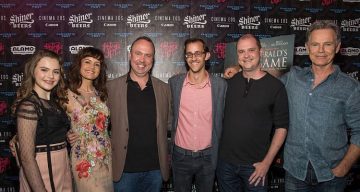 Stephen King’s movie adaptation of Gerald’s Game on Netflix has an official premiere date. Starring Carla Gugino, Henry Thomas, Bruce Greenwood, and Carel Struycken, this horror thriller has been highly awaited. And, it seems like the wait is finally over.

When is Gerald’s Game’s release date? What time does Gerald’s Game come out on Netflix? If these questions have been on your mind, then sit back and relax. We’re going to answer them all.

About Gerald’s Game on Netflix

Gerald’s Game is directed by Mike Flanagan and is based on the 1992 novel of the same name. It tells the story of Jessie Burlingame (Carla Gugino), a woman who accidentally kills her husband, Gerald (Bruce Greenwood), while she is handcuffed to a bed during a sex game. She is stuck in this remote cabin with absolutely no hope of rescue, and starts hearing vague voices and seeing hallucinations, including a spectral figure she calls The Space Cowboy (Carel Struycken).

With the book having only 332 pages, the film is more along the lines of Stephen King’s Misery than like The Stand or It. The story takes place in one room and mostly involves the lead’s internal voices and hallucinations. Sounds pretty interesting, doesn’t it?

Netflix has announced that Gerald’s Game will premiere on September 29, 2017. Yes, that’s tomorrow!

Ever since we’ve watched the trailer, we can’t wait to see the film. If you haven’t seen it already, then you need to right away.

What Time Does Gerald’s Game Come out on Netflix?

Well, if you’re reading this, then there’s good news. Gerald’s Game is already on Netflix.

Stephen King has described Gerald’s Game as haunting and hypnotic. The film has a nine out of 10 rating on IMDb, which means it should be a great film to watch. So, what are you waiting for?