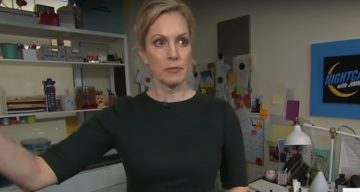 Wentworth is an accomplished actress and comedian who has recently tried her hand at writing. She is married to ABC News anchor and former political advisor, George Stephanopoulos.

Ali Wentworth is a bit down right now but fighting hard to make things better. Her 14-year-old daughter Elliott has to wear a brace every day because she has scoliosis. Wentworth is the wife of Good Morning America’s anchor, George Stephanopoulos, who has a successful career of her own.

Wentworth and Stephanopoulos revealed their daughter’s condition simultaneously on Twitter a few weeks ago by posting a message and pictures of their daughter. Elliott must wear the brace to prevent the sideways curvature of her spine.

Wentworth’s husband tweeted, “So proud of my daughter Elliott. Wearing brace every day. #NationalScoliosisMonth.” Wentworth also tweeted something almost similar. Wentworth has a second daughter named Harper who is 12 years-old.

Here are some more details from Ali Wentworth’s wiki.

Who Is Ali Wentworth?

Ali Wentworth is an actress, comedian, producer, and author, who attended the Dana Hall Schools for Girls in Wellesley, Massachusetts, before graduating from Bard College in Annandale-on-Hudson in New York in 1988.

Wentworth made her start in acting as a cast member and fly girl on Fox’s sketch comedy series In Living Color between 1992 to 1994, where she impersonated celebrities like Amy Fisher, Cher, Hillary Clinton, Brooke Shields, Princess Diana, Sharon Stone, and Lisa Marie Presley among others. Her recurring characters like Candy Cane, an insane children’s show host who has had a string of bad relationships with her male co-workers and the promiscuous teenage daughter of grandpa Jack McGee (played by Jim Carrey), were very popular with the audience.

She appeared in an episode of Seinfeld as well as talk shows like The Tonight Show with Jay Leno, and The Oprah Winfrey Show.

Wentworth acted in TV shows such as Life Among the Cannibals, Big Packages, Trial and Error, The Real Blonde, Felicity, and the currently running series Nightcap. Wentworth also appeared in feature films such as Jerry Maguire, Office Space, and It’s Complicated. Other notable appearances include the comedy Head Case and the NBC show The Marriage Ref.

And that’s not all!

Wentworth is married to George Stephanopoulos who was once President Bill Clinton’s political advisor and ABC News  chief anchor correspondent. They first met on a blind date and got married on November 20, 2001. They are now focusing on the care and welfare of their two daughters, especially Elliott.

Wentworth makes sure that she has time for her family, no matter how busy she is. Despite her multi-dimensional career, Ali Wentworth has become a skilled manager who makes sure that no part of her life is neglected.