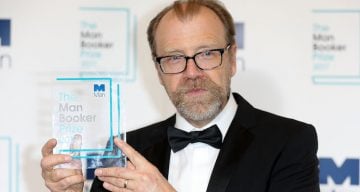 George Saunders’ Lincoln in the Bardo is the recipient of this year’s Man Booker prize, making this the second consecutive win for an American author! One of six authors shortlisted for the award, this is Saunders’ first full-length novel. With over 20 short stories published in The New Yorker alone, he has given us a wide array of novellas, essays, and children’s books for over 25 years. Learn more about the award winning author in our George Saunders wiki.

Based on real events, George Saunders’ Lincoln in the Bardo follows Willie, the son of Abraham Lincoln, who died at the age of 11 and is stuck in limbo —or Bardo. As he waits for his father to find him, we come to learn that the graveyard he’s buried in is full of other souls that refuse to believe they’ve died. The novel has pieces of history with fragments of letters and texts intertwined with Sanders’ fiction to tell his compelling story and ultimately win him the £50,000 prize. This marks the second consecutive year that an American author won the Man Booker prize, which had 144 novels submitted this year. Our George Saunders wiki has more information about the writer’s wife, books, and life.

From Geophysics to Novelist

Before getting his master’s from Syracuse University in 1988, George Saunders graduated with an exploration geophysics degree from the Colorado School of Mines. With a love for reading but never thinking that he could write for a living, he worked in a Sumatran jungle camp for a year and a half before moving back home to take up odd jobs. Referring to this experience, George Saunders quotes literary theorist Terry Eagleton, saying it made him see that capitalism “plunders the sensuality of the body.”

It was when he got into Syracuse’s Master of Fine Arts program that his career truly began. Studying with Tobias Wolff and Douglas Unger, the former geophysicist also met Paula Redick. Did you know? George Saunders’ wife agreed to marry him only three weeks after they met! In less than three years, the two welcomed both of their daughters, Caitlin (born 1988) and Alena (born 1990). To help support his family, Saunders worked as a tech writer for a pharmaceutical company, and then an environmental engineering one. In those few years, he worked on a few failed novels before his first actual book, CivilWarLand in Bad Decline was released, from which the short story, Offloading for Mrs. Schwartz was published in The New Yorker, a publication he still contributes to 25 years later.

Throughout his career, many of George Saunders’ books went on to receive prestigious literary awards. Aside from being a four-time National Magazine Award winner, he was also a finalist for the PEN/Hemingway Award, Story Prize, and National Book Award. While accepting the Man Booker prize, Saunders spoke about the “strange time” we’re currently living in adding, “Do we respond to fear with exclusion and negative projection and violence? Or do we take that ancient great leap of faith and do our best to respond with love? And with faith in the idea that what seems other is actually not other at all, but just us on a different day.”

He also said, “In the U.S. we’re hearing a lot about the need to protect culture. Well this tonight is culture, it is international culture, it is compassionate culture, it is activist culture. It is a room full of believers in the word, in beauty and ambiguity and in trying to see the other person’s point of view, even when that is hard.”

Since his powerful acceptance speech, George Saunders has received a lot of love on Twitter, despite not having an account himself.