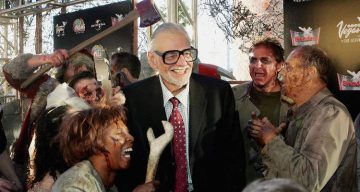 The Walking Dead season 8 premiered with its 100th episode last night (October 22). But the popular show wouldn’t have come this far if it weren’t for one man who started the zombie craze in pop culture. Last night’s The Walking Dead was dedicated in memory of George Romero.

Young The Walking Dead fans may not know who George Romero is, but he’s the Godfather of zombies across movies and TV. The director became a horror icon thanks to his cult classic, Night of the Living Dead, which was considered the start of zombies in pop culture. George Romero passed away recently and TWD paid tribute to him in its season 8 premiere last night. Find out about George Romero’s cause of death and the TWD tribute, right here.

Who Was George Romero?

George A. Romero earned the moniker “Father of the Zombie Film” when he made the 1968 horror classic, Night of the Living Dead. He brought the dead to life in several other films like Dawn of the Dead, Day of the Dead, Two Evil Eyes, and countless more. If it weren’t for Romero, we wouldn’t have zombies on screen —and yes, that means no TWD either.

TWD is no stranger to tributes. It dedicated past episodes to cast and crew members who have passed away. In the season premiere that doubled as the show’s milestone 100th episode, the end credits read, “In Memory of John Bernecker and George Romero.” While Bernecker was part of the crew, Romero wasn’t associated with TWD. But the horror maestro had a great influence on series creator, Robert Kirkman.

Romero never expected that his career would be defined by zombies. “All I did was I took them out of ‘exotica’ and I made them the neighbors,” he said. Zombies were Romero’s cinematic technique to satirize real social horrors like consumerism, social media, and racism. He was noted for using diverse casts in his movies.

How Did George Romero Die?

Both Romero and Bernecker passed away in 2017. Bernecker was a veteran stunt performer who passed away on July 13 after a tragic accident on set. A few days after Bernecker’s death, on July 16, it was reported that George Romero passed away at the age of 77.

According to a statement by his producing partner, Peter Grunwald, the filmmaker passed away in his sleep after a “brief but aggressive battle with lung cancer.” He married three times and has three children: Cameron, Andrew, and Tina from his first two wives.

He died while listening to the score of one of his favorite movies, John Ford’s The Quiet Man with his wife Suzanne Desrocher Romero and daughter by his side. His famous collaborator and horror writer, Stephen King also expressed his condolences.

TWD‘s cast and crew were among the many celebs who expressed their condolences via Twitter, despite the fact that Romero wasn’t a fan of the show. In an interview ahead of his passing, he had said that he was asked by the AMC series producers to direct a few episodes, but he refused.

“Basically it’s just a soap opera with a zombie occasionally,” said Romero. “I always used the zombie as a character for satire or a political criticism and I find that missing in what’s happening now.” He even blamed the lack of substance in current movies and shows on the genre for making it difficult for him to secure funding for his Dead franchise reboots.

“Because of World War Z and The Walking Dead, I can’t pitch a modest little zombie film, which is meant to be sociopolitical. I used to be able to pitch them on the basis of the zombie action, and I could hide the message inside that. Now, you can’t.” But Romero did say he was a fan of the original comic by Robert Kirkman and Tony Moore.

Despite his dislike for TWD, showrunner Scott Gimple says the show and pop culture owes a great debt to George Romero.