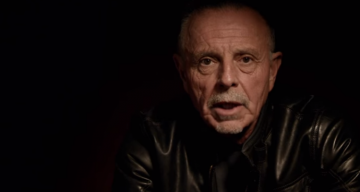 With Lifetime movies like Menendez: Blood Brothers and HBO’s Wizard of Lies, many wonder about the truth behind the stories and where the real life characters are today. One forgotten story is that of outlaw-turned law-abiding citizen, George Christie Jr., a former Hells Angels leader. To learn more about him, have a look at our George Christie wiki.

George Christie Jr. was born as an only child in 1947 in Ventura, California to Greek immigrant parents. Since his childhood, Christie was in love with motorcycles and the idea of the outlaw culture.  Against his father’s wishes, he bought his own bike his first bike in 1966—a 1957 Panhead. Not long after, he was seen hanging around gangs such as The Question Marks and Satan Slaves, before eventually joining the notorious Hells Angels. If you ask any parent what they would want for their only child (or any child)— joining the most infamous motorcycle gang in American history is not the answer you’re going to get. But it was a dream come true for Christie, who not only joined Hells Angels, but was their leader, as well. After decades of being in the notorious biker gang along with his son, Christie left. During his time with the Hells Angels, he was their main spokesperson, and went through seven United States presidents, from Gerald Ford to Barack Obama. He was also charged and served time in prison. George Christie’s net worth is unknown at this time, but one time his bail was set at $1.0 million.

Why He Left the Hells Angels

In an interview with VICE magazine, Christie spoke openly about why he left the gang, after devoting nearly his whole life to them.

“I felt we became the people we rebelled against, and that’s exactly what I told them at the meeting when I left,” Christie told VICE magazine. “At one time, we would interact with all the clubs up and down the coast, and by 2011, we were fighting every major outlaw-bike club in the United States—plus law enforcement. That’s where some people lost perspective of what the initial intent was of the whole outlaw lifestyle. It seemed more military, like an army fighting another army.”

He Wrote a Book about Being an Angel

Christie now works as a consultant with defense attorneys and first time offenders to understand the justice system and its process. He also lends his expertise as a speaker at different events. Christie is the author of Exile on Front Street: My Life as a Hells Angel, and Beyond.

“After my departure from the club in 2011, there was a lot of misinformation going on about me. I had [formally] quit the club,” Christie told VICE magazine. “I went to the meeting, and I did it the way you’re supposed to, followed protocol, faced everybody, and I said I think we have different visions and I’m going to call it a day, and I took my patch off, folded it up, put it on the table, and everybody seemed to understand my position. And then a couple of weeks later, I think, Sonny Barger was instrumental in getting my status changed. I got a phone call that I was no longer “out in good standing”—I was “out bad” with no contact.”

Christie, 70, married his high school sweetheart, Cheryl (also age 70) and they live together in Ojai, California. They had four children until George Christie III (Georgie) died at 39 years old in 2015. Georgie Christie’s cause of death is unknown, but he was found dead in his sleep. Out of all of George Christie’s kids, Georgie was also a member of Hells Angels.