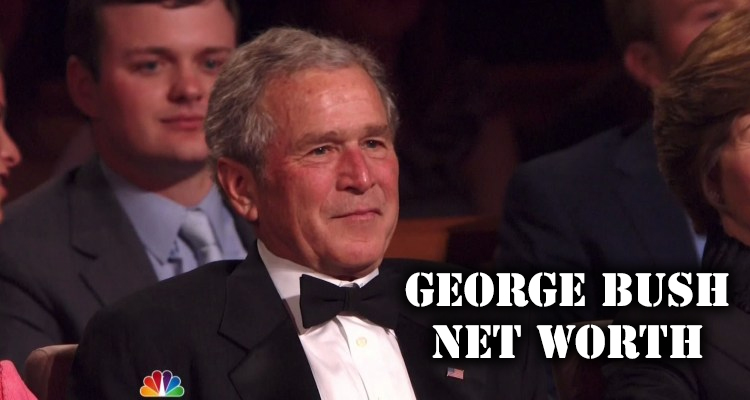 Happy birthday to George Walker Bush, the 43rd President of the United States! The son of fellow former president George H.W. Bush and the man who led the free world and saw us through the horrors of September 11, 2001, turns the big 7-0 today. He’s likely been enjoying his retirement since being succeeded by current President Barack Obama in 2009, though he still appears in the headlines to this day. Going into the date that has people searching “George Bush birthday” to see how he celebrates, how rich is George Bush? Well, apparently the George Bush net worth sits at $20.0 million, which gives him the 17th highest net worth out of all U.S. presidents (George H.W. Bush is 15th). Here’s some more info about the former U.S. president

Breakdown of the George Bush Net Worth

George Walker Bush was born July 6, 1946, in New Haven, Connecticut, as the first son to George Herbert Walker Bush, who was still decades away from his time in the Oval Office, and Barbara Bush. Geroge Jr., like siblings Jeb, Neil, Marvin, and Dorothy (sister Robin would die of leukemia at age three), would be raised in Texas. Growing up around the Bush family and their political involvement, George W. went on to attend Yale and earned a Bachelor of Arts in History; he later attended Harvard Business School and earned an M.B.A. from there, making him the only U.S. president to possess one. He also went on to serve in the Texas Air National Guard, though he was subject to several controversies during his service (see more below). He later was honorably discharged.

George W. Bush’s political life began in 1978 when he ran for the House of Representatives. He lost, but he later moved to Washington to assist with his dad’s campaign for president and traveled across the country to promote him. After George Sr. won, George Jr. returned to Texas and bought a share in the Texas Rangers, which he would later sell to begin his increase in net worth in earnest. He would go on to serve as a campaign advisor in his father’s reelection campaign.

In 1995, George W. Bush became Governor of Texas, a seat he held until 2000 when he became President. His reelection in 1998 saw him become the state’s first Governor to be elected to two consecutive four-year terms. He had high approval ratings for most of his tenure and his initiatives painted him as a future presidential candidate.

Announcing his plans to run for the big office in June 1999, George W. campaigned on the promises of tax cuts and supporting the education sector, minorities, and the armed forces. He asked Dick Cheney to be his running mate in July of 2000 and go on to win 29 states in the general election and 271 electoral votes, giving him the win over Democrat Al Gore. He would win reelection and a second term in 2004 with 31 states and 286 electoral votes; he was now campaigning largely on continuing the “War on Terror” following the September 11 attacks.

George W. Bush’s time in the Texas Air National Guard was marred by controversy stemming from questions about his service. At first, it was believed that he was receiving special treatment due to his father being a member of the House of Representatives, especially since he had attendance issues and was made a pilot despite faring poorly on the aptitude test. Documents that threw Bush’s military service into question appeared in 2004, months before the election, and were the subject of a CBS special report. However, it was later found that CBS failed to confirm that the documents were authentic before going to air.

Further controversies came during his presidency, one of which happened before he was even officially made president: the 2004 Florida election recount, in which it was unclear whether Bush or Gore had won the state and, in turn, the election. Numerous flaws were found in the process, which eventually saw Bush declared the winner of Florida by a mere 537 votes, including the calls for the state by the media and the behavior of the Florida Supreme Court. Bush’s brother Jeb was Governor of the state at the time, but had to recuse himself from the recount to avoid suggestions that he had aided his brother.

Also notable was his rationale for starting what would become the Iraq War, in which he claimed Saddam Hussein possessed weapons of mass destruction despite later evidence to the contrary. The United States’ entire involvement in the Middle East on what many saw as poor pretenses similarly received a lot of criticism over the course of Bush’s time as president.

Bush would meet future wife Laura Lane Welch, a teacher and librarian, at a barbecue in 1977. The two married after only three months together and, in 1981, had fraternal twin daughters: Barbara Pierce Bush and Jenna Welch Bush. The couple currently lives in a house in Dallas, Texas, with the property estimated to be worth up to $5.0 million. And, while we wouldn’t go so far as to say that he has a car collection, Bush has also owned numerous vehicles over the years, including a 2009 Ford F-150, a 2001 Cadillac DeVille, and a 2005 Cadillac DTS.