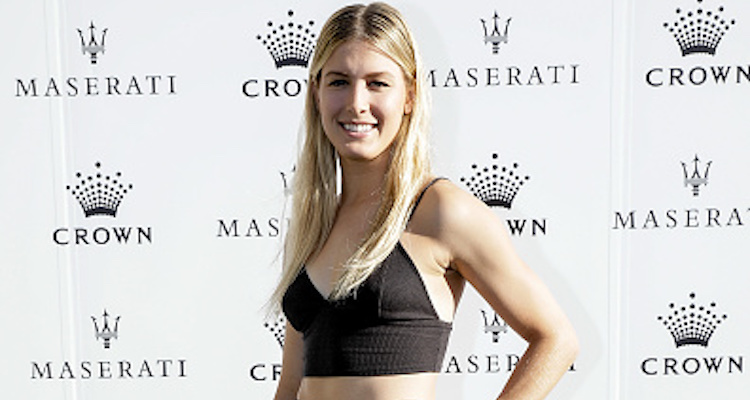 Genie Bouchard is a tennis player that many can’t seem to take their eyes off of! And we can’t blame them—look at the girl! She’s an absolute bombshell and we will be as bold as to say, she is probably the most attractive tennis player playing the game today. She made the Sports Illustrated Swimsuit issue twice—that’s proof in itself!

While we are in awe of her skill as a tennis player, we thought we’d take this post to appreciate Genie Bouchard’s form (and all aspects of it, if you know what we mean). There’s no denying she’s a true beauty and once you start lurking her ‘Gram, it’s pretty hard to stop. (Her personality seems impossibly adorable, so she’s got that working for her, too.) We’ve scoured through Genie Bouchard’s hot pics on her Instagram and, needless to say, we found a few good ones. From sexy to goofy and even a little risqué, we’ve found the hottest pics of the tennis star for you to gawk over. We’ll also provide you with some fun facts about Genie Bouchard while we’re at it!

2018’s Sports Illustrated Swimsuit issue marks the second time that Bouchard has graced its pages! Fun fact, she shared via Twitter that her dad fully approves of her latest batch of photos. Although, he does find it a little weird… #dadprobs.

A year later, we made it ? #SuperBowlDate

So, this guy right here? This is the stuff that dreams are made of. Back in February of 2017, Bouchard went on Twitter and made a bold prediction that Atlanta would win the Super Bowl. An average Joe named John Goehrke saw Bouchard’s tweet and raised her “one date” if the Pats won it! He bet Bouchard that if New England won, she’d have to go out with him.

Goehrke called it. Now, Bouchard could’ve just let it go, said she was joking or simply ignored the dude. But in this case, she was a woman of her word! She flew the University of Missouri student to New York and the two actually went on the date! (Goehrke even brought her a gift!)

While the two, as far as we know, didn’t end up becoming a couple, they did get along rather well. So this year, the NFL offered up tickets to the Super Bowl for Goehrke and Bouchard to attend together! From one simple tweet, Goehrke got two dates with this stunning lady AND he got to go to the Super Bowl. Not bad, buddy.

Merry Christmas to Us!

Even at Christmas, with little makeup, Bouchard still manages to wow us. (You’re wishing that was your t-shirt, aren’t you?)

Look at Those Muffins!

Bouchard’s had a tough season in the world of tennis, but it does look like she’s putting in the work to try and get better. Many of her Instagram pics are workout shots and videos taken while she trains.

Lovedddd this @nikecourt outfit from almost exactly a year ago ?

Intentional or not, she not only matches the court she plays in, but always looks great doing it!

She Blinded Us with Science!

Got my nerd on ??? visited the Cellular Microenvironment Design Lab in the Chemical Engineering Building at McGill! Thank you Dr. Christopher Moraes for showing me around & @liserz of course

Before Bouchard ended up in a career in tennis, she was contemplating a career in the sciences, specifically as a physician.

Looking Classy on a Night Out

Killing it on the court and off! She simply sizzles on the red carpet! (Would you look at those arms, though?)

The sweat just flying off me tho ?

This girl always gives 110% when it comes to tennis. And it shows! Sweat, girl!

Who knew Tennis could look this good…

Of all the Genie Bouchard bikini pics we’ve been drooling over on her Instagram, this one has us thinking about taking a dip in the water on that beach—we sure hope it’s cold!