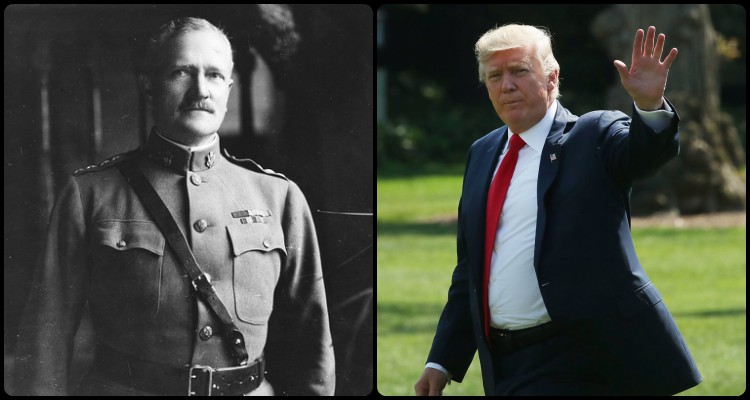 While the world sends their prayers and messages of support following the Barcelona attack on Thursday, President Trump shared a debunked General Pershing and pigs blood story. If you want to know more about Donald Trump and General Pershing, then keep reading.

In what is now being called a “terrorist attack” in Barcelona on Thursday, 13 people have died and over 100 people were injured when a white van was driven into a crowd of both locals and tourists. The driver fled on foot, and reports suggest that he is 18-year-old Moussa Oukabir. His brother, Driss, was arrested on suspicion of hiring the van, but denies the charges, saying that his documents were stolen and used to get the vehicle.

People all over the world took to social media to express their grief over the attacks. President Donald Trump also expressed his thoughts on the matter, but he apparently tweeted false facts about a General Pershing story. After seeing Trump’s tweet, people want to know what General Pershing did to terrorists, and more behind this “mythical” story. The short answer is that there is no validation to this myth. So, what exactly is the General Pershing myth? We have the details right here!

President Trump recently said that before he makes a statement, he wants to make sure he gets the facts right. However, he did not exactly follow through on that after tweeting a statement about Thursday’s Barcelona terror attack. First, he condemned the terror attack by tweeting:

“The United States condemns the terror attack in Barcelona, Spain, and will do whatever is necessary to help. Be tough & strong, we love you!”

Adding to his thoughts, Trump retold a story that he first brought up during his campaign in 2016:

“Study what General Pershing of the United States did to terrorists when caught. There was no more Radical Islamic Terror for 35 years!”

What he tweeted to his 36.1 million followers was actually a debunked rumor that Pershing shot 49 Muslims with bullets dipped in pig’s blood, releasing one to warn his people. Though it is believed to be false that General John Pershing implemented these methods, he did have a hand in stopping insurgents in the Philippine-American War. At that time, the Philippines were a U.S. colony and Pershing’s unit tackled Muslim counterinsurgencies.

The myth about Pershing involves him rounding up 50 Muslim terrorists and having 49 of them shot with bullets dipped in pig’s blood, a symbolic gesture as pork is considered forbidden (or haram) in Islam, leaving one survivor to tell his people about what happened. It was thought that, because of their faith, the use of pig’s blood would send the Muslims to hell.

However, there is no evidence to support the story. According to Brian M. Linn, a Texas A&M University professor, “It’s a made-up story. It doesn’t seem to matter how many times people say this isn’t true. No one can say where or when this occurred.”

Though Pershing’s memoir, My Life Before the World War, 1860-1917 cites an example of another commanding officer, posted in the Philippines, who buried Muslims “in the same grave as a dead pig,” there is no indication that Pershing himself conducted similar acts.

Shannon Dunn, an assistant professor of religious studies at Gonzaga University explained that although Islam prevents its followers from eating pork, “there is no penalty for coming into contact with pork given by the Quran.” She further added, “To my knowledge, Muslims, especially unknowingly, would not be banned from heaven for eating or getting hit by pork. There are some interpreters who suggest that Muslims should eat pork rather than starve, if faced with that alternative.”

In February 2016, during a Republican primaries rally, Trump first recalled the false story about General Pershing. At the time, he was advocating waterboarding as an interrogation tactic, and added that there were no terrorist-related attacks for almost 25 years. Though many have corrected President Donald Trump about his untrue story, neither him nor the White House have clarified the statement.