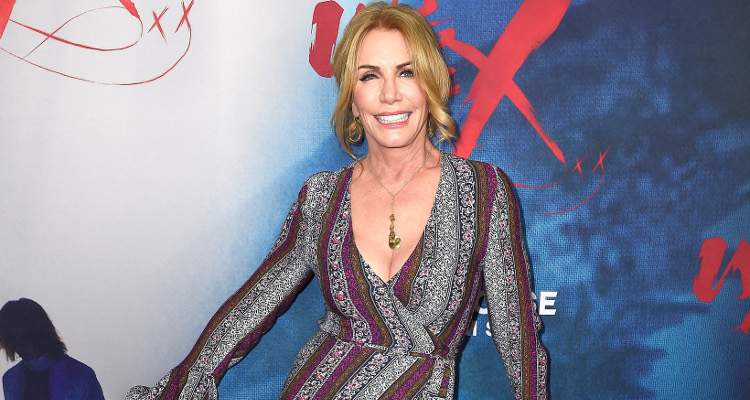 Shannon Tweed’s cancer scare put her name in headlines before. She made news recently after her friend Beth Chapman revealed that Tweed helped her overcome her cancer. If you want to know more about Gene Simmons’ wife, then keep reading.

Born on March 10, 1957, in St. John’s, Newfoundland, Canada, to Donald Keith Tweed and Louise Wall Tweed, Shannon Tweed’s age is 60. Her father owned a mink farm, so Tweed grew up on a ranch in Markland with her six siblings, including actress Tracy Tweed.

However, after a terrible car crash, Tweed’s father fell into a coma. So, the family moved to Louise Tweed’s mother’s home in Saskatoon, Saskatchewan. She pursued nursing, and her family made ends meet with welfare.

Tonight's jumpsuit! I just popped my shoulder seam.Trying to pretend it was made like this.

A post shared by ShannonLeeTweedSimmons (@shannonleetweedsimmons) on Oct 22, 2016 at 6:32pm PDT

At the age of 20, Shannon Tweed underwent plastic surgery to enhance her breasts and began participating in several beauty pageants. Tweed reportedly placed third as Miss Ottawa in the Miss Canada Pageant in 1978. Additionally, she won the Miss Canada talent competition because of her singing.

Shannon Tweed’s net worth is estimated at $25.0 million. Her career took off after Thrill of a Lifetime somehow made an arrangement for her to pose for Playboy magazine.

Tweed was Playmate of the Month for the magazine in the November 1981 issue, and in 1982, she became the Playmate of the Year. Apparently, one of Shannon Tweed’s sisters’ was featured with her in a Playboy spread.

Besides modeling, Tweed also tried her hand at acting and appeared in TV shows like 1st and Ten, Falcon Crest, and Frasier. She also appeared in a few B-list movies, as well as The Dukes of Hazzard, Married…with Children, and Days of Our Lives.

A post shared by ShannonLeeTweedSimmons (@shannonleetweedsimmons) on May 9, 2017 at 7:30am PDT

Besides acting in movies, Tweed and her family appeared on the reality TV show, Gene Simmons Family Jewels. The show started in 2006 and went on for six years.

One of the highlights of the show was when her husband proposed to her. The show covered their wedding at the Beverly Hills Hotel in Beverly Hills, California.

Additionally, Tweed’s voice and likeness are featured in the video game, Shannon Tweed’s Attack of the Groupies. She also narrates Ex-Wives of Rock.

She Is Gene Simmons’ Wife

While she was a Playboy model, Tweed moved into the Playboy mansion for 14 months as Hefner’s partner. However, the mansion was also where she met her future husband, Gene Simmons.

In an interview, Simmons explained, “I need Shannon in my life. Not just because of love and family but because she holds me accountable.”

On October 1, 2011, Simmons and Tweed walked down the aisle, after being together for 28 years. The couple got married in an outdoor evening ceremony on the crystal lawn of the Beverly Hills Hotel.

Happy anniversary to us! It's getting better all the time!

A post shared by ShannonLeeTweedSimmons (@shannonleetweedsimmons) on Oct 1, 2017 at 8:48am PDT

In fact, their wedding announcement, which was prepared by their kids, read, “After 28 years of loose strings, our parents have finally decided to tie the knot. Our mother will share our horrendous hyphenate of a last name and our father’s life…well, it doesn’t change that much.”

The note continued, “But we will be united as a family in spirit and in title forever.”

A few years ago, there were rumors that Tweed had breast cancer, after she reportedly discovered a lump in her breast. The rumor grew when both Tweed and Simmons made an appearance on the CBS talk show, The Doctors.

A post shared by ShannonLeeTweedSimmons (@shannonleetweedsimmons) on Jan 13, 2017 at 3:46pm PST

To be on the safe side, Tweed consulted a doctor, who assured her that the lump was not cancerous. However, they still removed the lump to avoid complications in the future.

Recently, Tweed’s friend, Beth Chapman, revealed that when she was diagnosed with stage 2 throat cancer, she was able to beat it with the help and support of her husband, Duane Chapman, and Shannon Tweed.