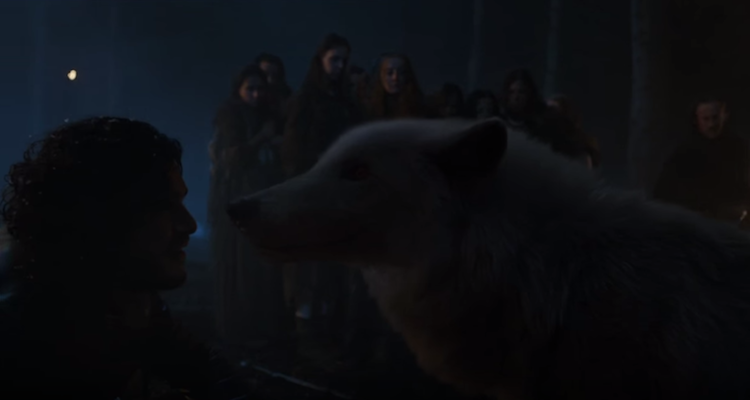 Warning: There are Game of Thrones spoilers from all seasons ahead!

On Sunday night, we were ecstatic to see Arya and Nymeria’s reunion —no matter how heart wrenching it was! We hadn’t seen them together since season 1, before Arya chased her away to escape execution for attacking Joffrey, and were overjoyed to see she’d survived the past six seasons—the Stark direwolves haven’t had the best of luck, after all. We know that Bran’s direwolf, Summer, was taken down by the White Walkers, Rickon’s wolf, Shaggydog, was beheaded by the Umbers, Robb’s wolf, Grey Wind, was beheaded and sewn onto his body by the Frey’s, and Sansa’s wolf, Lady, was put down by her father as punishment for attacking Joffrey—which leaves Nymeria and Jon Snow’s wolf, Ghost, the last surviving Stark direwolves. We now know that Nymeria is alive and well, so what happened to Ghost in Game of Thrones? Is Ghost still alive? We’ve been wondering the same thing, so naturally, we did a little digging. Keep on reading to find out where Ghost is in GoT season 7.

The last time we saw Ghost on Game of Thrones was early on in season 6 when he was by Jon lifeless body. However, as soon as his owner was resurrected, Ghost was MIA. It’s been almost an entire season since he’s gotten any screen time —he didn’t even show up during episode 9, “The Battle of the Bastards” last season. This left fans wondering: Did Ghost die? From what we’ve found, the answer is no.

Where Is Ghost in Game of Thrones Season 7?

Writer of Sunday night episode, “Stormborn,” Bryan Cogman tweeted to his followers, letting them know he tried to squeeze a scene with Ghost in, since he knows what a fan favorite he is: “FYI… We shot a Jon/Ghost scene. Didn’t make it in. I tried! Thx for watching, everybody. #Stormborn.” To say that we’re disappointed is an understatement. We thought that Jon would set out with his four-legged sidekick alongside his and Ser Davos’ journey to Dragonstone, but that obviously didn’t happen. However, Ghost’s first scene this season getting cut doesn’t explain why we haven’t seen him in almost 10 episodes—has no one else thought to include him?

The biggest tiff that fans have with Ghost’s exclusion from GoT is the failure to involve him in the Battle of the Bastards. Liam Cunningham, who plays Ser Davos on Game of Thrones, told Tech Insider that leaving the direwolf behind during the battle was a strategic move on Jon’s part: “Obviously a big battle like that is no place for a direwolf,” he said. “They’re not gonna last very long — I mean look at what happened to Wun Wun, the last of the giants.”

However, when director Miguel Sapochnik was asked about Ghost’s absence at the battle by Business Insider, he mentioned that it was more of a concern regarding the budget than anything else. “[Ghost] was in there in spades originally, but it’s also an incredibly time consuming and expensive character to bring to life,” said Sapochnik. “Ultimately we had to choose between Wun-Wun and the direwolf, so the dog bit the dust.” Okay, we admit Wun-Wun was an amazing addition, but that doesn’t mean we miss Ghost any less!

Regardless of whether he gets screen time or not, Ghost has the hearts of viewers and will be welcomed back whenever GoT scrounges up the funds to do so. To be honest, we’re just happy he hasn’t met the same fate as most of the other Stark direwolves, and has stayed out of harm’s way.