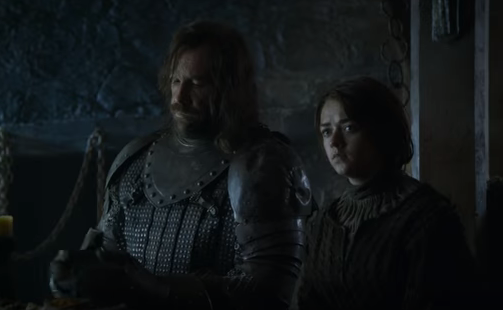 Last night, the first episode of Game of Thrones season 7 aired on HBO, and we’ve never been so happy to hear a theme song before! With goosebumps just from just the opening credits, last night’s episode was everything we were hoping for—and left us wanting even more than before. If you haven’t watched the first episode yet, then be warned that there are some Game of Thrones spoilers ahead. During the season premiere, viewers see Arya seek revenge for the Red Wedding, Cersei begins her reign as Queen rather than just Queen Mother, and then there’s Danerys’ arrival at House Targaryen’s ancestral Dragonstone seat. Though these were the main goings-on of the episode, there were some key details—as there always are—intertwined with the main storyline. We learned some vital information about Sandor Clegane, also known as the The Hound and Azor Ahai, that could allude to who will be the savior when it’s time to face the White Walkers. Is The Hound Azor Ahai? Maybe—some of those seemingly far-reaching fan theories don’t seem so far-reaching now. Read on to know more! (Warning: There are Game of Thrones season 7 spoilers beyond this point.

In Game of Thrones, Azor Ahai is known as the Lord of Light in the religion, R’hllor. Remember Melissandre, the stunning Red Priestess that was actually decrepit? The one that followed Stannis in his campaign, and sacrificed his daughter Shireen? Yeah, she’s a devotee of the Lord of Light. Now that we’ve put things into perspective—because we know how hard it can be to remember all the names and connections throughout the series—let’s get into the history a little. The Lord of Light forged a sword he called Lightbringer, which he used to defeat the ‘darkness’ of the Great Other. However, the immense power of his sword came at a price—he had to plunge it into the heard of his beloved wife, Nissa Nissa, to unleash its potential. The Azor Ahai prophecy says that he will be reborn as “The Prince That Was Promised.” The One is destined to “lead the people against a darkness with a flaming sword called Lightbringer.” More specifically, the prophecy reads:

“There will come a day after a long summer when the stars bleed and the cold breath of darkness falls heavy on the world. In this dread hour a warrior shall draw from the fire a burning sword. And that sword shall be Lightbringer, the Red Sword of Heroes, and he who clasps it shall be Azor Ahai come again, and the darkness shall flee before him.”

What does this have to do with The Hound? There have been fan theories floating around suggesting that he could be The Prince That Was Promised, and last night’s episode leads us to believe that these theories could have some merit.

The Hound questioned Beric Dondarrion about why the Lord of Light would bring him back to life so many times, to which the Thoros of Myr told him to look into the fire for the answers he sought. After searching the fire for his answers, The Hound described the ominous vision he witnessed in the flames: “Ice, a wall of ice. The Wall…It’s where the Wall meets the sea. There’s a castle there. There’s a mountain, looks like an arrowhead. The dead are marching past, thousands of them.”

Sounds familiar, right? This could be a reference to Eastwatch-by-the-Sea, the castle the Tormund agreed to guard at Jon Snow’s request, referencing to the fact that it could be the location of the next battle with the White Walkers!

Among others suspected to be Azor Ahai are Danerys Targaryen and Jon Snow. Whoever it is, we hope we find out soon because the White Walkers are bound to return with a vengeance! Tune in to HBO on July 23 at 9 p.m. to watch the second episode of season 7, “Stormborn.”