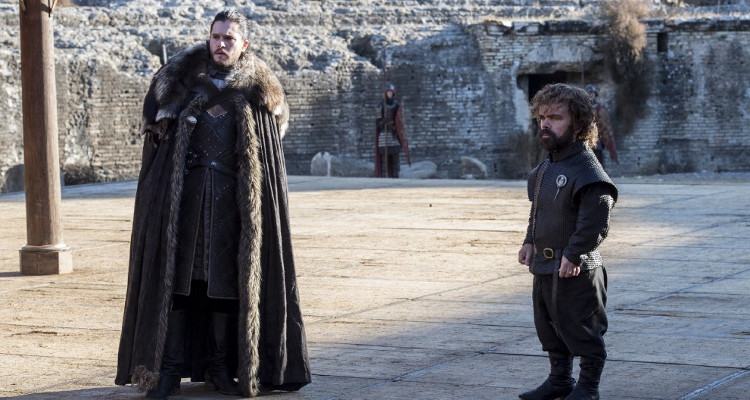 HBO just ended the best season of Game of Thrones on a high note. Spoilers and leaks did nothing to ruin the dramatic tension of Westeros during this epic season. After the season 7 finale, we are already looking forward to the next season. Want to know how long the wait for the next season is? Here’s everything you need to know about the Game of Thrones season 8 release date and more.

When Does the Next Season of GoT Start?

The Game of Thrones season 7 finale certainly did not disappoint. Not only did we see the game-changers gather in the dragon pit but also “Jaenerys” fans saw their favorite characters finally get together! And we finally know the R+L= J theory holds true! Now that changes everything! How long will it be before we see if Jon finds out about his Targaryen lineage?

Unfortunately for Throners, there’s going to be a long wait. Nikolaj Coster-Waldau, who plays Jaime Lannister, said they don’t begin filming for the next season until October. So, there’s no confirmed release date in sight. David Benioff and D.B. Weiss are going to spend the next year and a half writing and making season 8, according to Casey Bloys, HBO’s programming head.

Calculated based on previous seasons, it is speculated that season 8 may premiere as early as summer 2018, or as late as 2019. Production could take longer if the final season is CGI-intensive, and we guess it will include a large army of the dead, more dragon action, and lots of Westeros-worthy locations.

How Many Episodes Does GOT Season 8 Have?

After delivering 10-episode seasons of the pop culture phenomenon, season 7 packed all the drama in seven episodes, the shortest season yet. It may have had the best battle scenes we’ve seen and two of the longest episodes of the series so far, but the short season left fans craving more. And there were complaints from some fans about the rapid pace of the show, with characters traveling at the speed of the Lord of Light, and other time and space inconsistencies. Will season 8 take its time like the rest of the series initially did?

Prepare to be minimally disappointed. Season 8 will be the shortest season we get, with only six episodes. That’s right! Game of Thrones ends in six episodes—a tad shorter than season 7! But that’s not to say that everything will be concise. HBO said that the season 8 episodes will be feature length. That means they will be almost two hours long! Though it’ll feel like two episodes at once —which is great— it also means that filming for such long episodes will take much longer.

How GoT will end!

More Leaks in the Future?

Season 7 has had its worst battle with leaks and no Mother of Dragons to roast the evil hackers. After all the accidental and intentional leaks, season 7 still wrapped up with high ratings, which speak volumes about loyal Throners. As for those claiming to have season 8 leaks, most are either plot predictions disguised as spoilers, or completely fake stories.

As Casey Bloys said, season 8 is still in the writing process. Benioff and Weiss said that they know what happens in every scene. Which means they are going to make sure the final season turns out spectacular. Can we expect the writing duo to take this TV phenomenon further? Not really. The eighth season will be the final time these two work on GoT before they take up other projects. With GoT season 8, Benioff and Weiss will be going out with a bang (which is more than that dreadful phone call most actors get on the show.)

But fret not Throners: the game isn’t over yet. HBO is planning a number of spin-offs to continue the work of Weiss and Benioff. So far, four prequels are in the planning stage and other writers will be doing their own take on it. But it would take another year or more before any of them premiere. For now, it’s clear that we’ve got a long wait until Game of Thrones season 8 or any of its spin-offs air.