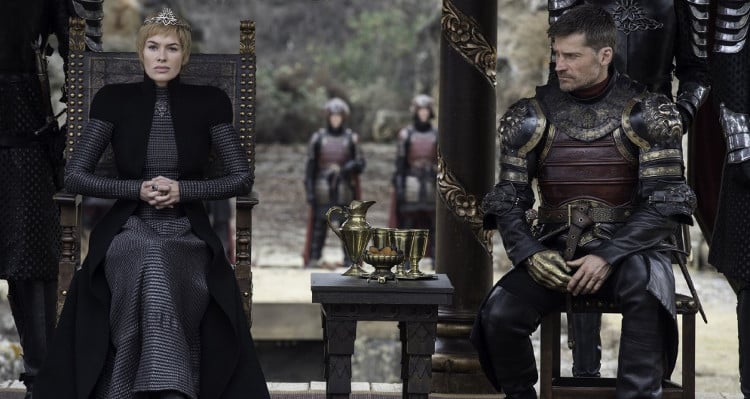 The Game of Thrones season 7 finale had a lot going on; the Westeros summit of game changers finally happened, Jon and Daenerys hooked up, the Stark siblings finally turned on Littlefinger, Jon is actually Aegon, and a zombie dragon breathed something that can melt the Wall. But let’s sift through the minor details that set the stage for next season, particularly, Jaime leaving Cersei. We never thought that would happen! What happens to Cersei’s brother/lover now? Take a look at these Game of Thrones season 8 predictions and be warned, this piece contains spoilers.

The episode opens with Daenerys’ forces outside the Red Keep and Jaime and Bronn finally seeing what they are up against. And they both know fighting the Mother of Dragons is a losing battle. At the Dragonpit, the White Walker presentation by Jon Snow takes the show. But the key is in the little details. Like the glances exchanged between Cersei and her brothers, the tenseness between Cersei and Jaime, and how nobody eats anything there because people tend to die at Lannister-organized parties.

Cersei is particularly bristled upon seeing Daenerys —probably because Maggy the Frog prophesied that a younger and beautiful queen will take everything away from Cersei. Most of Maggy’s prophecy for Cersei has come true. All that remains is a young queen and a “little brother” to complete it. Cersei’s preoccupations with Daenerys make her resilient and she’s not willing to ally with the factions fighting the army of the dead up North.

Tyrion tries to convince her in private where old family problems spill out. Cersei admits that Tyrion didn’t kill Joffrey, but he did kill their father, Tywin Lannister. With Tywin gone, the Lannisters lost the strongest figurehead they had. Tywin ruled with an iron fist and he singlehandedly made the House untouchable. With his death, weaker powers like the Martells and Tyrells let Myrcella and Tommen be taken advantage of and eventually lead to their deaths.

Tyrion sees her point but in a way, Cersei is also accusing herself of not being as strong as Tywin. And yet, she couldn’t bring herself to order The Mountain to kill Tyrion because believe it or not, she’s not the type to kill her own family. Tyrion realizes she’s pregnant and in a silent moment, the two decided the White Walkers are the bigger threat to their family. So, Cersei agrees to send her forces to the North.

Except that she played Tyrion and all of us. In a fight with Jaime, she confesses that she intends for her enemies to kill each other and the White Walkers and they’ll kill the rest. And here Jaime thought she was willing to be a better person for her family!

Since Jaime returned from captivity sans his sword hand, the gap in ethics between him and his sister has been widening. Once willing to do everything for Cersei, he begins to question his many actions. Since the great dragon battle this season, when Jaime saw what horrors a dragon and Dothraki combo can do to his innocent soldiers, he has been looking for the greater good. Perhaps he saw that protecting the Seven Kingdoms from the threat beyond the Wall was it. But he gets a rude shock when he learns what Cersei is plotting.

The thread that connected Jaime’s sensibility to his undying love is severed. He breaks it off with Cersei, much to her shock. After all, her love for her family and Jaime is the only thing keeping her going. Even her warnings of treason don’t deter him. She almost wanted The Mountain to kill him —something she couldn’t even do to Tyrion— but this is her beloved Jaime. It scares him, but he knows she won’t let her guard hurt him. In moment of poor personal, strategic, and political decision, Cersei lets Jaime go. He marches to the North solo just when winter has finally reached Kings Landing.

brienne finally slapping some sense into jaime for being such a headass WHAT A QUEEN pic.twitter.com/xSn13KrGby

Many see the moment when Jaime left Cersei as the final straw. Per Maggy’s prophecy, a “little brother” will be the cause of her death when she’s at her lowest. With all of her beloved children gone, and the only one who loved her leaving her, you could say Cersei is at her lowest point. But you never know. She is a woman hardened by loss. If Jaime or Tyrion are responsible for her death, there’s some more grief Cersei has to go through.

There’s a theory that Jaime could be Azor Ahai. It doesn’t make as much sense as with Jon Snow or Daenerys, but there are valid points. Different translations of the prophecy from Valyrian make mentions of a golden hand and guess who has one? After the dragon battle following Olenna Tyrell’s final confession of Joffrey’s death, Jaime nearly died. But he was saved by Drogon’s hellfire and drowning in the river by Bronn. Some say this is the moment he was reborn even if not as dramatic as Jon or Dany’s. But it makes him question his loyalty to Cersei. If, like the first Azor Ahai, Jaime kills his beloved (in this case Cersei), he may actually fulfill the prophecy.

But that’s a farfetched theory at this point when there are other characters that fit the criteria better. Jaime earned the moniker of “Kingslayer” for killing the Mad King, which saved the innocent citizens in Kings Landing from being blown up by Wildfire. But the title irritates him as it’s a reminder of the oath he broke and killing the man he was sworn to protect. It’s unlikely that he’d reinforce that title by killing the Queen.

For now, we do believe that season 8 will see Jaime fight the army of the dead in the North. He may have left Cersei and their unborn child (which most Throners believe is a pregnancy hoax by the scheming queen) but like Cersei, he too fights to protect his family.

It’s easier to believe that Tyrion, and not Jaime, might kill Cersei. Though there are theories that it’s not Cersei’s little brother but a little brother that could kill her. So it could be Jon, the youngest of Rhaegar Targaryen’s children, or the youngest Stark, Bran, or even Sandor Clegane, during a heated Cleganebowl with his Frankenstein brother. Anything could happen! Nevertheless, we don’t see Cersei or Jaime surviving season 8. But the show appears to be setting up Tyrion to be last standing Lannister —mostly because he has gone through a lot.

If Jaime arrives North before the impending battle with the White Walkers, he could sit down for a cup of tea with the main characters gathered in Winterfell. By that, we mean Bran. Remember when Jaime said “the things I do love” before pushing Bran off a tower and leaving him a cripple? That’s the single most worst thing Jaime has done in the series, because after Ned Stark, Jaime is the moral compass of the corrupted Seven Kingdoms. He’s left his “love” behind and now might only do what he thinks is right. Bran may not hold him to it because if it weren’t for Jaime, he wouldn’t be trudging north of the Wall and wouldn’t have become the Three-Eyed Raven.

But the Wall has crumbled and the White Walkers are moments away from Winterfell. Who’s hoping that Jaime actually makes it in the nick of time to save Bran? That would be awfully poetic! It would still be an awkward meeting (Though any conversation with Bran now is awkward). But we’d still have to wait for when Game of Thrones season 8 premieres to see what lies ahead for Jaime.