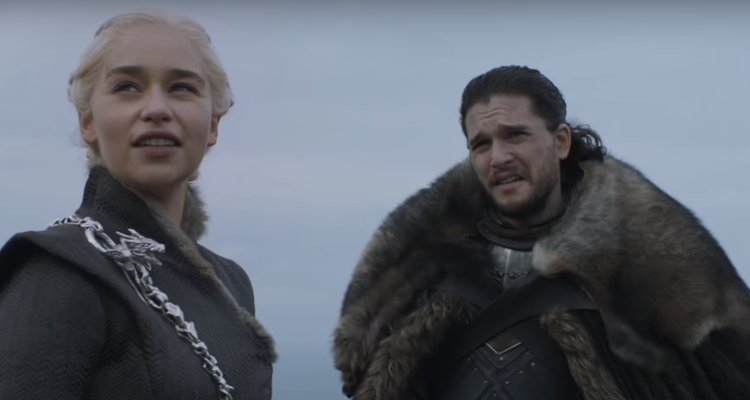 HBO typically takes extra precaution to keep details of their shows under wraps until they air —especially Game of Thrones. However, they have not been successful this season as Game of Thrones season 7, episode 6, which is set to air August 20, was leaked on August 15. After their evident connection last week, people are wondering if Jon Snow and Daenerys Targaryen are related. We have you covered right here with details about how Jon Snow is related to Daenerys Targaryen.

Even before Jon and Daenerys came face to face, fans speculated that sparks would fly between the two. At the end of season 6, when it was revealed that Jon is a Targaryen, people wanted to know if Jon Snow is related to Daenerys Targaryen. After seeing the chemistry both characters had last episode, it looked as though Daenerys is in love with Jon Snow.

Keep reading to learn more about whether or not Daenerys in love with Jon Snow, and how the two are related. Just a heads up: We have some Game of Thrones season 7, episode 6 spoilers ahead!

At the end of season 6, it was revealed that Jon Snow is not Ned Stark’s illegitimate son but instead, is the son of Lyanna Stark. This did not come as a shock to fans, who, for years, hoped that the R+L=J theory would be true. After learning about who Jon’s mother is, we also learned that Jon’s father is Rhaegar Targaryen. So, how is Jon related to Daenerys?

Daenerys is the youngest living child of Aerys II, who was the last Targaryen king of Westeros. He had two sons: Viserys and Rhaegar. Aerys was stabbed in the back and had his throat slit by a member of his Kingsguard, Jaime Lannister, later being replaced by King Robert Baratheon.

In season 6, Bran Stark saw in a vision that Jon is Rhaegar and Lyanna’s son. It was initially thought that Rhaegar held Lyanna captive in the Tower of Joy, and forced himself on her. After last week’s episode, it is very likely that Rhaegar had his marriage to Elia Martell annulled and remarried Lyanna, who loved him just as much as he loved her. During Robert’s Rebellion, Rhaegar left a pregnant Lyanna to fight for his father, but was killed by Robert Baratheon. Last season, we saw a young Ned finding his sister dying in the Tower, holding a baby in her arms. She makes Ned promise to protect the baby, Jon, as Robert would kill him if he found out before dying. As Rhaegar is Daenerys’ brother, Jon Snow is her nephew.

Also Read: “Game of Thrones” Season 7 Episode 6 Leaked by HBO Spain: The Ending Will Shock You!

Although Jon does not know his true parentage, there may be more to the story. After finding out that “Prince Ragger” annulled his marriage, Jon might be Lyanna and Rhaegar’s legitimate son, making him the rightful heir to the throne.

With Daenerys fighting to claim the Iron Throne for herself, anything can happen if she finds out that Jon Snow is a Targaryen. Many fans thought that a romance might blossom between the two and do not know if ego or blood will get in the way. At this moment, anything can happen! Until Bran reveals the truth about Jon’s identity, we will not know how it will affect the game.