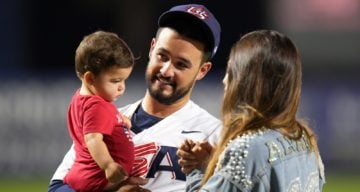 MLB pro Eddy Alvarez is back home! Team USA’s co-flag bearer added a silver medal the U.S. baseball team won at the Tokyo Olympics to his silver from short-track speed skating at the 2014 Winter Olympics. After 20 days in Japan, Alvarez reunited with his wife and baby. Alvarez’s girlfriend-turned-wife, Gaby Pearson, has been cheering on her beau—even while she was pregnant and the pandemic wouldn’t allow her to travel with him. Their touching reunion on Today has many asking who Eddy Alvarez’s wife is. So we reveal more details on their relationship in this Gaby Pearson wiki.

Gabrielle Pearson was born on December 13, 1989, to Francoise Pearson and Cecilia Cordova. She grew up in Miami, Florida.

Gaby Pearson’s Instagram bio reveals she is of Cuban and Canadian descent. Her father Francoise is from Quebec and is a medical professional based in Miami. Her mother Cordova hails from Peru.

Gaby Pearson graduated from La Salle High School in 2007 and attended Miami Dade College. She is a licensed realtor who has built a successful career in the field.

Pearson has been a top real estate agent at Redfin in Miami since 2015. She occasionally showcases properties and her successful sales on Instagram.

Eddy Alvarez is the son of Cuban immigrants who settled in Miami. Pearson and her family lived down the street from him.

They grew up in close proximity and attended the same elementary and middle schools. Pearson told The Athletic that they weren’t close until a few years ago.

They connected and began dating around 2017. Although there are no reports of their wedding, Gaby goes by Gaby Alvarez on social media, and some reports address her as Eddy Alvarez’s wife.

The Olympian and his longtime girlfriend welcomed their first child together, Jett Alvarez, on August 21, 2020. Little Jett has his own Instagram page managed by his parents.