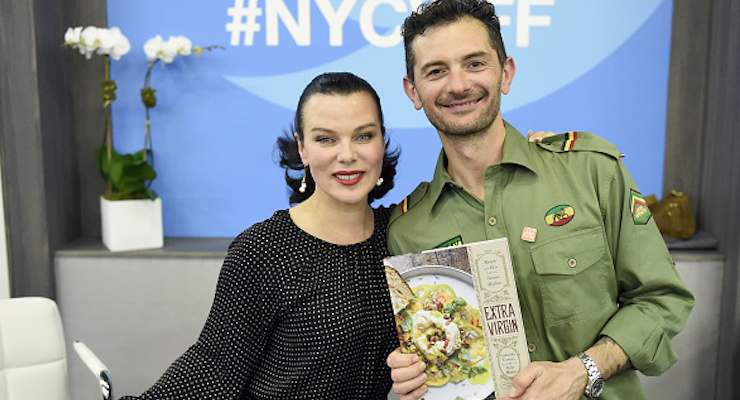 You may recognize Debi Mazar from any number of her roles on popular TV shows and movies, but did you know that her partner is a celebrity chef? Debi Mazar’s husband, Gabriele Corcos, is an Italian born and raised chef, the creator and host of his own show on the Cooking Channel, author of a New York Times best-seller, as well as the owner of a Tuscan restaurant in Brooklyn. Debi Mazar and Gabriele Corcos started a web series back in 2006 when YouTube was relatively new, that expanded into a full fledged televised cooking show in 2010. To learn more about who Debi Mazar is married to, keep on reading for Gabriele Corcos’ wiki.

Gabriele Corcos was born in Fiesole, Italy, and raised in Tuscany. After graduating from high school, he decided to enlist in the army and study medicine at the military academy. However, he soon realized that music was his true passion, and he left the army to travel to Brazil, Cuba, and Morocco to study drums and perform with locals. In 2001, Corcos met his now-wife Debi Mazar, and moved to Los Angeles shortly afterwards to be with her. The pair tied the knot in March 2002, and have been together ever since.

As an actress, Mazar often worked long hours, which left Corcos with some leisure time on his hands. He began writing about the impression American food left on him—coming form a very traditional Italian background, it was a bit of a culture shock for him. Mazar and Corcos would often cook together, and began a web series and blog called  Under the Tuscan Gun where they documented their dishes. Over the years, they amassed a loyal following, and were offered to be the hosts of their own show, Extra Virgin, on the Cooking Channel in May 2010. In 2014, Gabriele Corcos, age 44, released a cookbook called Extra Virgin: Recipes & Love from Our Tuscan Kitchen, which earned the #1 spot on Amazon’s Italian Cooking rankings for six months straight, and also made its way onto the New York Times Best-Sellers list.

A year later, the couple opened The Tuscan Guns Officine Alimentari in Brooklyn, New York. Their restaurant features authentic Italian cuisine, as well as a few American dishes with a unique Tuscan twist. Corcos spoke to People about the opening of his restaurant: “We really want to become part of people’s lives, not a destination where people come once every other month,” Corcos said. “The idea is to have an open kitchen that is pumping out good food every day, but we also have a display fridge with ready-to-go pasta sauces, soups and salads.” Describing the menu as “pleasant” and “simple,” he told People that “Everything will be done the way I learned growing up. Good portions, but never too much of it.” Corcos added that he hopes the popular Italian dish, porchetta served on herb focaccia with roasted peppers and arugula, will become “the driving force” of his new restaurant. “The smell is down the block when we’re roasting the pork,” he told People, “Everybody’s like, ‘Oh gosh, when are you going to open?’”

Taking into account all of his business ventures, both independent and with his wife, Gabriele Corcos’ net worth has not been calculated, but Mazar‘s net worth is an estimated $7.5 million. In addition to the immense success he’s achieved in his career, Corcos also has a beautiful family. Gabriele Corocs’ kids, Giulia Isabel Corcos and Eveline Maria Corcos, both live with him and his loving wife.