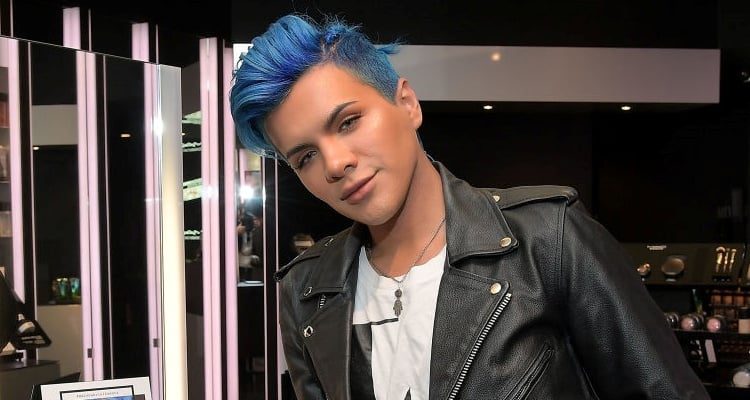 Gabriel Zamora with his trademark blue hair is a relatively known name in the YouTube beauty landscape. But he’s better known for courting controversy than eyebrows on fleek. Last year, he and Jeffree Star were among the “BeauTubers” that stirred what was once the biggest scandal in the beauty community. Now there’s even bigger drama on the platform surrounding Tati and James Charles. Zamora’s name has popped up in the controversy, and he’s got a lot to say about it. You’re probably super-curious about this third name in the war of words. Here’s a primer on him in Gabriel Zamora’s wiki, including what he said about the Tati and James drama.

Who Is Gabriel Zamora?

Gabriel Zamora’s Family Is from Mexico

Gabriel Zamora was born on March 10, 1993 in Los Angeles, California. His parents originally hailed from Mexico before they arrived in the U.S.

They initially settled in L.A., where Zamora was born, and relocated to Houston, Texas, where he was raised. He’s one of four children in the Zamora household who were raised to be proud of their Mexican roots.

After graduating from high school, Zamora went to San Jacinto College to study marketing. He graduated with an associate of arts degree in business, management, marketing, and related support, and began working in a marketing job in Houston. But he was quickly getting tired of the humdrum life.

“I knew I wanted to work in marketing, [but] I wanted a change,” said Zamora. “I didn’t feel like I was doing anything [in Houston]. So I decided to leave the job that I had and went to L.A. and got a marketing job out here.”

After returning to L.A., Zamora set about a career in the beauty industry.

Zamora is openly gay and said his mother was his biggest supporter when he came out to his parents. His dad, however, had a little adjusting to do.

Zamora has prior acting experience, which led to him finding his true calling in makeup as a teenager. Back when he was a high school student, he felt his eyes appeared too small on-screen. So he looked up ways to make his eyes look bigger online.

After getting exposed to the world of makeup techniques and tricks on YouTube, he started experimenting with makeup. His initial foray into beauty hacks involved products and techniques to make his eyes seem bigger.

Before he was an influencer, a young Gabriel used to work in stores like Forever 21, Rue21, and Zumiez in Texas.

Though he had tons of friends who were influencers, Zamora was initially reluctant to jump on the online beauty guru bandwagon because he was afraid of criticism. But with the encouragement of his family and his YouTuber idol, Patrick Starrr, he shared his first YouTube makeup video in 2014.

He stood out among YouTube’s beauty boys by making his videos in Spanish and celebrating his heritage.

His subscribers grew steadily until he had over 800K subscribers, though that number has changed as of late. His recent spate of controversies has resulted in a steep decline in his subscribers.

Zamora Collaborated with Ipsy and MAC

Shahs of Sunset star Lilly Ghalichi encouraged Zamora to move back to L.A. and hired him as the social media coordinator for her Lilly’s Lashes. That marked the start of Zamora’s brand-building.

In 2017, MAC Cosmetics collaborated with 10 beauty influencers from around the world to create their own lipstick for a limited edition collection. Zamora was the only male influencer among the global makeup gurus who each had a MAC Satin lipstick they worked on that was also named after them. Zamora’s MAC lipstick was a warm brown shade with a satin finish.

In his early influencer career, Zamora was part of a community of online beauty powerhouses that included Jeffree Star, Patrick Starrr, and Manny MUA. They frequently collaborated to produce content and featured in each other’s campaigns.

But things took an ugly turn in August 2018, when a scandal rocked the beauty influencer industry and started a discussion on authenticity in the online beauty guru platforms. It started when Star had public falling-outs with coterie of fellow makeup mavens in 2017.

Eventually, Zamora, Laura Lee, Manny MUA, and Nikita Dragun formed their own clique and collaborated with each other. Then came Shane Dawson’s highly viewed YouTube documentary on Star, where the makeup mogul referred to the quartet as “ex-friends.”

That led to Zamora tweeting a picture of himself and the other gurus raising the middle finger with the caption, “B***h is bitter because without him we’re doing better.” It didn’t take long for fans to figure out the four influencers were taking a dig at Star.

Things got heated with Zamora’s follow-up tweet, where he stated, “Imagine stanning a racist? I could never,” further adding, “Honey, every time I was around him he would constantly say racist things about black people.”

For the uninitiated, Star began his career on MySpace where he faced heat for derogatory remarks about blacks and Mexicans. He later apologized about his past in a 2017 video and the world had seemingly moved on. Dawson, who also apologized for past racist behavior in his videos, discusses their respective racism controversies in the documentary.

When Zamora brought it up, Star’s fans didn’t take to it very kindly. What ensued was some digging into the Internet graveyard to uncover racist comments by the quartet.

In an old tweet from 2012 that was uncovered, Zamora dropped the N-word. Zamora and his cohorts then scrambled to post tearful apology videos on their channels for damage control.

In his apology video, a tearful Zamora sans makeup said he cut ties with Manny and Lee in light of the controversy. Out of the four videos, Zamora’s, with over 4.8 million views, was the most viewed. His apology was considered most genuine as opposed to Lee’s, which was slammed by Star’s fans as insincere.

I’m reposting it because the responses got dark and ignorant. I’m taking a break from twitter. I now remember why I didn’t like it. People want you to be honest but don’t always wanna hear the truth ❤️ pic.twitter.com/y5rb3o6tXG

Zamora gained over 200K subscribers after that video and his was the only apology Star accepted. Zamora was part of Star’s Magic Star Concealer campaign in April, after which Gabriel denounced Manny.

But his subscribership took a hit with the recent Tati-James Charles controversy.

ICYMI, back in April, Tati shared on Instagram that she felt “betrayed” and “lost” that her protege James Charles had endorsed Sugar Bear Hair, a rival to her Halo Beauty company. Charles apologized to Tati and her fans in another Instagram video, but the matter didn’t end there, courtesy of Gabriel Zamora.

Tati and James were seemingly silent after their respective posts. But Zamora would go on to call out Tati in a May 4 video titled “Makeup and Opinions.”

In the video, he called Tati “fraudulent” and said he doesn’t think James did anything wrong. He claimed that Tati was blowing things out of proportion to promote her brand.

Unlike his Jeffree Star apology video, though, Zamora’s latest video wasn’t well-received by Tati stans. They were particularly incensed that he inserted himself into a discussion that had nothing to do with him.

But according to Tati, Zamora very much had a part in this whole debacle. In her video titled “Bye Sister” on May 10, Tati not only talks about James’ betrayal, but also mentions Zamora.

Tati also referenced James’ alleged propensity to pursue and manipulate straight men into thinking they are gay. She mentions a particular incident from her birthday party in February where both James and Gabriel were present.

According to Tati, James behaved inappropriately with a heterosexual waiter (the waiter, Sam Cooke, claimed what Tati said is true in a now-deleted video of his own) and that Zamora was “complicit” in what happened. She also said that she barely knows Zamora and has interacted with him a handful of times. But she slammed Zamora for remaining silent on Charles’ alleged sexual predation.

Following the video, Charles has seen a massive subscriber exodus to Tati’s channel. He went on to apologize to Tati on his channel, which has lost almost three million subscribers.

Tati and James didn’t speak out after that. But Zamora, who’s clearly Team James, once again dove headfirst into the drama in a Snapchat video.

Playing Tati’s video and PewDiePie’s breakdown of the events in the background, Zamora tries to explain his version of the events. However, the Internet’s response to the video was unfavorable. While many believe he’s only confirming what Tati said, others find he’s making things worse for James and himself on a public platform instead of being there for his friend.

Some even think Zamora embarrassed himself when he shared the Pew News video on the feud on Twitter.

PewDiePie (aka Felix Kjellberg) admits in the video that he hasn’t thoroughly researched the Tati-James debacle. However, he asserts that both sides are in the wrong and they should have resolved this situation privately instead of on a public platform and humiliating several people.

But after Zamora shared PewDiePie’s video, adding in his somewhat confusing defense of James and himself on Snapchat, Tati stans believed that Zamora didn’t understand Tati or PewDiePie’s videos at all and selectively picked statements out of context to slam Tati.

Although Zamora has also seen a fall in his subscribers since the controversy,  he and Nikita Dragun, nonetheless, are trying to defend Charles amid the storm that has shaken the beauty influencer community.