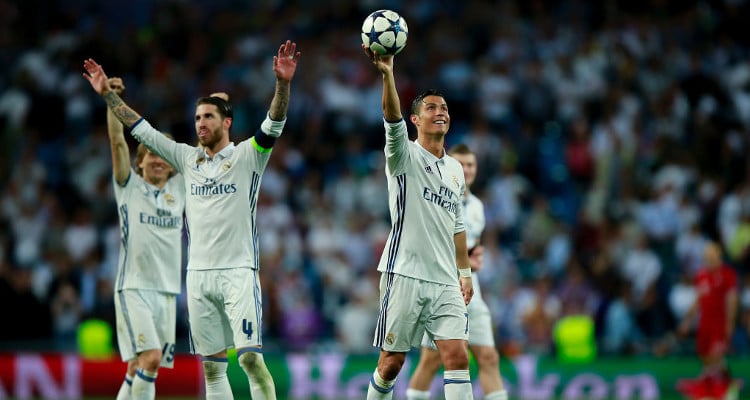 Tuesday’s match between Real Madrid and Bayern Munich was a wild one! To celebrate Real Madrid’s win, we have put together a list of five funny memes. Take a look at them right here.

Real Madrid has advanced to their seventh straight Champions League semifinals, after beating Bayern Munich in an exciting match on Tuesday (April 18). Of course, the game was not without controversy as Cristiano Ronaldo’s hat trick pushed Real Madrid to beat Bayern Munich.

Bayern Munich is obviously not happy about losing the game. The team’s manager, Carlo Ancelotti said after the game, “We’re not happy. In the quarter-final I think you need a referee who is, I don’t know, better. I don’t know if we would have qualified but it’s important not to make mistakes.”

The result of the match certainly did not sit well with Bayern, as Real Madrid’s second and third goals were said to be offside. Robert Lewandowski was particularly unhappy with the decision. He said, “In the game today I think we could have won and played the next round but the referee made a lot of errors … I think it was impossible to play Real Madrid with 10 men. It was not a red card, and for their goals it was offside for one, maybe two. Also, for my situation as well, when I was one-on-one, I was not offside either.”

Ancelotti suggested that Zinedine Zidane agreed that his team was harshly treated. Zidane added, “We suffered. We played against the best team [we’ve faced] by far, we had many chances in the first half but then we lacked tranquillity … The ref? I talked to Ancelotti and that’s it, I never go into referees. Anything can happen. We talked about other things.”

Now that the match is over and supporters of Real Madrid are celebrating their team’s win, the best way to show support is through funny memes! People all over the Internet have come up with funny Real Madrid vs. Bayern memes. Take a look at our list of five hilarious memes to celebrate Real Madrid’s win.

How I see Ronaldo when he scores a deserved hat trick versus how I see him when he scores one legit goal and two offside goals pic.twitter.com/Zdvfah3bD2

United Airlines have submitted a £40m bid for Arturo Vidal after being impressed with his ability to get sent off for no reason tonight. pic.twitter.com/JxZaYAFrDr