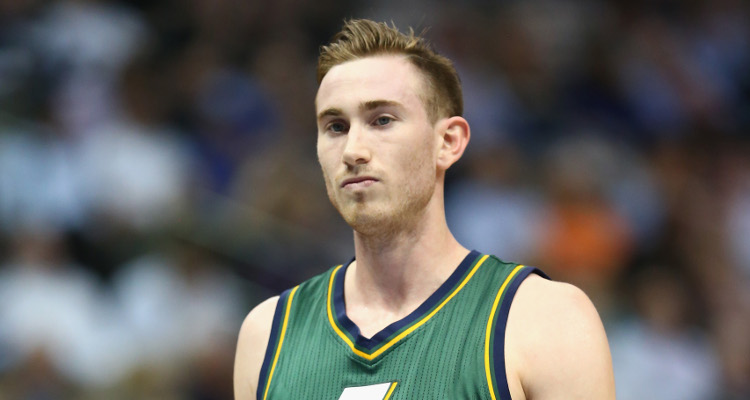 Utah Jazz player, Gordon Hayward is currently in the limelight. The 27-year-old basketball star was out because of food poisoning, but came back with a bang for Tuesday’s game against the Los Angeles Clippers. Despite the Jazz’s win, the Internet won’t let the player forget his time on the sidelines. Check out the five funniest Gordon Hayward memes right here!

Utah Jazz player Gordon Hayward left Sunday’s (April 23) game after the second quarter. It was reported that the 27-year-old had food poisoning and was too ill to even take part in the pre-game warmups! Despite missing a player, the team managed a 105-98 victory.

It was reported that Gordon’s wife, Robyn also felt sick after the two bought a “sandwich from a place.” However, the Jazz star recovered and played in Tuesday’s (April 25) game against the Los Angeles Clippers.

The Utah Jazz beat the Los Angeles Clippers in a score of 96-92 and took a 3-2 lead in their first-round of the playoff series. After their win, Gordon said, “I haven’t been that sick in years, maybe ever, went back, slept it off, and the next morning felt tremendously better. I’m back to normal.”

“It was good I got some open looks early,” said Gordon, who missed most Game 4. “I was definitely tired out there. There was points in time where I didn’t have legs. I’m pretty tired and thankful we have a couple days off.”

One of the game’s best plays came from Joe Johnson, who had two great shots in the fourth quarter saying, “We are kind of growing up in the moment. These guys have never been in this situation. We have to go home with a business mindset and not be overconfident but confident enough. This has to be our Game 7 in Game 6.”

Although Gordon is feeling much better, the Internet won’t let him live his food poisoning down! People all over the Internet have come up with funny NBA memes targeted at Gordon Hayward in the most hilarious of ways. We have the five best right here!

Now we know who made the sandwich!

Actual footage from "the place" where Gordon Hayward ate his sandwich over the weekend #takenote pic.twitter.com/dxJkPpS67Z

Signs Gordon Hayward could probably use.

Maybe it was just gas?

He grew up nicely!

When you know you made Hayward's sandwich and you see he missed the game due to food poisoning #takenote pic.twitter.com/Gp7ec1b7nd