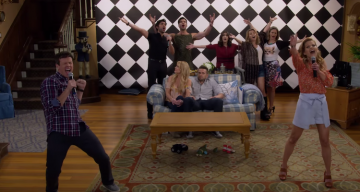 The third season of Fuller House is available to stream on Friday, September 22 on Netflix. And just in case you forgot or didn’t know, this season will be spilt into two parts: Part 1 drops on Friday and Part 2 is slated for a later date this year.

Before we get into season 4, we need to talk about season 3 and what’s coming up for the Tanner household. This season is expected to be messy and it’s mostly thanks to the love triangle that D.J. has herself mixed up in.

“D.J.’s love life is going to have lots of turmoil in it,” creator Jeff Franklin revealed to Entertainment Weekly. “She and Matt are still dating, but D.J. still has some feelings for Steve that are complicating her love life, and Steve also has some feelings for D.J., even as his relationship with C.J. moves forward.”

D.J. is officially in a relationship with Matt but has unresolved feelings for Steve, and also happens to be a bridesmaid in his wedding! This means that D.J. doesn’t have a lot of time if she wants to choose Steve over Matt. While the triangle isn’t ending anytime soon, Candace Cameron Bure wouldn’t mind if the showrunners would let her character make a decision sooner than later.

As for the second Tanner, Stephanie, she will be focusing on trying to have a baby and most of her storyline was shaped by Jodie Sweeten’s broken leg!

“We had to re-write half the season to accommodate her [broken leg],” Franklin told TV Line. “We were able to work around it [in the premiere], but for the second episode, we had to write it in.”

And as for Kimmy Gibbler (the honorary Tanner sister played by Andrea Barber) she’s afraid of losing her daughter Ramona, who’s growing up and is more into her high school life than hanging with her mom. Look out for Kimmy to bring in a lot of her usual awkward moments.

“Kimmy’s biggest struggle this season is realizing that her daughter Ramona is growing up, starting high school, and doesn’t really want to hang out with Mom all the time,” Barber said. “So she goes to great lengths to fit in with Ramona and the teenage crowd, which creates some hilarious and embarrassing situations.”

While the body of season 3 is barely cold, fans are more than ready to move onto season 4 of their favorite Netflix family. There’s no news of a release date for the fourth season and fans still have to wait for the remaining nine episodes to be added on Netflix later this year, most likely by Christmas.

One thing we do know is that the third Tanner sister, Michelle, won’t be making an appearance any time soon. Why? The Olsen twins don’t want to return to their humble roots.

“I’ve stopped asking, really I kind of gave up,” Franklin told UsWeekly. “But when somebody rings a doorbell, the girls yell, ‘It’s always open!’ on the show so that’s kind of how we feel about the Olsen twins. The door is open.”

“But I think we’ve gotten enough no’s,” he continued. “We’re kind of done asking. But who knows? You never know in life. Who thought this whole thing would happen?”

Fuller House season 3 is on Netflix on September 22.