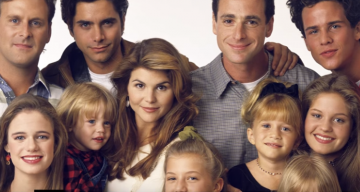 Where are they now? We’re talking about the Full House cast that became a part of American TV lore in the late ‘80s and early ‘90s. They are very much still here and thanks to Netflix, they came together again in the series reboot, Fuller House. (Premiered on February 26, 2016). With classic shows and movies often getting a reboot, many are wondering where the cast of their former favorite shows are now. We’ve got the scoop on the gang from Full House, and where they are today!

Cast of Full House: Then and Now

Then: The dapper star from General Hospital got his big break as Jesse Katsopolis, the uncle to the Tanner girls and brother-in-law to Danny Tanner. His cool guy swag was a hit with the TV audiences.

Now: After graduating from his role as Uncle Jesse, Stamos went on to appear in ER, Necessary Roughness, and They Came Together. But by far, his most visible role to date is his role as a spokesman for Danone’s Oikos yogurt.

Then: Saget led the beloved show as local news broadcaster, Danny Tanner. He was known (on the show) as the single father of three daughters, after his wife Pam died in a car accident.

Now: One of the few stars who did not appear in season 1 of the sequel, Fuller House, Saget continued his acting career with a famed voice role in How I Met Your Mother. He had a regular role in Raising Dad, and cameo appearances in Entourage. He was also the host of America’s Funniest Home Videos for nearly a decade.

So loved shooting my new TV special last night in Brooklyn with the best audiences @MusicHallOfWB ~ Excited for you all to see my new stuff. Thanks @ComedyDynamics (Photographer: @BFreedInNYC)

Then: As Stephanie from Full House, Sweetin charmed audiences with her role as the snarky daughter who loved to kick it with Mr. Bear. By the end of the show, she grows into a certified teenager, complete with crushes on boys and drama with friends.

Now: After Full house, Sweetin’s personal life made more news than her career. Three failed marriages behind her, she’s now planning on a fourth. She still appears in small cameo roles in network shows. A known alcoholic, she penned a memoir, unSweetined, that dwells on her struggle with sobriety.

Make sure to tune in today at 1pm here on the west coast to @thetalkcbs !! I'm cohosting the show along with @sherylunderwood @thesaragilbert @aishatyler and @carnie68 !! And I have BIG Fuller House Season 3 news!! #everybodytalks #thetalk

Then: Coulier eased his way onto Full House as “Uncle” Joey Gladstone, Danny’s best friend from childhood and easily the fan-favorite on the show. His spot-on impressions and sense of humor helps him win over the Tanner children, and pretty much everyone else watching!

Now: Like Saget, Coulier started hosting shows after the final episode of Full House. He was the lead host of America’s Most Talented Kid in 2003. He also had a few reality TV stints, with appearances on The Surreal Life and Skating With Celebrities.

Then: As Rebecca Donaldson, Danny’s co-host on Wake Up, San Francisco, Loughlin gets to know the Tanner family throughout the seasons on the show. She soon becomes a maternal figure and later becomes a part of the family, after marrying Uncle Jesse.

Now: A devoted mother of two, Loughlin has kept up an active career largely concentrating on television. Her small screen work includes regular roles in Hudson Street, Summerland, 90210, and When Calls the Heart.

Look what just came in the mail! Thank you so much @jessseinfeld I can't wait to try all the fun recipes in this book! First up FLUFFY BUTTERMILK PANCAKES ? #foodswings

Then: As the eldest daughter, Donna Jo “D.J.” Tanner, Candace Cameron Bure grew up over the course of the show, graduating from high school, falling in love for the first time, and planning for college.

Now: After bidding adieu to Full House, the beautiful star met hockey player Valeri Bure, and married him in 1996. Marriage did not hamper her acting career and she starred in Make It or Break It, and made headlines with Dancing With the Stars. But she’s not just a pretty face; the girl known as D.J. Tanner released two books, suggesting a career in writing career could be in her favor!

Then: As D.J.’s bestie, Kimmy Gibbler, Barber had an enviable role in Full House. The awkward, outspoken pal of DJ almost always invariably landed up at the Tanner house, even though she was not always welcome. People couldn’t get enough of Kimmy Gibbler, and the show definitely wouldn’t have been the same without her.

Now: After Full House, Barber continued her education and graduated from California’s Whittier College. She followed the path of learning and went on to pursue a Master’s degree. Almost 20 years after the final episode of Full House, Barber has stepped into her loveable character’s shoes again for her returning role in Fuller House.

It’s been more than 20 years since we last saw them on Full House, so the simple thing is to find out their ages when they were on the show, and then add 20. But since that can seem like a lot of work, we’ve done the math for you! Candice Cameron-Bure is 41, Jodie Sweetin is 35, John Stamos is 53, Lori Loughlin is 52, Bob Saget is 61, Andreas barber is 40, and Dave Coulie is 57. Hard to believe it’s been 20 years, huh?