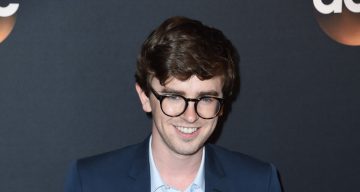 TV has been taken by storm by yet another medical drama, to join Grey’s Anatomy and House in the big leagues. After a long drought of a good new medical, we finally have The Good Doctor. With the former Bates Motel star playing the genius autistic doctor so convincingly, fans are wondering if Freddie Highmore is autistic. Read on for all the details.

Freddie Highmore’s representation of the autistic Dr. Shaun Murphy is so authentic that it can sometimes confuse fans of The Good Doctor. On the show, he plays a resident surgeon at a reputable San Jose hospital. Here are all the details about the currently most-watched TV show in America.

What is the Plot of The Good Doctor?

The Good Doctor is  on a medical drama from South Korea of the same name, that revolves around a resident doctor. In the U.S. version of the show, that doctor, Shaun Murphy, has autism and savant syndrome. The show grossed a whopping 16.1 million viewers just last week, proving that this medical drama is here to stay!

Those diagnosed with s show almost prodigious capabilities, including encyclopedic memory, that are otherwise not seen in human beings, and falls in the autism spectrum.

Dr. Shaun Murphy, in this case, is an autistic savant, with a huge knowledge bank, and a passion to become a successful surgeon. The character was developed by House’s David Shore, who wanted audiences to love the doctor not just because of his disabilities, but because of his willingness to overcome the challenges that they bring.

Shaun, as a character, is highly intelligent, rarely makes eye-contact, is great at what he does, and was hired after the hospital president persisted. In the show’s premiere, Shaun is seen as a medical hero who saved a little boy’s life after noticing something the attending physicians did not.

Shore made it clear that he did not want to make Shaun look emotionless or mindless. People’s perception of autistism is often incorrect, and Shore was determined to change that mindset.

On the show, the St. Bonaventure is run by Dr. Aaron Glassman, who was well-known to Shaun since his teens. The hospital’s president secures Shaun a residency, but his attending surgeon, Neil Melendez, is not too pleased with having Shaun on his team.

Shaun Murphy’s disorder allows him to visualize a lot differently than others. The way he sees thing, and is able to diagnose a patient, is almost like working out a math problem in his mind. He is a witty guy, with occasional bursts of humor that will crack you as we learn more to understand his character.

Freddie Highmore revealed how he searched for a realistic approach to understanding Shaun. “I think it was important, in building out Sean as a character, to focus on his very real struggle in having autism and being thrown into this new environment and bringing out his hopeful side—what makes him laugh, tick, etc.” But the buck does not stop here, and Highmore looked for more research on autism, to make his portrayal more authentic. He knew somebody who had autism and wanted to do justice to his depiction.

Shaun Murphy has had a difficult childhood with an abusive father and bullies. He was protected by his brother but, as a teenager, witnessed his brother die in a freak accident. As the show builds, we can see a different perspective of how Shaun thinks or behaves in a particular situation and because of Highmore’s dedication and versatile acting skills, there is a lot more than can come out of the story. So, if you were asking yourself if Freddie Highmore has autism, it only means that he played the character so well!

Watch The Good Doctor Monday nights at 10:00 p.m EST only on ABC.