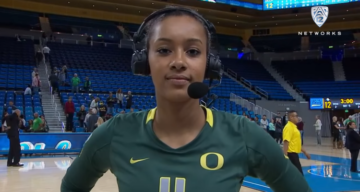 Green Bay Packers offensive lineman David Bakhtiari impressively out-chugged his quarterback, Aaron Rodgers, at the Toronto Raptors-Milwaukee Bucks Eastern Conference Playoffs on May 23. While Bakhtiari’s beer-chugging capacity might have made bigger headlines in the U.S. than the Raptors winning, it’s the pretty lady seated beside Bakhtiari who really caught everyone’s attention. That woman is Frankie Shebby, the woman who gets to call herself David Bakhtiari’s girlfriend. We’ve got Frankie Shebby’s wiki for you, so you can get all the deets on the young stunner.

Frankie Shebby Is from Washington

Frances “Frankie” Shebby was born on February 8, 1996 to Jo Ann Shebby in Bellevue, Washington. Her father’s name is not publicly available. According to some who have been following her career before she dated Bakhtiari, Frankie Shebby is of biracial heritage.

happy mother’s day to the sweetest/most beautiful woman this world has ever known♥️ I love you to the moon & back mommy.

Frankie Shebby later moved to La Mirada, California, going on to graduate from Mater Dei High School in 2014. She attended college in Oregon and then in Colorado. Shebby’s currently in Wisconsin where her beau is based.

Shebby Transferred to University of Colorado

Shebby, a stellar volleyball player, went to the University of Oregon where she played volleyball for the Oregon Ducks team.

However, Shebby reportedly violated her academic contract when she didn’t maintain her grades. She was also late to a tutoring session, which was considered a violation of the rules. The young woman was given a full release to transfer and went to the University of Colorado (CU), where she majored in psychology.

Shebby played volleyball at Colorado, too, even dominating in a match against her former team. But she decided to forgo playing volleyball in her fifth year owing to injuries. Shebby is set to graduate from CU in May 2019.

Sooo a few people have asked why I’m no longer on the colorado roster….A couple weeks ago I decided not to play my fifth year. It was a very hard decision that I had been contemplating for quite some time. I have two bulging discs in my lower back and I decided to prioritize my heath over pushing through another season. I know many athletes who have pushed through back injuries and continue to be hindered by those injuries well after they’ve finished playing. Most will be effected by those injuries for the rest of their lives even after surgery. I am so thankful for the staff at Colorado. They truly care about their players and treat everyone like family. I’m also eternally grateful for this sport and the great memories and lifelong friends i’ve made over the past 10 years. Volleyball has allowed me to travel the world and meet so many people from all types of backgrounds. It has taught me perseverance and the dedication it takes to succeed. It’s been real volleyball✌🏽♥️

Shebby and Bakhtiari Have Been Dating since 2017

California native David Bakhtiari is also an alum of the University of Colorado. But the two were not students at the same time.

Bakhtiari had opted to forgo his senior year and declared for the 2013 NFL Draft, when he was selected by the Green Bay Packers.

It’s not clear how the offensive lineman met Shebby, but it appears he may have a “type.” Before Shebby, he was in a relationship with Kerra Schroeder, who also played volleyball at Colorado.

Schroeder and Bakhtiari seemingly broke up on the down low sometime in 2017.

Bakhtiari and Shebby have been dating since October 2017, featuring on each other’s Instagram accounts as early as March 2018.

One year of knowing you Davey. Never thought I’d find someone who made me so unbelievably happy. You’re every single thing I ever wanted in a person. Whether it’s being woken up every morning by you attacking my face with kisses or us hiding around every corner in the house trying to scare each other, I know life with you will never be anything close to boring. I could go on and on, but i’ll save that for when you get home♥️ I love you

Since putting the athletic life behind her, Shebby has turned to her other passion…food. After discovering her culinary talents three years ago, Shebby has taken to sharing her easy-to-do wholesome recipes since April 2019.

She has a blog and a separate Instagram page to share recipes. If you want a nifty recipe for homemade kombucha, Food by Frankie is the place to go.