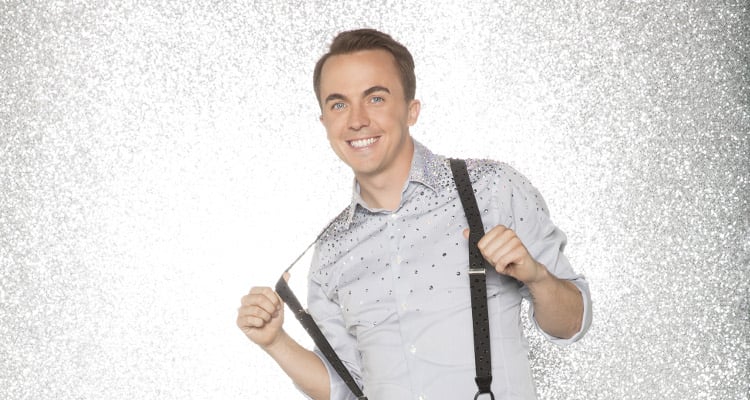 If you’re the type to watch old episodes of Malcolm in the Middle, you’re probably rejoicing right now. Frankie Muniz is making his big return to TV with Dancing with the Stars. And he’s being joined by season 19’s winning pro, Witney Carson.

Francisco Muniz IV was born in New Jersey to restaurateur, Francisco III and Denise, a nurse. He and his sister, Cristina were briefly raised in North Carolina before they returned to New Jersey following their parents’ divorce. His mother also took over his education at home.

At the same time, Frankie Muniz started his acting career. His first role was at the age of eight, playing Tiny Tim in a local stage production of A Christmas Carol.

Soon, he landed appearances on TV with commercials and on shows like Spin City and Sabrina the Teenage Witch. He made his small screen debut with the TV movies, To Dance with Olivia and What the Deaf Man Heard.

A young Muniz had a small role in the movie Lost and Found which led to him being cast in his breakout role. In 2000, he was portraying the titular Malcolm in Malcolm in the Middle, one of Fox’s most popular sitcoms, even today. He played a confused kid with a high IQ who broke the fourth wall by directly addressing viewers. It has won several Emmy Awards during its seven-season run, two of which were won by the pilot episode alone.

He snagged his first feature film role with My Dog Skip which was released around the same time as Malcolm in the Middle’s pilot episode. Muniz became a critically-acclaimed child artist with more acting offers pouring in. He starred alongside fellow child star, Amanda Bynes in Big Fat Liar, and appeared in Deuces Wild and Stuck on You before a major feature film turned him into a teen heartthrob.

Playing the titular role in Agent Cody Banks and its sequel marked his transition from a child artist to a “respectable actor.” He played the teen CIA agent seriously, training in martial arts and performing his own stunts.

I still always find myself stuck in the middle.

After Malcolm in the Middle aired its final episode in 2006, Muniz expressed his desire to expand beyond traditional acting roles. He starred in horror flicks, an R-rated comedy movie, and made an appearance in Criminal Minds.

He added more feathers to his cap with writing and producing a TV show, Granted. He also executive produced the animated film, Choose Your Own Adventure: The Abominable Snowman and was an associate producer for the movie, Choose Connor.

In recent years, he ventured into music joining the unsigned band, You Hang Up playing drums. He later joined the band, Kingsfoil and signed endorsement deals with SJC Drums and Imperial Cymbals.

His drumming career didn’t work out because of scheduling conflicts, but he’s now a manager for a band called Astro Lasso. The 31-year-old is the band’s designated driver and handles their monitor system and lights.

He earned a net worth of $40.0 million in his career, but it isn’t from acting alone.

Soundchecking for the first Kingsfoil show tonight in England!

Muniz put his acting career on hold to pursue his longtime interest of racing. In 2001, he drove the pace car at the Daytona 500 where he met Dale Earnhardt right before witnessing the car crash that took the racing legend’s life.

After signing with Jensen Motorsport as a driver, he entered 14 races during the 2006 Formula BMW USA season. He was one of 36 drivers selected to compete in the Formula BMW World Final at Valencia where he finished 29th.

As he got more competitive, he moved up positions, finishing second at Sebring Winter National Race. His fellow drivers also voted for him to receive the Jovy Marcelo Award. By 2009, he finished in the top 10 of every race he competed.

I have to say a huge thanks to everyone that was a part of the #TPCR40. Another incredible experience that I will remember forever. Sad it's over…

Injuries cut Muniz’s racing career short and he survived two mini strokes. He has since made his return to TV with Dancing with the Stars season 25 with Witney Carson. Muniz is dancing with a severe back injury sustained during racing. But he’s all smiles as he steps out with his girlfriend, Paige Price after rehearsals.

Muniz is remembered by the characters he has played, namely Malcolm and Cody Banks. But he wants his personality to come forth through Dancing with the Stars.

One thing that we learned about the actor’s personality is that he’s actually a very shy guy. After spending his childhood in front of the camera, Muniz can’t resist blushing every time Carson compliments his moves. In fact, DWTS producers have been trying to get him on the show for the past 12 years but he refused because he’s afraid to dance in public.

Muniz said, “No joke. I want to because I love to dance in my room by myself.” He continued, “But if anyone is around, my body just doesn’t move. It just doesn’t.” Nevertheless, he doesn’t want Carson to go easy on him.

Team Franney Pack performed an unexpectedly great foxtrot to “Sign of the Times” by Harry Styles. Like Malcolm, Muniz is in the middle of the leaderboard with a score of 19, the third best score of the night.

Watch what moves Frankie Muniz will bring next time when Dancing with the Stars airs Mondays at 8:00 p.m. EST on ABC.

Whose excited to watch #TeamFranneyPack this Monday?! #dwts