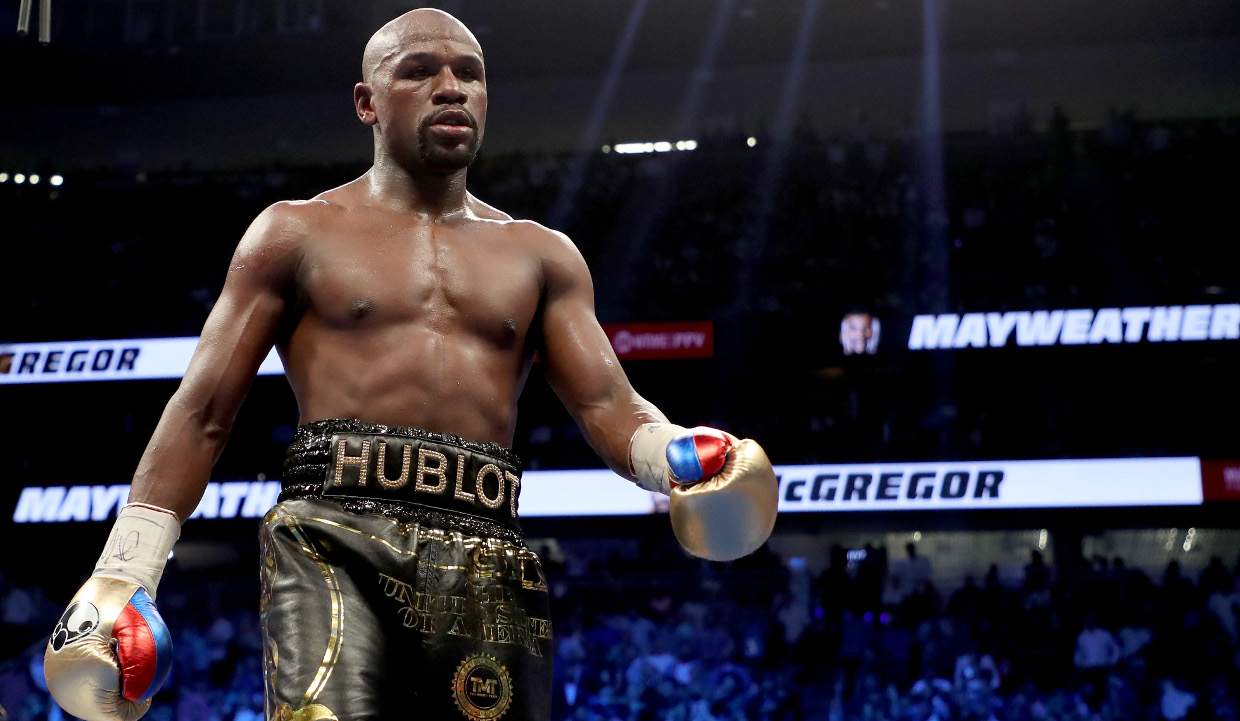 Renowned athlete and boxer Floyd “Money” Mayweather, Jr. will keep stacking piles of money to his net worth of $650 million as he celebrates his 40th birthday today (February 24). Holding the current title of the world’s highest-paid athlete, Floyd Mayweather, who’s simply known these days by the nickname “Money,” keeps sharing photos and videos flaunting his extravagantly rich lifestyle.

Mayweather is popular on Instagram for putting up pictures of his custom-made jewelry, his high-end luxurious car collection, and his private jet liner. He even has a separate Instagram account for his $20 million Las Vegas mansion, known as “Big Boy Mansion.” The boxer is enjoying his retirement by globetrotting and making more money with his investments. Mayweather also likes to share photos that show stacked bundles of bills every now and then.

A few days ago, Floyd Mayweather shared a photo of himself lounging in his private jet while looking at the view outside. The photo had piles of hundred dollar bills set on a table in front of him as he gazed out the airplane window. The boxing champ simply captioned it, “www.themoneyteam.com,” promoting his boxing organization and tagged his jet with the hashtag, “AIRMAYWEATHER.” Mayweather was once quoted saying he likes to share pictures with a lot of money because it inspires people to try and make it big by not giving up on their dreams and become wealthy, just like him.

It’s also no surprise that Floyd Mayweather loves to splurge a lot on his bling, a.k.a. his collection of fine designer jewelry. For instance, earlier this week he shared a photo of himself with his jewelry designer Greg Yuna, who’s popular for his Flawless Jewelry Store in New York. The boxing champion paid a visit to him and is probably getting more diamond-studded gold chains designed for himself, especially on the occasion of his 40th birthday.

On top of his $30 million car collection, which includes several Rolls-Royce and Bugatti models, Mayweather is now branching out his “Money Team” merchandise collection of clothing and accessories, and has got his close friend Justin Bieber to endorse it. Mayweather also has his own yacht to spend time on while enjoying his retirement days.

In fact, he’s got so much money that he sometimes forgets the value of his possessions. Last week, Mayweather enlisted the help of a new U.K.-based luxury car rental business called Celebrity Super Car Hike. But he decided he’d rather drive the luxury car himself and while most people would take extra caution when driving a high-end vehicle, Mayweather managed to actually damage it. The boxing legend reportedly exclaimed, “He’s gonna kill me,” when he realized that he had scraped the wheels of the $350,000 Rolls-Royce Phantom rental. Fortunately, there was nothing much to worry about, as the owners found the legendary boxer damaging the car to be worth the opportunity to spend time with him, and they even refused to take the money when Mayweather offered to pay them for the damage.

The flirtatious multimillionaire was also recently in the news for partying with a 19-year-old British shop assistant named Raemarni Ball, while hanging around in the U.K. Ball had shared pictures of her with Mayweather, and she reportedly even joined the boxer on his private plane back to the United States. However, the news got a little juicier when the girl’s boyfriend denied the rumors of her hooking up with the champion.

As we previously mentioned, today marks Floyd Mayweather’s big 40th birthday and in honor of the milestone, he has announced on Instagram about where and when he’ll be celebrating. This Friday (February 26), Mayweather will throw his birthday bash at the Oasis Uptown Club in Charlotte, North Carolina, and has invited all, provided you manage to get in or book yourself a VIP area. In true Mayweather style, the place will undoubtedly be packed with his celebrity friends, gorgeous models, and “The Money Team” spending a whole lot of, well, money. With his $650 million net worth still on the rise, let’s wish Mayweather a long healthy life to enjoy it all!