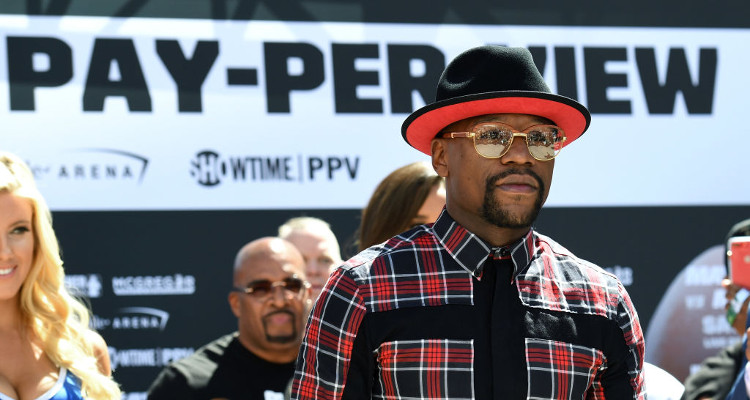 Floyd Mayweather Jr.’s net worth is gaining attention ahead of his big showdown with Conor McGregor on Saturday. Maybe because he’s $400.0 million rich! He certainly lives up to his nickname, “Money.”

Floyd Mayweather Jr. and Conor McGregor haven’t had a bout in the ring yet, but we know who’s winning in terms of money. Floyd Mayweather goes nickname “Money” —perhaps because many would put their money on him. Or that he has plenty of it. After all, the undefeated boxer has a net worth of $400.0 million. How did he become one of the richest athletes ever? Find out in Floyd Mayweather Jr.’s net worth.

How Rich Is Floyd Mayweather Jr.?

There are different estimates but most put Floyd Mayweather’s net worth at $400.0 million. Though some sources claim it crossed the $600.0 million mark. Money, as he’s called, is one of the top earning fighters in the world and ranked #16 in Forbes list of the World’s Highest Paid Athletes. Besides ranking in the Celebrity 100 list, he’s one of the Richest Entrepreneurs under 40 in America.

The Michigan native comes from a family of boxers. His father, Floyd Mayweather Sr., is credited for teaching his sons his bout-winning skills. Since his professional debut in 1996, boxing has been his primary source of income. According to Forbes, Mayweather’s latest earnings estimate at $340.0 million. Out of his earnings, $32.0 million comes from winnings while $12.0 million comes from endorsement deals.

Conor McGregor, with a net worth of $35.0 million, ranks eight spots below Mayweather as one of the highest paid athletes. The table below illustrates a comparison between their incomes.

Money on the Money

With 15 world titles, and being undefeated across several weight classes, Mayweather puts his money where his mouth is. And he has a knack for drawing audiences for pay-per-view matches. He hung up his gloves twice and is back from retirement to fight McGregor, but he earned a pretty penny from his various matches.

The table lists some of his biggest paying matches to date.

In Mayweather’s match with Pacquiao, he won with unanimous decision, though the fight didn’t live up to its hype. It was the largest single payday in the history of boxing, and no boxer before Mayweather earned such a large sum from one fight. But that record may be broken soon.

According to reports, if he attracts enough pay-per-view in his match with McGregor, he could take home a whopping $270.0 million and his earnings could surpass $1.0 billion. Mayweather’s baseline for the fight is set at around $100.0 million. McGregor will also take his highest paycheck to date, with a baseline of $75.0 million. These are rough estimates and their respective paychecks depend on how many people pay to watch the match. The McGregor fight might turn him into a billionaire, and one of the only athletes to make all that money from the sport rather than lucrative endorsement deals.

From “Pretty Boy” to “Money”

The 40-year-old is just as savvy with business as he is brimming with confidence in the ring. Not only is he the king of attracting PPVs, he surpassed every boxer, including Mike Tyson, in generating revenue. He would remain mostly untouched in the ring because of his superior defense skills which earned him the nickname “Pretty Boy.” But when he found his superpower of getting people to pay to watch him throw punches, he christened himself “Money.”

He has little to no sponsors for his matches. According to the boxer himself, it’s because his baseline is too high. A $1.0 million baseline entry for Floyd Mayweather? That’s too little! But that’s only partially the reason. Mayweather has a criminal history which makes brands hesitant to associate with him. Nevertheless, he inked deals with Hublot, FanDuel, and Burger King.

But he doesn’t need to partner with other businesses. He’s a shrewd businessman by himself. After pulling out of Top Rank, he founded his own promotion firm, Mayweather Promotion. He also launched The Money Team, his own brand of merchandise which sells T-shirts, training equipment, as well as other clothing and accessories. TMT sales reportedly added $15.0 million to his income.

Where Does the Money Go?

With so much money in the bank, what does Floyd Mayweather Jr. do with it? Splurge it of course! From $2,000 a week haircuts to his Big Boy Mansion, Mayweather has some insane expenses. A party animal, he’s said to carry Ziplocs of cash to party and shop. Even his Instagram is full of wads of cash. And don’t expect him to wear the same pair of shoes or boxers more than once. He leaves his once-worn shoes in hotel rooms for the staff. At least he throws away the boxers after wearing them once!

He’s also very specific about his cars. He owns two fleets in Miami and Las Vegas. All of his Miami cars are white and his Vegas cars are black. His Vegas fleet alone is worth $15.0 million. But to get between Miami and Vegas and everywhere, he takes his private jet. As for his entourage, his bodyguards fly in another private jet because Floyd’s to scared about too much weight in one plane. Well, there can only be one heavyweight in a G5.

But perhaps the most expensive thing he owns is his Las Vegas home called the Big Boy Mansion. He let ESPN tour his 20,000 sq.ft. mega-mansion which has its own Instagram page. It was custom-built and the price is not disclosed. The Instagram bio reads, “This mansion speaks because it was paid in cash,” ‘nuff said! After his second retirement, he bought another mansion in Miami worth $7.7 million and he paid for it in cold hard cash.

Mayweather has a history of domestic violence. He showered his women with expensive gifts when he dated them, including an expensive engagement ring to ex, Shantel Jackson. But things would go south soon. Mayweather has not only paid fines, bails, and other legal expenses, he also served jail time. He’s currently dating Abigail Clarke.