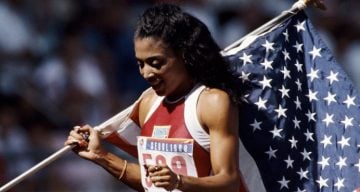 How did Flo-Jo die? Who is that, you ask? Think of her as the Serena Williams of her time, but for track and field. Her birthday was yesterday, which would have made her 58, so we thought we would give you some information on a legendary athlete. Keep reading if you want to learn more about Flo-Jo’s cause of death.

Olympic gold medalist, Florence “Flo-Jo” Joyner, was born as Florence Delorez Griffith on December 21, 1959, in the Watts neighborhood of Los Angeles, California. She was the seventh of 11 children.

Joyner’s father was an electrical technician, and her mother was a teacher. But her parents divorced, and the kids were later raised by their mother.

Flo-Jo began running when she was seven years old. She competed for Jordan High School and went on to compete at a college level. She attended California State University at Northridge, but withdrew when she had to help support her family.

Joyner was working as a bank teller and beautician when she was later convinced by her coach and brother-in-law, Bob Kersee (who is married to track star Jackie Joyner-Kersee, Flo-Jo’s husband’s sister), to transfer to University of California.

Later, Joyner received a degree in psychology in 1983 while being a rising sprinter.

Flo-Jo married fellow athlete Al Joyner in 1987, and he later became her coach.

Joyners Jump Camp we will be back stronger & wiser

In November 1990, she gave birth to a daughter, Mary Ruth Joyner, who was named “Mo-Jo” by the media.

Joyner was a three-time Olympic gold medalist and was named “The Fastest Woman in the World.” Think of her as the female version of Donovan Bailey or Usain Bolt but with spandex outfits and long, decorated nails —she loved fashion.

Next to her love for style was her love for speed, despite retiring every once in a while. She was considered the fastest woman throughout the ‘80s and was at the top of her game.

Joyner also worked with Bob Kersee as her coach again when she decided she wasn’t ready to retire and trained for the 1988 Olympic Games. She retired in 1989 and moved on to design the uniforms for the NBA’s Indiana Pacers.

Flo-Jo was picked by former President Bill Clinton to be co-chair of the President’s Council on Physical Fitness and Sports. She also created the Florence Griffith Joyner Youth Foundation and her own workout video, The Flo-Jo Workout: Mind, Body and Spirit.

But despite her many accomplishments, Joyner was the subject of a rumor that claimed she was using performance enhancement drugs, which she repeatedly denied.

“I know exactly what people are saying about me,” said Joyner. “And it’s simply not true. I don’t need to use drugs. They can come and test me every week of the year if they want to. I’ve got nothing to hide.”

Joyner took 11 drug tests in 1988 alone and never failed any of them.

So, what happened to Flo-Jo? When did Flo-Jo die?

On September 21, 1998, Joyner died after suffering a heart seizure in her home in Mission Viejo, California. She was 38 at the time and was survived by her husband and daughter. Two years before, she had a seizure on a plane but the family said very little about the incident.

On this day, December 21,1959, Florence Delorez Griffith (a.k.a Flo-Jo ) was born. She still holds the title "The Fastest Woman in History". Flo-Jo also holds the all time world record in the 100 meter dash at 10.49 seconds.This record was set in the 1988 Summer Olympics held in Seoul. Happy Birthday #flojo! You were and still are an inspiration.#restinginpower #restinginpeace #florencegriffithjoyner #thefastestwomanintheworld #wearehistory #alldayeveryday #thegoat ??????‍♀️????❤?

Florence Joyner still holds the world records for 100- and 200-meter events and will forever be remembered as “The Fastest Woman in the World.”