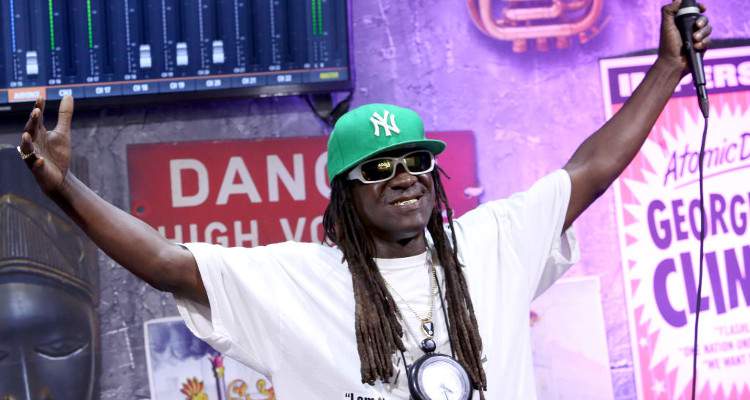 Age has not mellowed the fiery rap group, Public Enemy despite being in the arena for almost three decades! Their hype-man, Flavor Flav is busy singing, rapping, acting, and even fighting thanks to his various ventures! Even though Flavor Flav’s net worth is estimated between a tidy $3.0 and $9.0 million, his contribution to the evolution of hip-hop and rap is legendary.

In a shocking incident that occurred at South Point Casino in Las Vegas on Tuesday, January 23, 2018, rap legend Flavor Flav was reportedly punched by a stranger, who accused the rapper of insulting his mother. Somebody shot a video of the incident, and the clip has since gone viral. In it, Flavor Flav can be seen taking one punch after another, even as security guards try to protect him!

The flamboyant rapper was wearing a Muhammad Ali “Rumble in the Jungle” jacket. Fighting is something that Flav is accustomed to, especially after joining legendary hip-hop group, Public Enemy —but strictly of the verbal variety! People want to know more about what the rapper has been up to and how rich Flavor Flav is. Will this recent debacle affect his earnings? We have details about Flavor Flav’s net worth in 2018, right here.

Flavor Flav’s Net Worth Compared to Other Rappers

– Flavor Flav co-founded and remains an important member of influential rap group, Public Enemy, which broke into the mainstream with their second album, It Takes a Nation of Millions to Hold Us Back, in 1988.

– He majorly contributed to their success with albums like Fear of a Black Planet, Apocalypse 91…The Enemy Strikes Back, He Got Game, There’s a Poison Goin On, Most of My Heroes Still Don’t Appear on No Stamp, and The Evil Empire of Everything.

– Flav released only one solo album in his career, Hollywood, which featured songs like “Let it Show,” “Flavor-Man,” “Too Wrongz,” “Bridge of Pain,” and “Hotter than Ice.”

– Flavor Flav’s songs with Public Enemy have inspired audiences all across the country and include “Don’t Believe the Hype,” “Bring the Noise,” “Welcome to the Terrordome,” “911 is a Joke,” “Fight the Power,” “Can’t Truss It,” “By the Time I Get to Arizona,” and “Harder Than You Think.”

Also Read: Kendrick Lamar’s Net Worth 2018: The Steady Rise of the Humble Rapper from Compton!

– Flavor Flav’s TV shows also put his name out there and made him a recognizable face among modern-day audiences. Most notably is his VH1 reality show The Surreal Life, followed by Strange Love, Flavor of Love, and the hit comedy, Under One Roof.

– He appeared on other shows like The Farm, Nite Tales, WWE Raw, Celebrity Wife Swap, Dr. Fubalous, and YooHoo & Friends.

– Even though Flavor Flav owns several properties, he mostly spends his time in his Las Vegas, Nevada property. Flavor Flav’s house is 3,708 sq.ft., has four bedrooms, three bathrooms, and was reportedly purchased for approximately $685,000.

-The rapper has to support his eight children, born to three different women. As long as people want to listen to relevant, political hip hop and rap music that challenges the intellect and appeals to the ear, Public Enemy will always have an audience. And the man leading the hype will undoubtedly be Flavor Flav!