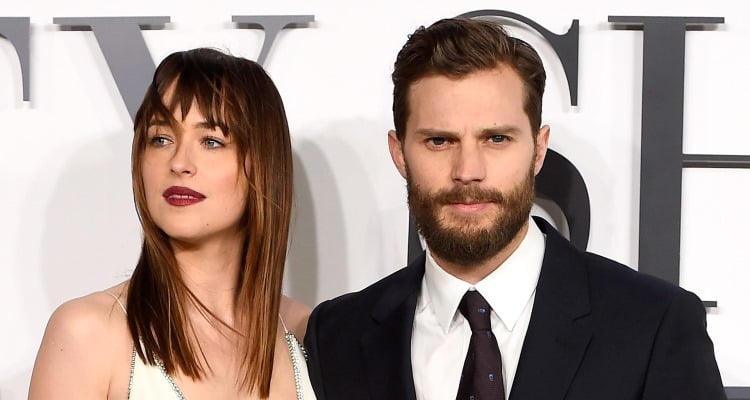 Jamie Dornan and Dakota Johnson were joined by his wife, Amelia Warner on the sets. Amelia Warner and Jamie Dornan have been married since 2013, while Johnson is dating on-again, off-again boyfriend, British musician Matthew Hitt. We can’t say we blame Warner for accompanying her husband on set while he filmed a sensual massage scene with Johnson! Although we suspect that there might have been some initial awkwardness, the three were later seen frolicking in the sea after wrapping up the shoot. The trio seemed at ease, as they had a good time in the water soaking up the sun while sporting sunglasses. Thankfully, being an actress herself, Jamie Dornan’s wife understands the demands of the job. Phew!

Dornan looked handsome, as he flaunted his perfect physique and washboard abs, while Dakota looked gorgeous in her lemon-colored bikini. The cast and crew are said to be shooting a wedding sequence in France. Fifty Shades Darker is all set for release next year, while the third installment is slated for release in 2018.

Author E.L. James penned the trilogy that became so popular; it overtook Harry Potter in sales. She is pleased with the way the sequels are turning out, and posted a photo on Instagram captioned, “Thank you to the most fantastic crew and production team. You are all amazing.”

British singer, Rita Ora also stars in the film as Dornan’s character, Christian Grey’s sister, Mia and will reprise her role in the trilogy. We just can’t wait to see how the movie turns out!