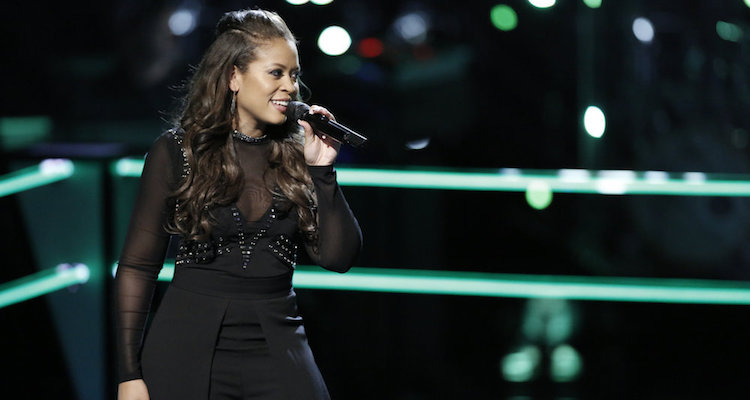 If you’ve been watching The Voice, then you already know that Felicia Temple is one of the contestants to look out for. With Felicia Temple, The Voice gets another level of talent added to it. So, if you want to learn more about the 28-year-old, then have a look at our Felicia Temple wiki!

Felicia Temple was born on January 28, 1989 and grew up in the town of Teaneck, New Jersey. According to her profile page for The Voice 2017, Temple comes from a musical family and her father has been touring with the Sugarhill Gang for as long as Temple can remember. She grew up reading sheet music and playing the piano, which earned her the nickname “Felicia Keys.” (We can clearly see why!)

While pursuing a solo career in music, Temple earned her nursing degree and became a perioperative nurse at Holy Name Medical Center, in New Jersey. There’s no shortage of Instagram pics of her in scrubs or a white coat while on one of her shifts at the hospital!

Happy nurses make happy patients ???? I’m TOO excited for the premiere of @nbcthevoice on Feb 27th! We’re less than 2 weeks away!! Will you be tuning in? #thevoice

If there’s anyone on The Voice who’s more thankful to be alive right now, it’s Felicia Temple. Over a year ago, before her time on the show, Temple was diagnosed with carcinoid cancer and had the right side of her colon removed, in order to save her life. She is currently cancer free and used a series of Instagram pics to reflect on her journey to recovery.

Also Read: Andrea Thomas Wiki: Everything You Need to Know about “The Voice” Contestant

“As a cancer patient and a nurse, I couldn’t be prouder to work at Holy Name. It’s no coincidence that the hospital I work at is the first in the US to offer this new Gallium 68 scan for patients like me with neuroendocrine tumors. God is so good. If I lived or worked anywhere else this scan would not be available to me. Tomorrow is the day I’ve been waiting for for months. The scan that will finally let me know I’m 100% no doubt cancer free! Prayers up for me people!”

As a cancer patient and a nurse, I couldn't be prouder to work at Holy Name. It's no coincidence that the hospital I work at is the first in the US to offer this new Gallium 68 scan for patients like me with neuroendocrine tumors. God is so good. If I lived or worked anywhere else this scan would not be available to me. Tomorrow is the day I've been waiting for for months. The scan that will finally let me know I'm 100% no doubt cancer free! Prayers up for me people! ??

She Has a Boyfriend

She’s got talent, a kind heart, and intellect—so it’s no surprise that she’s seeing someone. Temple is currently dating Leonard “Lenny” A. Williams, a business professor in New Jersey. In late 2015, he had an issue with his heart called premature ventricular contraction, which at one point made his heart pump 40,000 extra beats per day. He was treated by Dr. Desai at Holy Name Medical Center, according to his Instagram account. A few of his posts are dedicated to Temple and her journey on The Voice, as well as the times they spent together.

Let me explain this part of my life as I continue to be transparent on social media. Since late 2015, I had an issue with my heart called, Premature ventricular contraction. At one point last year, I had 40,000 extra heart beats a day. Which lead to exhaustion, weight gain and more. After meeting an excellent cardiologist and having surgery, it was all corrected. Today, my final post-test (echocardiogram) is to see if my heart is completely healthy. The moral of the story is you never know what someone is going thru behind all their wins. Also, no matter your age, please attend regular visits to the doctors and take all symptoms seriously!! Always check in on friends and family behind all the scenes. Health is the biggest key to success. Special thanks to Dr. Desai, Holy Name and Hackensack Hospital for all the great assistance. Now back to work! Thank you all for the bday wishes! #trill #winnershaveproblemstoo #cardiac

Before Temple made it to the Battle Rounds, she wowed the coaches (and turned all their chairs, except for Adam Levine) with her cover of “All I Could Do Was Cry.” One coach who was taken by Temple’s performance was Alicia Keys, who was so amazed she got up and performed an impromptu duet with Temple of Keys’ hit song, “Fallin’.” From that moment, it was clear to everyone that Temple was meant to be on Team Alicia.

But it wasn’t until the Quizz Swanigan and Felicia Temple Battle Rounds that allowed temple to be stolen by Team Blake, after Keys chose 13-year-old Swanigan’s performance over Temple’s. Good thing Temple was walking slowly, or else she would’ve missed Shelton’s “steal,” which saved her spot on the show. Could Blake have another winner on his hands?

Temple’s journey on The Voice can be found on YouTube and you can watch her in the Knockout Rounds on Mondays and Tuesdays at 8:00 p.m. EST on NBC.