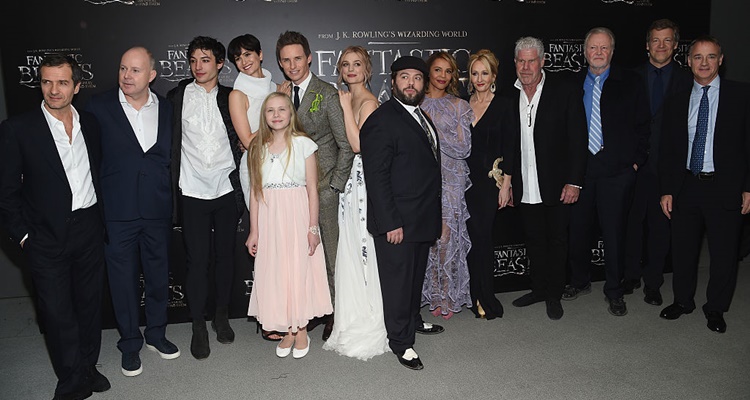 Fantastic Beasts and Where to Find Them is J.K. Rowling’s latest fantasy adventure from the Harry Potter universe. This film is an adaptation of Rowling’s 2001 book of the same title, and marks her screenwriting debut.

Fantastic Beasts and Where to Find Them takes place in the world of Harry Potter, and J.K. Rowling is both the producer and screenwriter for the film. Since its announcement in 2013, this has become one of the most anticipated movies of the year. From the first teaser trailer’s relase in April 2016, Fantastic Beasts and Where to Find Them has been looked forward to by both critics and fans of the successful Harry Potter franchise. Let’s take a look at the cast and reviews of this brand new fantasy adventure!

Fantastic Beasts and Where to Find Them Release Date

Fans looking forward to Rowling’s latest movie adaptation will be excited to know that the Fantastic Beasts and Where to Find Them release date is today (November 18). Theater’s will be packed this weekend, so make sure you get your tickets early!

The wizarding world of @jk_rowling lives on in #FantasticBeasts – Arriving in theaters November 18. Watch the final trailer now. pic.twitter.com/C4hWAGBVvB

Fantastic Beasts and Where to Find Them Cast

Eddie Redmayne plays Scamander, the introverted wizard and eventual author of Fantastic Beasts and Where to Find Them. Redmayne’s most noted work is his Oscar-winning performance, when he portrayed Stephen Hawking in The Theory of Everything. Katherine Waterston plays Porpentina Goldstein, the grounded employee of the Magical Congress of The United States of America, who later becomes Scamander’s wife.

Dan Fogler has the role of Scamander’s trusty partner and friend, a No-Maj (American muggle) named Jacob Kowalski, while Alison Sudol will play Queenie Goldstein, Porpentina’s sister. We also see Ezra Miller, who we will see as the Flash in the upcoming Justice League movie.

The handsome Colin Farrell is the high-ranking Auror, Percival Graves, who’s tasked with racking down Scamander. Academy Award winner, John Voight also stars in this film as Henry Shaw Sr., the father of a U.S. Senator whose grandson is a believer in magic.

We’ll see Johnny Depp as Gellert Grindelwald, a dark wizard considered second only to Voldemort. He will only make a brief cameo this movie, but he has an important role in the second installment of the film, scheduled to be released in 2018. Fans of the original series will remember Grindelwald, so there is hope that the second film will explore the dark wizard’s relationship with Albus Dumbledore.

Fantastic Beasts and Where to Find Them: Reviews & Ratings

The film has received positive reviews. Rotten Tomatoes has given the film a high rating of 78% based on over 100 reviews. According to the site, the film “draws on Harry Potter’s rich mythology to deliver a spinoff that dazzles with franchise-building magic all its own.” Metacritic gives the film a mostly favorable review, with a metascore of 67 out of a possible 100. IMDB users have rated the movie a high of 8.2 out of 10.

Regarding the political undertones of the film, Richard Lawson from Vanity Fair says, “Fantastic Beasts is forlorn and captivating, a rare blending of cheery, witty entertainment with a troubled worldview.”

The rich visuals of the film take you back to the magical universe of Harry Potter, but tickles your imagination in a way different from the original movies. This film is darker than its predecessors, with a lot of action in its old New York settings, a whisper of politics, and a more adult tone.