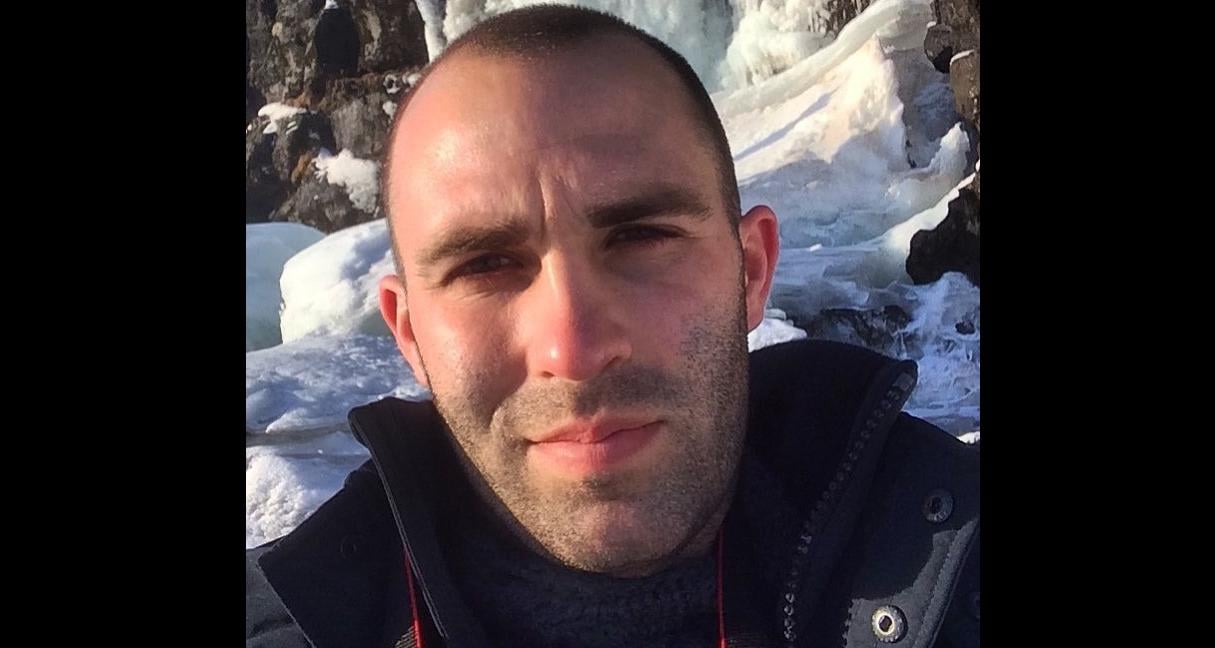 In an Instagram post on August 20, 2018, Garrett Clayton revealed that he is gay and that he has been in a relationship with his boyfriend Blake Knight for a long time. Knight reciprocated the heartfelt message by posting several pictures of himself and Clayton on his own Instagram account, adding that he loves Clayton dearly. Knight works as a screenwriter in Los Angeles, he loves to travel, and he  clearly loves his dog. But what else do we know about Garrett Clayton’s boyfriend? Read on to find out!

People have been buzzing about young movie star Garrett Clayton since Monday, August 20, 2018, after the young heartthrob took to social media to announce that he is gay.

In an Instagram post, the 27-year-old Teen Beach Movie star said that he was motivated to “out” himself after playing the role of a socially awkward high school student who wrestles with thoughts of suicide in his upcoming film, Reach.

Clayton also revealed that he had been living with a boyfriend “for a long time.” Clayton said, “’I have personally dealt with suicide within my own family, intense bullying in high school, and – on top of it all – myself and the man I’ve been in a relationship with for a long time (@hrhblakeknight) have both experienced shootings within our hometown school systems, and have witnessed the heartache that takes place in affected communities after such tragic events.”

Who Is Blake Knight?

Clayton’s boyfriend is a man named Blake Knight, and now people are keen to know more about him. Knight is a screenwriter for films and TV and works in Los Angeles, California.

He is self-employed. He has a brother named Sam Armstrong and a sister named Laney Armstrong. Knight loves animals, especially dogs, and it looks like he has two of them, Dart and Dash. He loves to litter his Instagram account with pictures of his adorable fur buddies!

Knight Gushes about His Boyfriend Clayton

Knight wrote, “So proud of @garrettclayton1 today! He’s overcome a lot, and still has one of the biggest hearts of anyone I’ve ever met. Handsome, talented, hilarious, kind… what’s not to love?!” 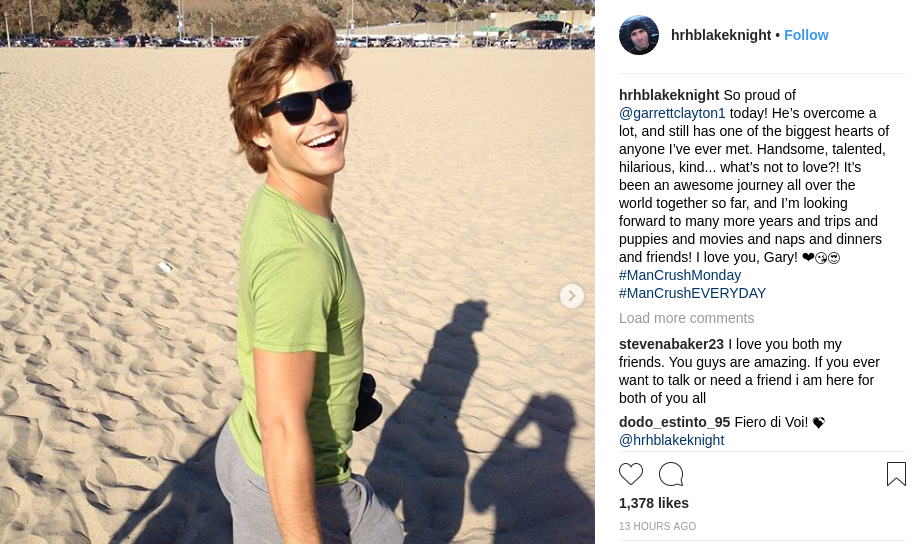 Knight added, “It’s been an awesome journey all over the world together so far, and I’m looking forward to many more years and trips and puppies and movies and naps and dinners and friends! I love you, Gary!”

He Loves to Travel

Knight loves to travel and has posted about his likes on his Facebook account. One of his favorite places in the world is Venice, Italy, and he simply loves spending time there.

From the black sand beaches of Iceland to the bustling boroughs of New York City, Knight travels all over the place for work and pleasure.

He also loves the beautiful sea-front little town of Mykonos, Greece, which he calls “little Venice,” and has posted a photo of his time there, as well.

Knight is also passionate about philosophy and reads up on it regularly. His Facebook account contains one of his favorite quotes by the ancient Greek philosopher Plato, which says: “The price good men pay for indifference to public affairs is to be ruled by evil men.”

As an avid reader, he seems to have a big book collection of his own. Some of his favorite books include “Memoirs of a Geisha” by Arthur Golden,“The Book of Symbiosis,” “One Hundred Years of Solitude” by Gabriel Garcia Marquez, “The Pillars of the Earth” by Ken Follett, and “The Dressmaker” by Rosalie Ham.

His social media accounts are proof that he likes to get a little artsy, too. He posts some pretty exceptional pieces of his photography skills on his account, and not just the images of his dogs or all the wonderful places he’s been.

Knight’s Courage Has Made Him Happy

Knight and Clayton did not talk about their relationship to the media until now, but after working on the film Reach, Clayton felt compelled to come out to the public.

His Instagram post revealing his sexuality has inspired many others, especially those who may have been bullied for being different. And it looks like his boyfriend couldn’t be prouder!

Once Clayton made his sexuality and his relationship with Knight public, Knight also opened up and posted several pictures of himself with Clayton on his Instagram account. The two have been together for at least a few years now. 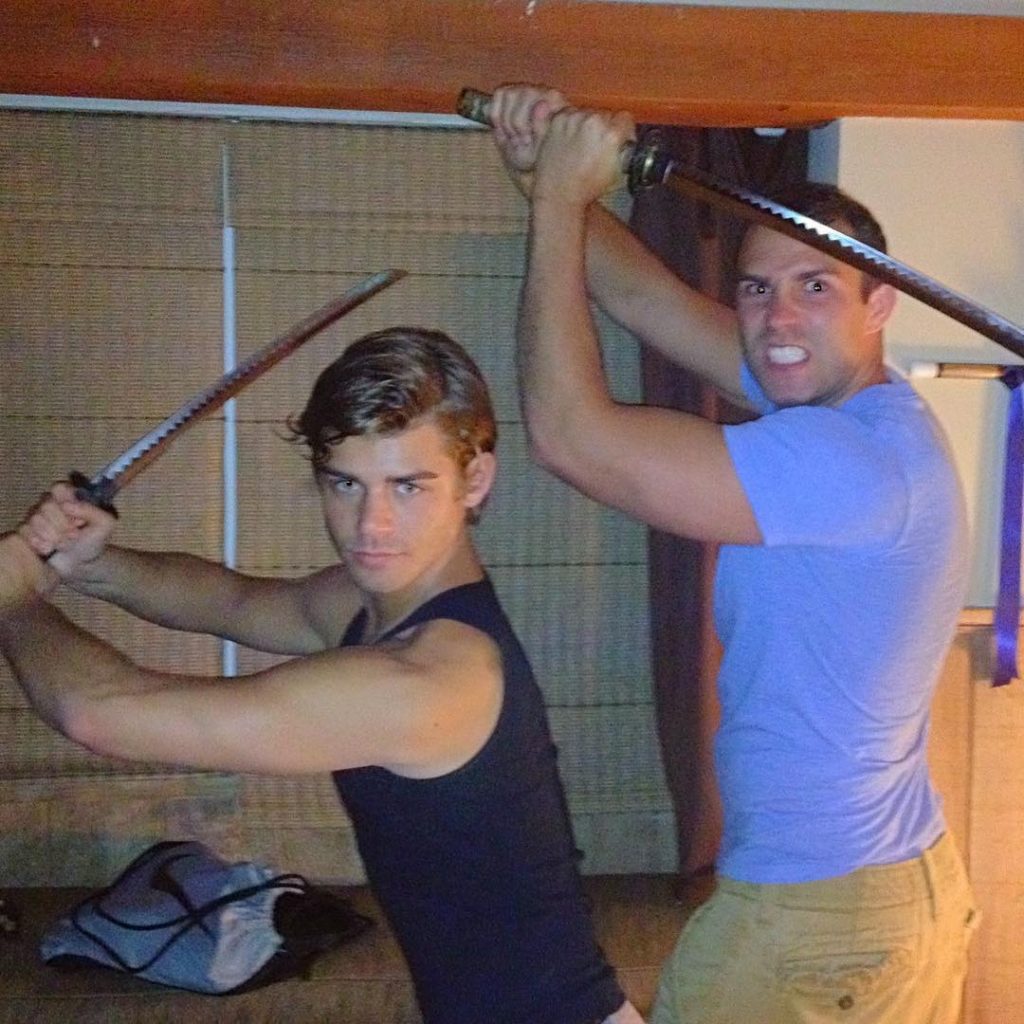 Knight and Clayton have gathered the courage to face up to the world and be comfortable with their relationship being in the public eye.

Looking back on the photos of the two of them from years ago, it only looks like they’ve become closer, stronger, and even more in love.