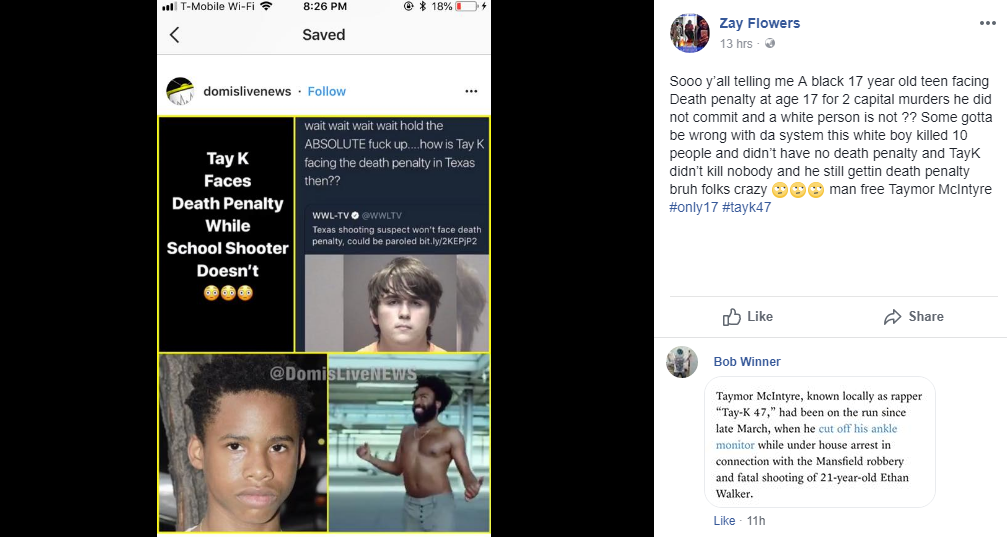 A Facebook post claims that Taymor McIntyre a.k.a. Tay-K is facing the death penalty for the murder of Ethan Walker. The post juxtaposes McIntyre’s supposed sentence against the Santa Fe shooter, Dimitrios Pagourtzis, who won’t be receiving the death penalty. But is Tay-K looking at capital punishment at all? Let’s look at both Taymor McIntyre and Dimitrios Pagourtzis’ charges and separate fact from fiction.

A Difference in Sentences?

This is America and we are all judged differently even when accused of the same crime … Both 17 and in Texas but only #TayK is facing the death penalty, #DimitriosPagourtzis The gunman opened fire at Santa Fe High School killing 10 people.

Santa Fe, Texas was rocked by a horrific shooting at a high school on May 18, 2018. Dimitrios Pagourtzis killed 10 people, for which he is charged with capital murder.

But the harshest punishment the 17-year-old is facing is a life sentence with the possibility of parole. That caused uproar in most circles who were demanding justice.

In an apparent response to this news, social media users are comparing Dimitrios Pagourtzis and Taymor McIntyre’s sentences.

McIntyre, better known by his stage name, Tay-K, is a rapper who went viral after his 2016 arrest. He and his accomplices were charged with capital murder when a home invasion in July 2016 resulted in the death of 21-year-old Ethan Walker. Another capital murder charge was added for the death of 23-year-old Mark Anthony Saldivar.

A Facebook user wrote, “A black 17 year old teen facing Death penalty at age 17 for 2 capital murders he did not commit and a white person is not ?? Some gotta be wrong with da system this white boy killed 10 people and didn’t have no death penalty and TayK didn’t kill nobody and he still gettin death penalty [sic].”

The sentiment appears to be echoed by several others on social media. And this is where the rumors spread out of control.

Cyberspace became divided over the two 17-year-olds. One killed 10 people in a horrific massacre while the other was present during the deaths of two and responsible for a spate of violent crimes. Both are facing capital murder charges but are supposedly getting different punishments.

Some argue that race is a factor in Taymor McIntyre’s sentencing. He is a black male, and social media users argue the justice system is biased.

Did you know that the Santa Fe terrorist who just murdered 10 people there won't face the death penalty? If Taymor McIntyre is facing it for one murder,this bastard should also. Both were 17,but we know the difference don't we?

But are Taymor McIntyre and Dimitrios Pagourtzis’ sentences different? The reality is that they are not. The fact is, neither of their sentences will include capital punishment!

The Texas shooter won’t receive the death penalty, and neither will Tay-K. And the reason is not different, either. The Internet has a way of spawning these rumors, that then get repeated and spreads like wildfire. The truth is, according to the Supreme Court, the rumor of Tay-K receiving the death penalty is false.

I’m not a fan of that Tay K child but him facing the death penalty is so sad. Especially when he never got a fair shot at life, suffering while people just play his music. Too sad man

Two women, Megan Holt and Ariana Bharrat, came up with a home invasion plan where they’d seduce Ethan Walker. The women would then let in McIntyre and others in the house to burglarize the home.

But things went awry, and a confrontation ensued. Walker was fatally shot during the altercation.

McIntyre and his accomplices were arrested in July 2016. Tay-K was placed under house arrest while a certification hearing would decide if he would be tried as a juvenile or adult.

But the teen cut off his ankle monitor and broke out of house arrest. A manhunt for McIntyre ensued while he made his way to New Jersey and recorded his Billboard charting song, “The Race.”

While on the run, he brutally assaulted a 65-year-old man. McIntyre was caught two weeks after the music video was released.

One of McIntyre’s accomplices was sentenced to 20 years in prison. Four others are awaiting their trials while in state custody.

Megan Holt reportedly testified against her codefendants to get the capital murder charges against her waived.

If convicted of capital murder in Texas, the defendant could receive a life sentence or worse—the death penalty. But McIntyre, and even the Santa Fe shooter, won’t be facing the death penalty.

Both Tay-K and Pagourtzis were under the age of 18 when they committed their crimes. Their age and prior Supreme Court rulings make them exceptions to the death sentence.

The ruling by the U.S. Supreme Court in the Roper v. Simmons 2005 case bans juvenile offenders from receiving the death penalty. Additionally, the 2012 Miller vs. Alabama case led to the Supreme Court ruling that life without parole is not a mandatory sentence for perpetrators under 18 years of age, either.

SCOTUS ruled that a state may not execute someone for a crime committed before their 18th birthday. Tay-K, a/k/a Taymor Travon McIntyre, was born June 16, 2000 and is age 17. The State will not seek the death penalty.

The maximum sentence for juvenile offenders guilty of capital murder is a life sentence. But the convicted prisoner can apply for parole after serving 40 years.

Taymor McIntyre and Dimitrios Pagourtzis are facing life sentences for their crimes. Race is not a factor in either decision.

Both juvenile offenders can apply for parole after 40 years. However, given the nature of their crimes, an early release for McIntyre and Pagourtzis seems unlikely.

Nonetheless, there’s a social media debate about whether Tay-K ’s crime is as severe as Pagourtzis’ and their respective punishments.

However, the claim that Taymor McIntyre is facing the death penalty while Dimitrios Pagourtzis isn’t, is completely false. So, beware of believing everything you read on the Internet and always get the hard facts first! (In fact, even rapper T.I. was duped into believing that Tay-K was getting the death penalty, based on a viral meme that spread on May 22. T.I. shared the image on his Instagram—and his strong opinions on the matter while slamming the justice system—but people are now calling him out for believing the fake news before getting the facts!)

This is America!!!! We MUST START STANDING BY OURS THE SAME WAY THEY STAND BY THEIRS!!!!! We can’t keep just throwing ours away when they fuc up,while they give they people every consideration possible …. FUCTHAT!!!! It ain’t fair,& It aint right!!! Hold Every last one of US as Americans to the same standards no matter the color of their skin. Or else we gon do for ours the same you’re doing for yours!!! Period!!! #FreeTayK✊? #USorELSE MAJOR POINT: I should point out that neither of these gentlemen have been convicted. Only arrested in suspicion of the crimes their charged with. But for the fact that one of them was arrested on the scene of the school shooting that claimed 10 lives. The other was a warranted arrest with little physical evidence,just word of mouth. So the question is how is the D.A. seeking the death penalty for Tay K & not the other guy? AND THAT HES A MINOR SHIT WEAK…THEIR THE SAME AGE!!!!!!

I personally don't mind the death penalty. I don't think we should be throwing them at 17 yr olds. But if Taymor Mcintyre gets one then Dimitrious Pagourt deserves two.