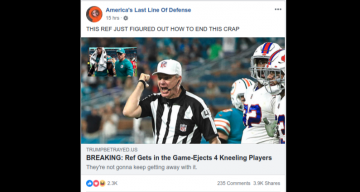 The Facebook page known as “America’s Last Line of Defense” had posted a report alleging that four players were ejected from the field in Miami by a referee for kneeling down when the national anthem was being played. This incident supposedly happened at the game between the Miami Dolphins and the New York Jets on September 16, 2018. Is this report true or is it a hoax? We decided to find out the truth about this claim!

There is a Facebook page titled “America’s Last Line of Defense” and their latest report claims that referee Jerry Noonan threw out four players who knelt down when the national anthem was played during the game between the Miami Dolphins and the New York Jets. The supposed ejection of these four players happened at the Miami, Florida venue, with the referee citing the reason as “multiple counts of unsportsmanlike conduct.”

The report quotes referee Noonan saying to the reporters, “I don’t care what reason they think they have. I was a marine. On my field, you will stand during the National Anthem. If not, I will eject you if you’ve ever done it before.”

This Report Is Not True

No players were ejected by the referee for kneeling down during the time the national anthem was played and here’s why.

Everything on This Site Is Pure Fiction

First of all, this report was published on the “America’s Last Line of Defense” Facebook page. It’s a page that is notorious for posting fake news that angers critics of liberals.

The website also has a clear disclaimer that says that none of what is posted is true. In fact, the disclaimer clearly states that, “Everything on this website is fiction.” So, there is absolutely no reason for anyone to believe that this alleged ejection of the four players actually happened.

There are also other glaring mistakes in the report that prove that this supposed ejection of players never occurred.

The Game Happened in New Jersey

The report claims that the game and the ejection of players happened in Miami, Florida.

However, according to all publications covering this game, the showdown between the Miami Dolphins and the New York Jets took place on September 16, 2018, at the MetLife Stadium in East Rutherford, New Jersey.

So, if the match actually happened in New Jersey, how could the players have been ejected in Miami?!

The Referee’s Name Is Wrong

The report also mentions that the referee was one named Jerry Noonan who threw out these four players for kneeling when the national anthem was being played.

However, according to all official reports of that day, the referee who was in charge of the game between the Miami Dolphins and the New York Jest was Brad Allen. So, this again is a crucial detail that this website got wrong.

The Picture Tells a Wrong Story

The report also carries a photo of a referee ejecting some players off the field even though the players are not shown. The impression given is that this photo is from the game between the Miami Dolphins and the New York Jets played on September 16, 2018, but nothing could be further from the truth.

The photo is actually from a game played between the Miami Dolphins and the Buffalo Bills on December 31, 2017, in Miami Gardens, Florida, where two Miami players were ejected from the game following a skirmish between players of both teams.

Since the photo of the referee ejecting the players is from December 31, 2017, how can the same picture be claimed to be from the game played on September 16, 2018?

It is clear that this vital photo has been manipulated by the website to give a wrong impression that players were ejected from the game played between the Miami Dolphins and the New York Jets on September 16, 2018. It’s just one more instance of a wrong piece of information carried by the report on this website.

No Players Were Ejected

So, in light of all these mistakes in the report and the fact that this website is meant to be a satire, it is clear that no player was ejected from the field for kneeling when the national anthem was being played.

In short, this claim is completely false!