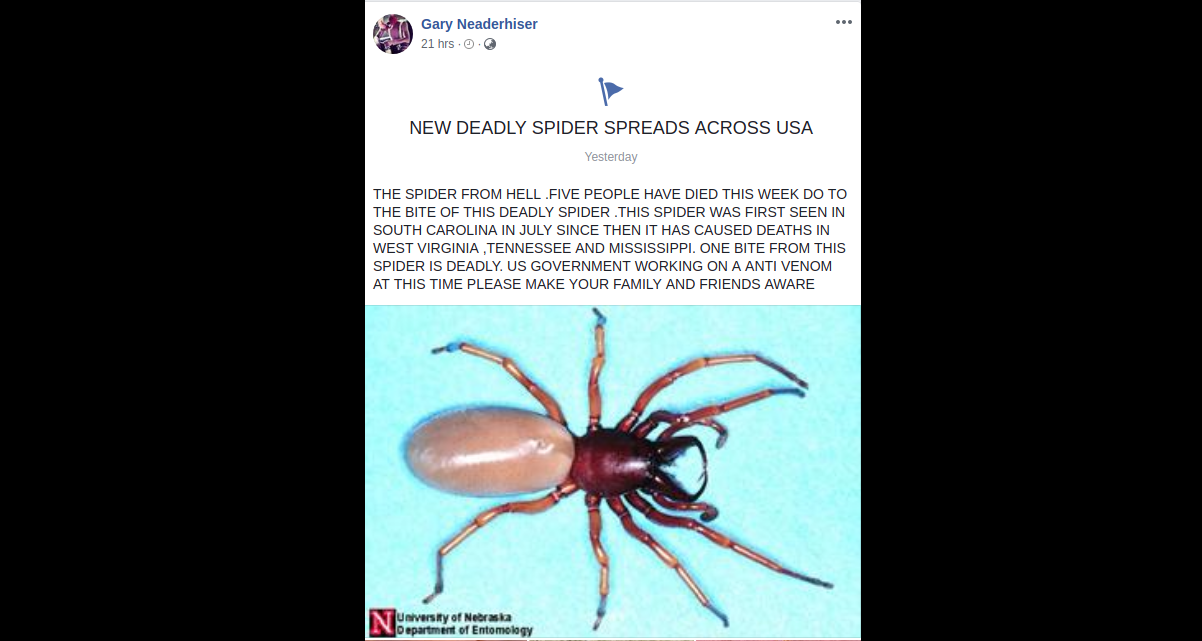 A newly discovered species of spiders in the US has killed people.

A frightening Facebook post claims that a new species of spiders have been discovered in the U.S.—and this new arachnid is supposedly deadly! For a lot of us who are terrified of these eight-legged creatures, this post can trigger an arachnophobe’s worst nightmare; there are more of them to fear! But it’s really just a hoax defaming the poor, already misunderstood spiders.

A New Arachnid Scare in the U.S.? 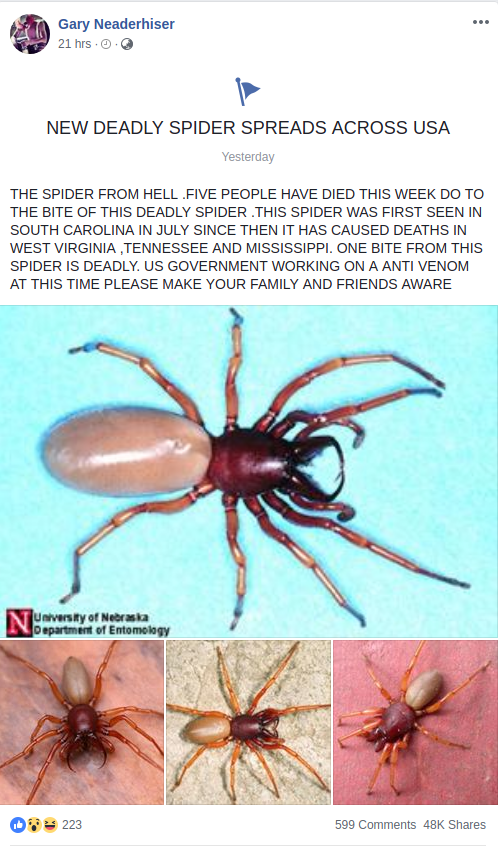 Accompanied with a picture of said deadly “spider from hell,” the post reads that the species was found in South Carolina in July. The spider’s bite is allegedly venomous enough to kill people.

According to the report, people in West Virginia, Tennessee, and Mississippi have allegedly died of this spider’s bite. The species also allegedly killed five people in a week. The U.S. government is supposedly developing an anti-venom to counter this spider’s attack.

But this is all an hoax!

Gary Neaderhiser is just an Internet troll who posts made-up stories, which at first glance could cause hysteria. One of his latest posts claims a headless mannequin stabbed a man in a mall. (So, that’s how ridiculous they can get!) His posts are meant for entertainment’s sake and should be taken with a grain of salt.

As for the spider photographed in the post, it was picked up from an article by the Illinois Department of Public Health. The article sought to debunk the misconceptions about spiders.

A Case of Mistaken Identity

The spider in the post is identified as a woodlouse spider. The tiny half inch arachnid feeds on woodlice, hence the name.

It’s rarely a threat to humans. Like most spider species, it fights back when it feels threatened. A bite from a woodlouse spider is not venomous or deadly. At the most, you’ll experience a little itchiness around the bite.

Their fangs are naturally designed to penetrate woodlice shells. So, they are really strong if they clamp down on human skin and it can be painful. But don’t be fooled; you’re not going to die from it nor is it a grave medical emergency!

The woodlouse spider, however, has the misfortune of bearing a vague resemblance to the brown recluse spider. Recluse or violin spiders are a genus of venomous spiders.

Many have encountered brown recluse spiders and not been bitten by them. Like the woodlouse spider, they too are known to attack only when threatened.

In fact people have dusted off their old clothes only for a woodlouse spider or brown recluse spider to crawl out of them without causing any harm.

There’s no need for fellow arachnophobes to be wary of a new species of eight-legged nightmares in crevices or old shoes. The existing list is stressful enough without hoax claims of a nope “from hell” as is!