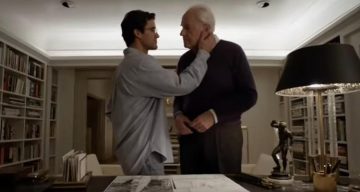 The Assassination of Gianni Versace: American Crime Story retold Andrew Cunanan’s third murder in the latest episode. Lee Miglin, a wealthy Chicago businessman, is depicted as gay in the series. The portrayal of Miglin on ACS is a direct contradiction of what the Miglin family claims. Was Lee Miglin gay? Here’s what you need to know.

The Assassination of Gianni Versace: American Crime Story is tackling Andrew Cunanan’s cross-country murder spree in reverse. Last night’s (January 31) episode showed Cunanan’s halt in Chicago, where he murdered Lee Miglin, a wealthy real estate developer. In ACS, Miglin is shown to be secretly gay and allegedly knew Cunanan. The Miglin family has long contended this claim. However, ACS revived questions about Lee Miglin’s sexuality and his relationship with Cunanan.

The 1997 murder of real estate mogul, Lee Miglin made front page news in Chicago at that time. When Miglin’s corpse was found, his hands, feet, and head were bound with duct tape. He was brutally stabbed with a screwdriver and his throat sawed open with a hacksaw. The killer stayed long enough after the murder to eat and shave. The autopsy revealed no signs of a sexual act.

In ACS, 72-year-old Miglin (Mike Farrell) is shown talking with 27-year-old Cunanan (Darren Criss). Cunanan visits Miglin while his wife, cosmetics magnate, Marilyn (Judith Light) is away. The show more than hints at Miglin and Cunanan’s affair, and portrays the businessman as tormented by his secret gay life.

Back then, investigators believed there was a connection between Cunanan and his third victim. There was no sign of forced entry and it appeared that Miglin let the killer into his Gold Coast home where he was murdered. It was also clear that Cunanan knew his wife was away for the weekend. The Miglin family contended that it was pure happenstance that Cunanan picked Lee as his victim.

According to reports, Cunanan bragged about visiting Chicago often to visit a sugar daddy who was a real estate tycoon. Now, Cunanan was a pathological liar and it’s very difficult to take what he said at face value. However, witnesses claim to have seen them together. Some sources claim Cunanan knew Lee through his son, actor Duke Miglin.

Miglin’s sexuality is still a contentious issue. He married Marilyn Klecka when she was 20 and he was 34. They had two children, Marlena and Duke. They had been married for 38 years when he was murdered. After her husband’s death, Marilyn threw herself back into work to get over her grief.

When he first began his murder spree, Cunanan was seemingly killing ex-lovers, or those he thought infected him with HIV (his autopsy revealed he was HIV negative). Marilyn and Duke Miglin repeatedly claimed that Lee and Cunanan had no relationship whatsoever and his death, like the episode’s title, was a “Random Killing.”

ACS producer, Brad Simpson said, ”Based on the evidence, we believe that Lee and Andrew did know each other, and [that] Andrew’s attack, as with all his victims except for William Reese, was targeted and specific.”

Whether or not Lee was a closeted gay man who had a secret relationship with his killer is not known. As Simpson said, “what specifically happened in the moments leading up to Lee Miglin’s death is known only by Andrew and Lee. This is true for almost all of Andrew’s victims.”