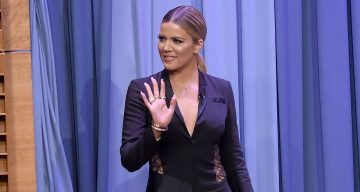 inTouch Weekly is sure Khloe Kardashian has called it quits regarding Keeping Up With The Kardashians! Blames her pregnancy for the exit from the hit reality TV show!

The Kardashians are always up to something, but most of the things they do stem from their beloved TV show, Keeping Up with the Kardashians. Khloe Kardashian, who is pregnant, is one of the main cast members and has been a part of the show since its inception. Seeing her go will devastate a lot of fans, but hold on! It doesn’t look like she’s going anywhere, and EarnTheNecklace.com tells you why.

A heavily pregnant Khloe Kardashian is about to give birth to her first child soon! The KUWTK star updates her app now and then, giving fans details about her final weeks of pregnancy.

Khloe Kardashian and Tristan Thompson are more than eager to meet their baby. But wouldn’t her post-pregnancy be TV gold on KUWTK?

According to In Touch Weekly, Khloe is quitting the show! But is it true?

Quitting Up with the Kardashians?

In Touch Weekly claims that Khloe Kardashian is about to say goodbye to the reality show that made the Kardashians what they are today because she is “ready for a change.”

The celebrity gossip magazine has also stated on their website that Khloe now wants to focus on her family more than the TV show. Um, but wasn’t KUWTK all about her family?

According to them, Khloe is also trying to “keep an eye” on Tristan Thompson. Before he got with Khloe, he allegedly dumped his ex, Jordan Craig, while she was still pregnant with his son, Prince Thompson.

The source who allegedly spilled the beans to the magazine even told them that Kardashian is afraid that the same thing might happen to her, which is why she wants to be by his side all the time!

This piece of information was apparently given to them by an “insider” who is allowed to reveal such intimate and sensitive information. However, we know that there is no proof supporting the claims.

E! Network, the channel that airs KUWTK, constantly updates the fans with the smallest of developments on the TV show. As of yet, they have said nothing regarding this ginormous piece of information. Also, even as of this morning, Khloe is posting snaps of her very pregnant belly, offering insight as to what her and Tristan are doing before the baby arrives. Clearly, she wants to share everything with her fans so it really doesn’t make sense why she would quit the show.

Khloe Kardashian quitting KUWTK would have become a breaking story by now. But story appears to be false, as it only being spread by the magazine in question.

In Touch Weekly is also claiming that momager Kris Jenner is “furious” with her daughter for quitting the franchise. The magazine also drags Kim Kardashian and Kourtney Kardashian in the mix, claiming that they also want their sister to stay on the show, stuffing the statement with further unproven facts.

If there were any credibility to the news, the active social media star would have definitely addressed her fans about it before season 15 airs on TV.

Since neither Khloe Kardashian nor E! has confirmed such news, there is only a great next season to look forward to (with Khloe in it).

Head over to the reality show’s official Instagram page (@kuwtk) to see that the company who produces the show is very much in love with Khloe Kardashian!

Where Is Khloe Kardashian Now?

It was announced that Khloe Kardashian was moving to Ohio for the baby’s delivery, which is Tristan Thompson’s hometown.

Kardashian is currently enjoying her time in her and Thompson’s home in Cleveland before her due date arrives.

“So, while we wait, I have to stay busy. I’m not the type to lay around all day and be lazy (when I do, I get a little crazy!). I’ve already finished the nursery, so I’m happy to have that checked off the list,” the 33-year-old reality star posted on her app.

Do you see how Kardashian is keeping her fans up to date with her life? Why would she do that if she was planning to quit the show?

Furthermore, the Kardashians’ main source of income is the TV show. It was also revealed that they have signed a contract with E! until at least 2020.

Fans would want to see Kardashian and her baby on TV. And we’re pretty sure that she is not about to disappoint her fans!

We at EarnTheNecklace.com are happy to report that Khloe Kardashian is here to stay and entertain us with her new journey as a mom!