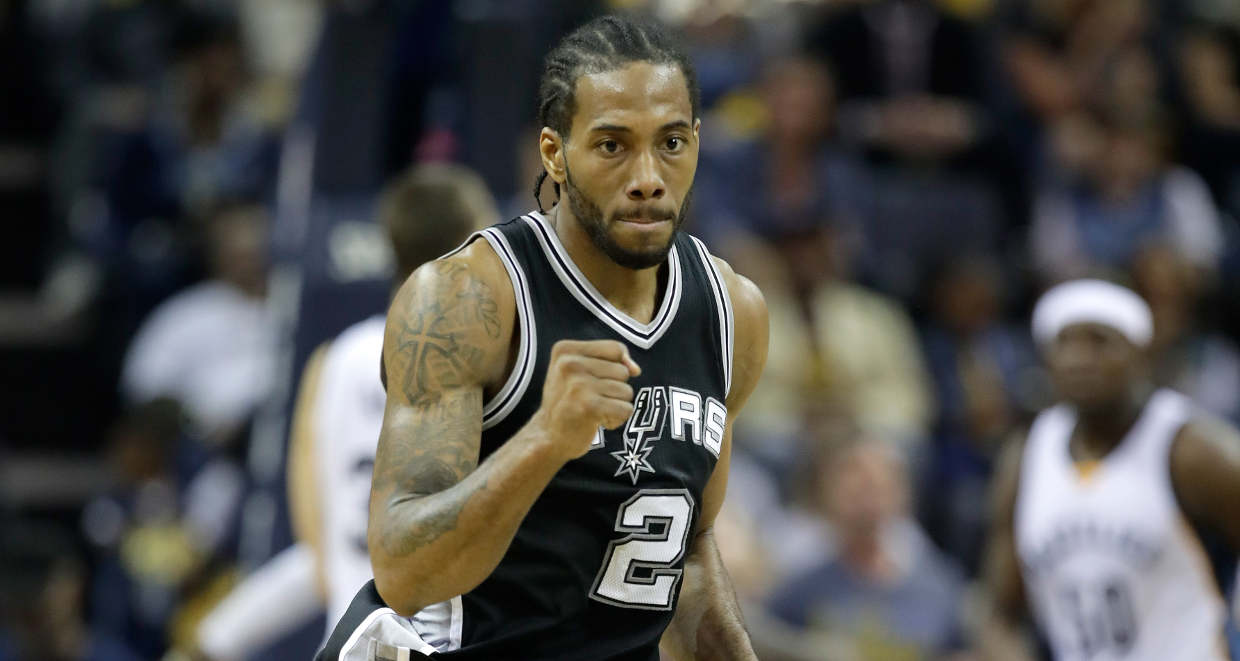 Kawhi Leonard #2 of the San Antonio Spurs pumps his fist after making a three point shot against the Memphis Grizzlies in game four of the Western Conference Quarterfinals during the 2017 NBA Playoffs at FedExForum on April 22, 2017 in Memphis, Tennessee. Credits: AndyLyons/Staff/GettyImages

The rumor that star forward of the Spurs, Kawhi Leonard, has not been answering phone calls due to coach Gregg Popovich, is all over social media! The reason for him going under the radar is speculated to be because of his difference of opinion with the coach over Donald Trump’s presidency.

While most pro-Trump San Antonio Spurs fans are finding it harder and harder to love their team, rumors of Kawhi Leonard ditching his team have begun to pop up. The player was not seen at the recent game against the Golden State Warriors (which the Spurs lost).

Although Leonard is taking a time-out for an injury, fans are convinced his beef with coach Gregg Popovich is what is creating problems. This fake news has spread like wildfire!

Is Gregg Popovich the Problem?

Coach Popovich has definitely established himself to be anti-Trump, we all got that. But has he been able to ponder over the repercussions of his comments?

The coach of the San Antonio Spurs seems to have insulted more than half of the team’s fan base. And while there are many on the team itself who are Trump supporters, the fans seem to have taken a bigger hit this time.

A Washington Post article suggested how Coach Pop’s comments have disturbed the minds of the fans of both Trump and the Spurs. However, he doesn’t seem to care about it.

Popovich went on camera to state that he is not the least bit affected by the newspaper’s article or the fans’ plight. He also reassured us that the organization has not objected against the expression of his views and opinions on the matter.

But how does all this connect to Kawhi Leonard?

Leonard Stays Mum about It All

A fake image of Kawhi Leonard’s statement to Bleacher Report claiming to be a Trump supporter goes viral. Credits: Facebook.

The fake image (which has now been removed from Facebook) alleged that Kawhi Leonard told Bleacher Report: “I am growing tired of people questioning my loyalty and trust for a team. I love the Spurs, and I once loved Coach Pop. But I am now questioning his respect for my country. I refuse to play while he continues to berate our president, my president on a national scale. I am tired of constantly being ridiculed by him about the person that I voted for. I felt it was time to take a stand. I hope and pray that you understand.”

But there is absolutely no proof to support this designed statement! Bleacher Report did not publish an article stating Leonard made this statement nor has Leonard himself come forward to confirm the statement.

The lengthy and detailed statement is creating mayhem in the basketball world. Some fans have believed it to be a legitimate statement from the player himself and they now believe that Kawhi Leonard voted for Trump!

But this concocted point of view seems to be coming at a time when Leonard is on temporary leave to recover from his quadriceps injury.

He is on rest, which can also be one of the reasons he has not come out in the media to put a stop to any of these rumors.

See what coach Pop had to say about Leonard’s injury when asked when the player would return:

Gregg Popovich’s response when asked if we will see Kawhi Leonard at all in this series. #Spurs pic.twitter.com/Gjd03xDzKm

While many are begging to keep politics out of sports, the deadly combination only seems to be growing in size. Remember the “kneel” tweet made by Trump?

People from both camps are not making it easy for sports fans. And now, the nationwide issue of why Kawhi Leonard has not been answering texts and phone calls has made it worse.

Although speculations are plenty, they are likely far from the truth.

The exact reason for Leonard’s indifference towards his team is still unknown, and the player has not come forward to comment on the ongoing stew.

However, sources say that Kawhi Leonard’s medical team wants him to continue rehab for a better recovery, which is a more believable piece of news.

Not the First Time Bleacher Report Was Dragged in the Mud

When a personality of Leonard’s status releases a statement of this gravity, there would’ve been more details that would have popped up by now.

Moreover, his teammates would have also been interviewed as it involves them too, along with interviewing coach Pop himself regarding the statement.

Considering there is nothing else to go on, apart from a picture circulating on social media, we know that the statement is a fake.

Plus, there have been many instances in the past when Bleacher Report was targeted, even though they have been a leader in online sports news for years.

While the site makes sure they call out the fake in statements whenever possible, other sites like Deadspin have taken an unnecessary jab at them.

Even in the past, the site haters have mentioned how the site only caters to the masses, and have catchy headlines which are not always the full truth.

Nonetheless, the site remains in the world’s top three best for sports online, and as they say, haters are going to hate!