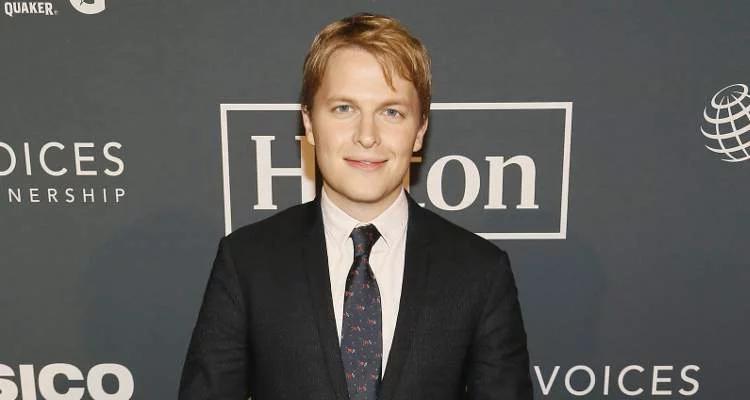 Woody Allen allegedly said Ronan Farrow was Frank Sinatra’s son! The debate has been on for years now, and while many feel that physically Farrow looks like a carbon copy of Sinatra, some believe he might be his biological father too. Mia Farrow (mother to Ronan) was after all married to Frank Sinatra.

In a Vanity Fair article, Mia Farrow suggested that it’s a “possibility” that Ronan could be Frank Sinatra’s son. The statement sent the media into a frenzy, and many fans ended up comparing pictures of Sinatra and Farrow for any resemblance they could find. What is the truth?

A major revelation of whose son Ronan Farrow is was made by both Woody Allen and Mia Farrow. Though they released these statements separately, they do point towards one speculative thing—Ronan Farrow is not Woody Allen’s son. Is there any concrete proof to the statement? See photo comparisons and decide for yourself!

The speculation fire is receiving fuel from one piece of history. Mia Farrow was married to legendary singer Frank Sinatra in 1966, and the couple tied the knot in Las Vegas. Mia was just a 21-year-old at the time, and Sinatra was 50. After the wedding, he wanted her to let go of her acting career, to which she agreed.

Farrow followed Sinatra to all his filming schedules but soon grew tired of whiling away time. She signed on to the film Rosemary’s Baby, after which things took a bad turn. Her timings and shooting schedules usually went on for longer hours, which reportedly angered the singer. By 1967, they were already looking at divorce papers.

1967 saw the end of the Farrow-Sinatra relationship.

our dear friend Roddy McDowell took this photo. We were in Vegas where Frank was doing shows. We were so in love and happy ❤️

Mia Farrow married Oscar-winning director, Woody Allen in 1979. Over the course of their marriage, which lasted until 1992, Mia adopted seven children and had four biological children, one of which was Ronan Farrow, who was born in 1987.

The timeline of Farrow’s relationships can lead to many speculations, but since no star has made it clear, there is no confirmation to them.

Woody Allen was accused of sexually abusing their daughter, Dylan Farrow. In the past, his ex-wife claims to have caught him having an affair with their adopted daughter, Soon-Yi, after which she decided to end things with the director.

A Shot in the Dark

The speculation was furthered, after Farrow gave an eye-popping interview with Vanity Fair who wrote, “I asked Mia point-blank if Ronan was the son of Frank Sinatra. ‘Possibly,’ she answered. (No DNA tests have been done.)”

Ronan himself has also weighed in on the matter, maintaining that “Woody Allen, legally, ethically, personally was absolutely a father in our family.” He said this despite the fact that they’ve been estranged for a number of years following Dylan’s sexual assault allegations against Allen, combined with the romantic relationship with his adopted sister, Soon-Yi Previn.

Ronan also stated that “[Woody] is my father married to my sister. That makes me his son and his brother-in-law. That is such a moral transgression.”  Soon-Yi is the adopted daughter of Mia Farrow and musician André Previn.

Allen also had something to say about the rumor. “In my opinion, he’s my child,” he commented in a 2018 New York Magazine article. “I think he is, but I wouldn’t bet my life on it. I paid child support for him his whole childhood, and I don’t think that’s very fair if he’s not mine.”

Sinatra’s daughter, Nancy Sinatra says Mia Farrow’s son being her brother is “nonsense.” The entire Sinatra household was rather distraught about Farrow’s insinuation, but bear no ill will to the Farrows. Reportedly, they consider Mia and Ronan to be like family.

Amid all the hearsay regarding Ronan’s biological father, Nancy appeared on CBS Sunday Morning in 2015 to try to clear the air. She said, “I was cranky with Mia for even saying, ‘Possibly.’ I was cranky with her for saying that because she knew better, you know, she really did. But she was making a joke! And it was taken very seriously and was just silly, stupid.”

Still, the physical resemblance between Frank Sinatra and Ronan Farrow is uncanny.

Ronan Farrow is a Pulitzer Prize-winning investigative journalist. His in-depth reporting on the Harvey Weinstein and Matt Lauer sexual misconduct allegations served as catalysts for the #MeToo and #TimesUp movements in Hollywood and beyond.

His informative works have appeared in such prestigious publications as the Los Angeles Times, The Wall Street Journal, and The Washington Post.

He’s written two books, War on Peace (2018) and Catch and Kill: Lies, Spies, and a Conspiracy to Protect Predators (2019). The latter was just recently released and is already receiving critical acclaim. A third book called Pandora’s Box: How American Military Aid Creates America’s Enemies is expected to be released sometime in 2020.

Ronan just recently became engaged to his long-time boyfriend, Hollywood screenwriter Jon Lovett. The couple started dating in 2011 and have been going steady ever since.

In Catch and Kill, Ronan writes: “It had been a long year for me—and for us—but we hung in there. Later, when I decided some of that reporting would make its way into a book, I’d send him a draft and put in a question, right on this page: “Marriage? On the moon or even here on Earth?”

According to Ronan’s version of events, “[Jon] read the draft and found the proposal here and said, ‘Sure.’” And the rest is history.