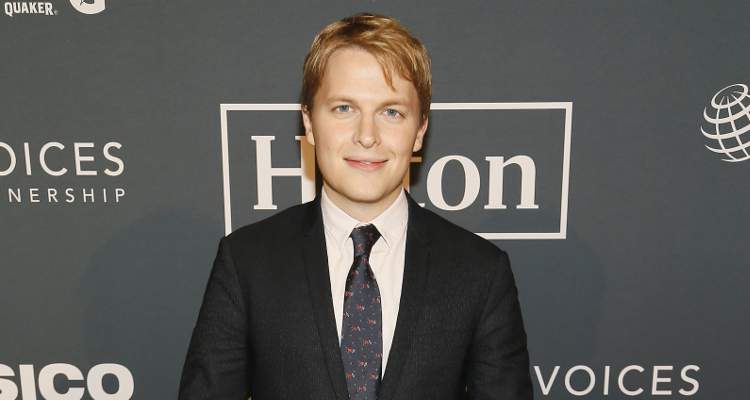 Ronan Farrow’s interview with The Hollywood Reporter has revived questions about his family and his sexuality. For a long time people have wondered if Ronan Farrow is gay and if he’s dating Jon Lovett.

After Ronan Farrow helped bring down Harvey Weinstein’s empire, much of the focus has turned to him. The son of Mia Farrow has endured several scandals surrounding his family, and some of his own. For a long time, people have wondered if Ronan Farrow is gay. There are also questions about Ronan Farrow’s alleged boyfriend, Jon Lovett.

Ronan Farrow has seen second generation fame like no other. Woody Allen and Mia Farrow’s son witnessed the breakdown of his parents’ marriage, endured questions about Frank Sinatra being his father, outed his sister, Dylan’s sexual abuse at the hands of his father, and exposed Harvey Weinstein’s sexual misconduct in The New Yorker. In a recent interview with The Hollywood Reporter, he answered a lot of questions about his family and investigating Weinstein. But he dodged old questions about his sexuality. Read all about the rumors surrounding Ronan Farrow’s sexuality here.

Though there are several accounts that claim Ronan Farrow is gay, there is a lack of concrete evidence, and he has not outright come out and admitted it himself. For a long time, he’s reportedly been romantically linked to Jon Lovett, a media personality, comedic, host of the political podcast, Pod Save America, and Obama’s former speechwriter.

In his THR interview, Farrow cryptically stated that he and Lovett are “close” but didn’t label their relationship. They are currently on a trip around Scandinavia and Farrow celebrated his birthday at Lovett’s L.A. residence.

Lovett has been by Farrow and his family’s side through thick and thin. He even openly supports Dylan Farrow as she time and again calls on Hollywood to turn its back on Woody Allen. But Farrow’s rumored boyfriend, like him, hasn’t disclosed his sexuality. Nevertheless, he’s a vocal supporter of the LGBTQ community.

Farrow’s sexuality has been a continuing question for a long time. According to a report, he did not want to be labeled as bisexual but reportedly dated both men and women. In another report, men who claim to have slept with Farrow said he is gay. However, none of these accounts are corroborated.

Hollywood, it seems, is not very keen to know about Ronan Farrow’s sexuality. He is an accomplished person who got his Bachelor’s degree in philosophy at 15, graduated Yale Law School at 21, was awarded the prestigious Rhodes Scholarship, served in the Obama administration, and became one of the most lauded young journalists today.

Despite his individual achievements, Farrow’s pedigree and the infamy that comes with it take prominence in the media. A lot more people want to find out if he’s really Frank Sinatra’s son, the highly publicized separation of his parents, his estranged relationship with Woody Allen, and his sisters, Dylan and Soon-Yi.

Farrow’s relationships, whether with men or women, are heavily speculated on but pale in comparison to the scandals that follow his family. Nevertheless, the LGBTQ community has repeatedly called for him to come out of the closet.

The chances of the 30-year-old revealing his own sexuality are slim. As the famous profiles on the charming man published by Vanity Fair and The New York Times have said, growing up in the public eye has made him very guarded about his private life.

He’s got an HBO documentary deal in the works, a book on foreign policy coming up, and another investigative piece coming up. But, we don’t suppose he’ll talk about his sexuality in any of them, as it seems he’s worked hard to keep a lid on that information.

All I can say is I worked with these women over many months and they went on the record facing career annihilation & re-traumatization. I hope the courage of @AsiaArgento @RoArquette @MiraSorvino @rosemcgowan @AnnabellSciorra @dhlovelife is a model for others struggling to speak. https://t.co/JFJBtlLVwZ