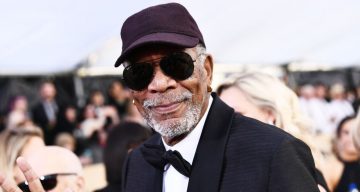 Fans and admirers of famous actor Morgan Freeman were shocked to hear the news that he passed away on April 1, 2018. This news spread fast on social media and had people scrambling for confirmation. We decided to check the veracity of this news, so keep reading to find out what really happened.

Many took to social media where they displayed their shock, disbelief, and confusion at this news as Freeman is a much loved and respected actor. And his millions of fans were bewildered at this apparent tragic news, too.

The devastating news came on April 1st, just a few months after a similar report had come out on October 5, 2017, that Freeman had died. (Remember folks, it was April 1st!)

Being on the internet on April fools is the worst. I’ve read posts on greys anatomy ending after season 14 and Morgan Freeman being dead. Like there’s a line, and these types of posts crosses it.

Previous News of Death was a Hoax

Thankfully, the October report was nailed to be a lie a few days later, as Freeman was very much alive. The actor even posted pictures on his Instagram account in January 2018 to show his fans that the report was nothing more than a hoax!

However, no one can assume right away that the April 1 news is a hoax because Freeman is 80 years old. Many wouldn’t be that shocked. So, a deeper look is required to determine what the truth is.

No Mention in the Media

We at EarnTheNecklace.com conducted a thorough search on the Internet to check if there was any proof that Freeman died on April 1, 2018. Major celebrity outlets such as TMZ and People have not reported anything on this matter. In fact, there is no mention of Freeman dying on April 1 at all.

If Morgan Freeman had really died on April 1, 2018, there would have been some statement from his family or official spokesman by now. Not to mention, he’s famous enough that at least one major reputable news source would have covered it! After all, Freeman is a Hollywood celebrity, and even the smallest news about him makes waves in the public domain.

As of now, there has been no statement from his official spokesman or his family about his reported death.

Every year, there are fake news reports on April Fool’s Day about celebrities dying or other such tragic outcomes. Many come to know of these reports and immediately want to confirm the news they’ve received and search the Internet for the truth.

There are other sources like radio and newspapers to access credible news to check out the facts. That’s what we did at our end and here is what we found.

The Timing of the News Is Suspect

The news of the death of Morgan Freeman on April Fool’s Day was a shock to many. However, April 1st is a day when people spread all kind of fake news on various social media platforms and even via word of mouth.

Despite its occurrence every year, many people forget about April Fool’s Day and get taken for a ride by fake news spreaders! And we believe that Freeman’s supposed death is also such an incident.

All this convinces us that Morgan Freeman is not dead but very much alive. There is absolutely no news on any credible media—be it print, radio, electronic, and online—about the veteran actor’s death.

We conclude that the news of Morgan Freeman dying on April 1, 2018, is nothing but a distasteful April Fool’s Day hoax. So, the claim appears to be false, folks!