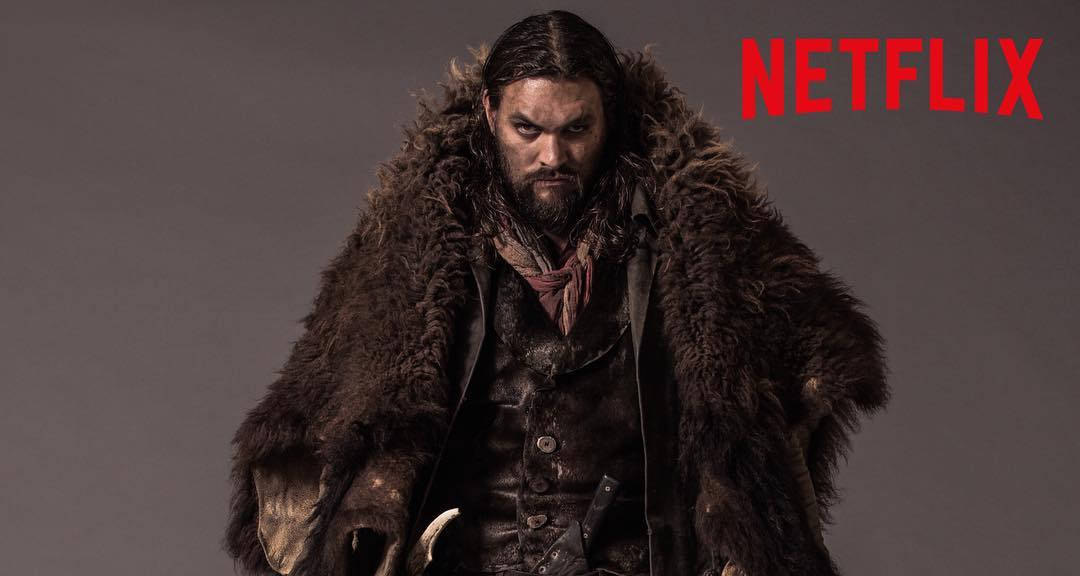 The popular video game, God of War, is getting its own Netflix original series starring Jason Momoa.

If you’re an avid player of the PS4 game, God of War, and have seen a poster of a God of War series on Netflix, you’re probably psyched. A poster shows that Netflix is set to release a God of War series starring Aquaman’s Jason Momoa as the protagonist, Kratos. While we’ll never get tired of seeing Momoa play another historical brute, this little bit of news is disappointingly fake.

Is God of War Coming to Netflix?

The poster claims that a new Netflix original series based on the Sony game, God of War, is coming on July 15, 2018.

A series on your favorite game is every player’s dream. So, fans of God of War were, of course, over the moon with this news. And many also believed it was real. 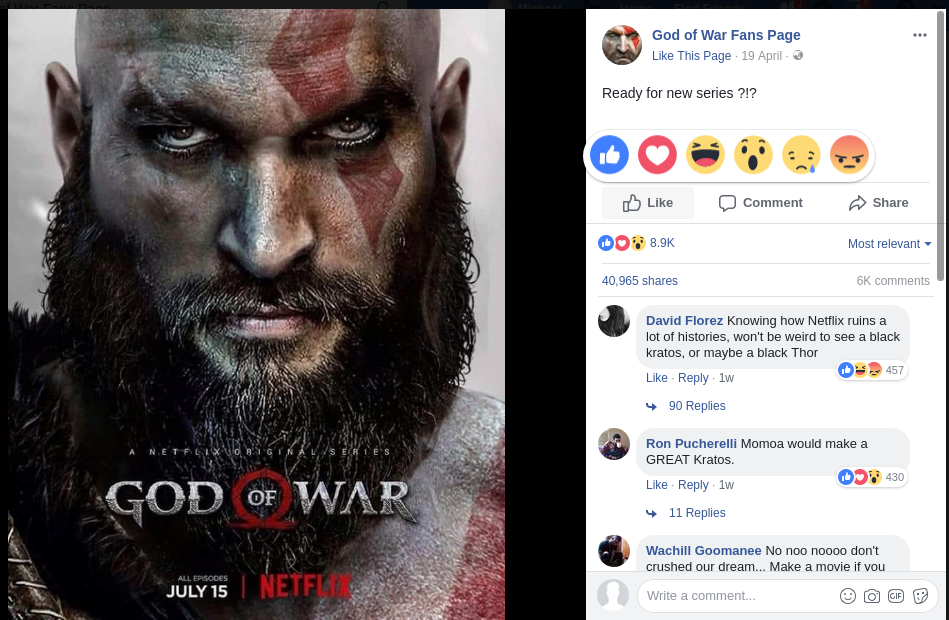 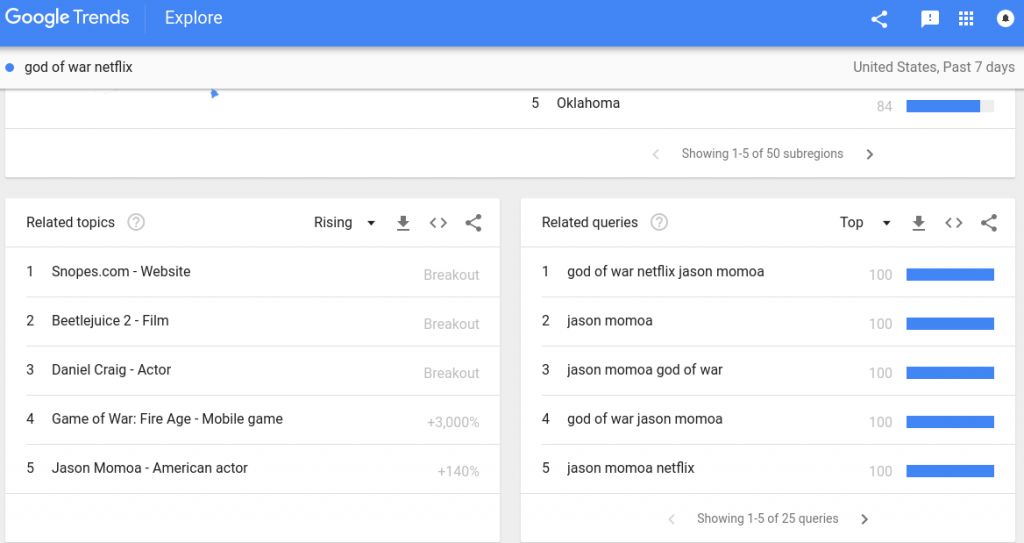 There are also queries related to Daniel Craig. But more on that later. 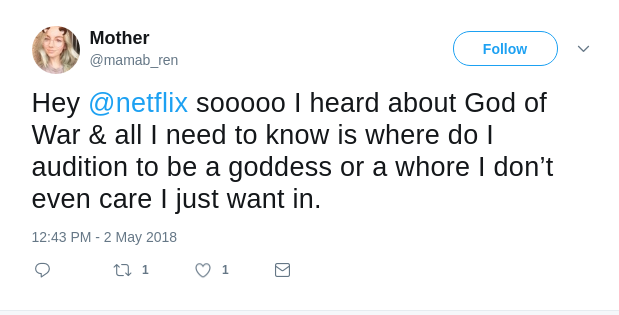 And maybe Momoa added to the hype some six years ago. The actor was at Comic-Con where he gushed he would love to play Kratos.

So, there was low-key excitement for Khal Drogo to switch to the Greek lore until the poster came along. And then the hype felt real.

As much of a blockbuster of an announcement a God of War series would be, sadly, it’s not true. (We understand the disappointment, but don’t kill the messenger.) 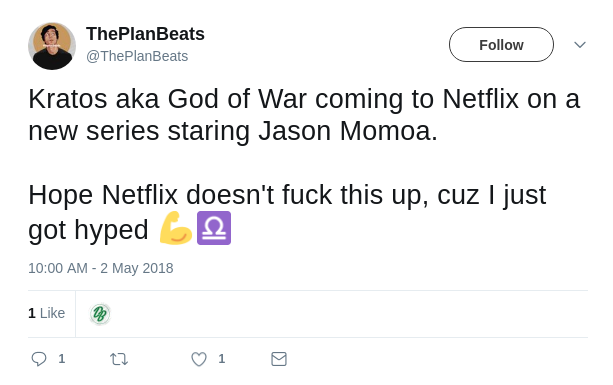 The deceptive poster first appeared on a God of War Facebook fan page back in April. The post received over 40K shares and 8.9K likes. 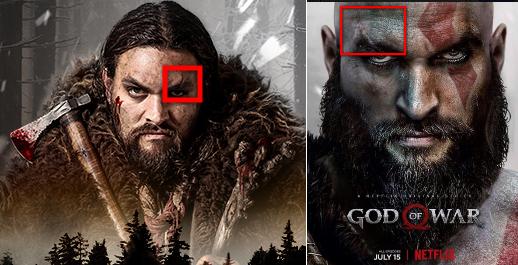 Back then, Internet sleuths were also quick to notice that the poster is photoshopped. One digital Sherlock was able to pinpoint that Momoa’s image from his Frontier promotional pictures was digitally altered to make him look like Kratos. 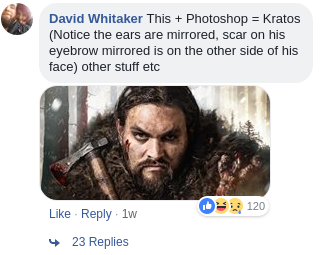 If you look closer, Momoa’s signature scar has changed places from his left brow to his right. His right eye bears Kratos’ identifiable red mark on the poster.

It’s pretty obvious just from the scar that Momoa’s original image was mirrored in the fake poster.

Perhaps an enthusiastic fan saw the video of Momoa expressing interest in Kratos’ role and made the poster. But it’s still not real.

What Is the God of War on Netflix?

A new edition of God of War released on April 20 sees Sony’s popular PlayStation 4 franchise switch from the tried-and-true Greek mythology to a Norse plot line.

The main characters are Kratos, the Greek God of War, and his son, Atreus, who doesn’t know of his father’s divine identity.

The latest edition of the game follows the father and son’s attempt to fulfill Kratos’ wife’s dying wish while fighting gods and monsters of the Norse world.

After Game of Thrones, Frontier, Conan the Barbarian, and Aquaman, Jason Momoa has proven he’s a perfect fit for the fantastical warrior protagonist. We could even say that Kratos was tailor-made for Momoa. 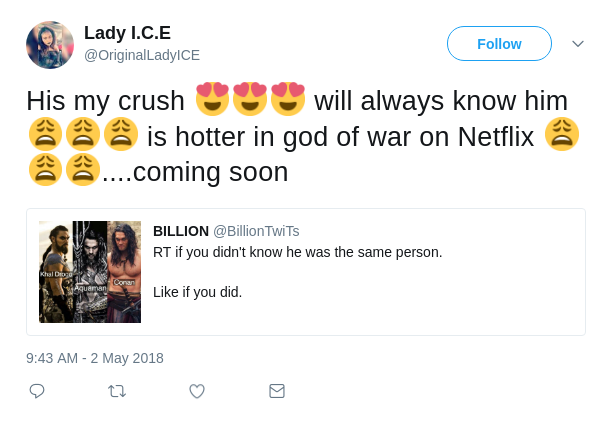 But it appears that the poster of Momoa as Kratos is fan-made. (And fairly well-made at that!)

Netflix hasn’t announced a God of War series. And neither is a series being produced for a July release.

The streaming giant’s schedule for July 2018 doesn’t mention God of War either.

There is a God of War on Netflix, but it’s not what you think. The Chinese period movie was released in 2017 and stars Vincent Zhao, Sammo Hung, and Yasuaki Kurata.

The film may not have Kratos, but we recommend it as a good watch. 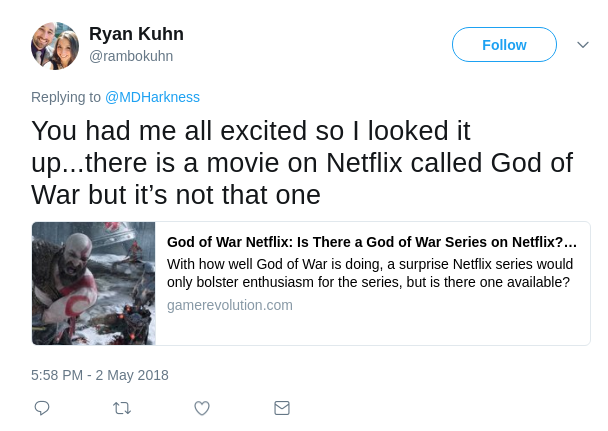 So, does Sony plan to expand God of War to a series or a movie?

It’s hard to say. But there has been talk from the creators of the game that they were developing a script for a feature-length adaptation.

Word has it that Daniel Craig was originally considered to play Kratos. But he reportedly turned down the script, and the God of War multimedia project fell through. 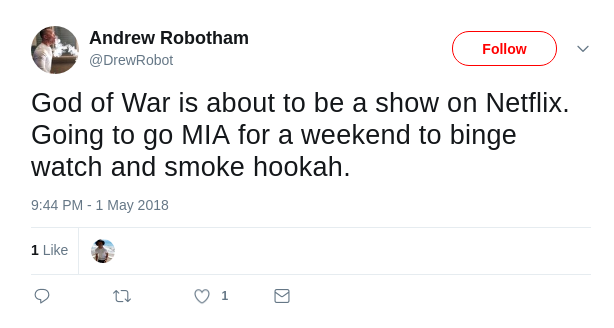 Several attempts have been made to turn God of War into a movie. But it doesn’t appear to be happening anytime soon.

The PS4 series continues to grow with an advancing story line. But Sony hasn’t made it clear if it plans to adapt the plot to a series or movie.

Although the poster is fake, we now know that fans can’t imagine anyone but Jason Momoa as Kratos. (No offense Daniel Craig!)

Now that Netflix knows #TheHypeIsReal, they should just produce a God of War series.