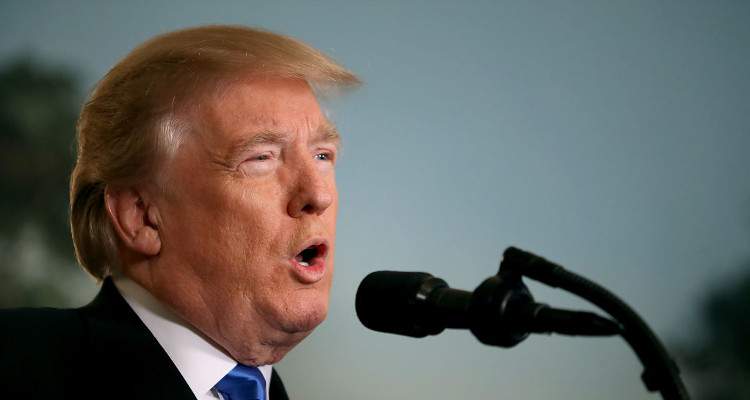 Some viewers who watched President Donald Trump’s speech on Wednesday, December 6, 2017, to announce that the US would recognize Jerusalem as the capital of Israel have noted on the Internet that Trump was slurring his words. They are openly speculating about what it could mean.

After President Donald Trump gave a speech about the U.S. officially acknowledging Jerusalem as the capital of Israel, the Internet was agog with rumors that his speech was slurred because he had suffered a stroke. Some experts weighed in on this and have said that though it does appear that there was some slurring, there isn’t enough evidence right now to conclude that the president had any health problems, like a stroke or a heart attack. So, this rumor cannot be proved currently.

President Donald Trump was communicating to the nation that the U.S. had finally officially recognized the city of Jerusalem as the capital of Israel, something the past presidents had promised to do, but ultimately did not. Some people who were watching Trump closely on their screens feel that he was slurring toward the end of his speech and have expressed their opinions on the Internet via Twitter, Facebook, and other social media outlets. They feel that Trump’s regular speech pattern was changed and he had difficulty pronouncing some words. Many are wondering, Did Donald Trump have a stroke? Many are already developing theories on why Trump was allegedly slurring his words while others are growing concerned about the President’s health. Did Donald Trump have a mini-stroke? What’s up with Donald Trump’s speech?

The Opinions of Experts

While the Internet is agog with these questions, some health experts who saw Trump on TV have given their professional opinion on what’s going on. Like CNN’s Chief Medical Correspondent Dr. Sanjay Gupta, a practicing neurosurgeon said, “There is clearly some abnormalities of his speech. You could call it slurring or just a little bit of difficulty forming the words.” And Michael de Riesthal, a speech and language pathologist, said: “There was definitely some imprecise progressive change in articulatory precision and slowing of his speech that is not typical in normal speech.” De Riesthal pointed out that the distortion was clearly noticeable when Trump said “United States” during his 10-11 minute speech.

Even though neither Dr. Gupta nor De Riesthal has ever treated Trump, both of them are experts in their respective fields and speak with an authority derived from many years of field experience. The official term for slurred speech is “Dysarthria,” and in this condition, the muscles one uses to speak weaken or it is tough to control their usage. People can also slur their words for different reasons like because of a nervous system disorder like a brain tumor or a stroke. It could also be due to them suffering from a disease like cerebral palsy, muscular dystrophy, Lyme disease, Huntington’s, Myasthenia gravis, ALS, Parkinson’s, or Wilson’s.

6 of 6?Above all, our greatest hope is for peace – the universal yearning in every human soul. With today's action, I reaffirm my administration's longstanding commitment to a future of peace and security in the region.

So, did President Donald Trump suffer from a stroke or mini-stroke? After all, people slur their words even when they are just simply tired. Or if they are on medication. So, what accounts for the perceived abnormalities in Donald Trump’s speech? After the speech was over, Trump walked up to a desk, pulled back a chair, sat down, and signed the document. All this would probably not have happened if Trump was really suffering from a stroke. According to Dr. Gupta, “All of that is relevant because he doesn’t appear to have any motor weakness.” The White House has denied any such problem with Trump, and an official said: “The president is perfectly healthy; he’s been working in meetings all day and in fact is still here working now.” So, given the footage available, opinions from experts, and the word from the White House official, one cannot say with certainty that Donald Trump has suffered a stroke. So, the claims of the people who think so are unproven! You can thank the rumor mill for this one!